Carroll is drawn to the eccentric and the oddball. In sinuous free verse, he limns a series of arresting anecdotes, few longer than a page, as he searches for Homo Americanus. 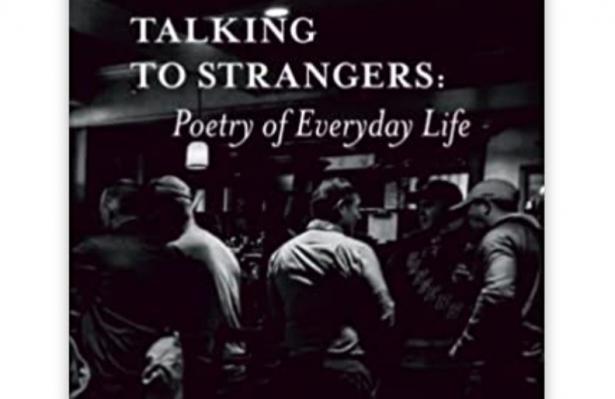 “What is it then between us?” Walt Whitman asked his readers and, not wanting to keep them in suspense, answered immediately, “Whatever it is, it avails not—distance avails not, and place avails not.” Poet-historian Peter Neil Carroll might give the same answer. Like Whitman he is fascinated with his fellow countrymen (and women), filled with curiosity and concern for their lives, ragged edges and all.

As in his earlier volumes, Carroll’s new book, Talking to Strangers, embraces both the everyday and the out-of-the-way. He finds light and life in people ignored by a culture focused on glamour and celebrity. They have names like Harry, Mario, and Dottie. They are the plainest of the plain.

A few achieve a kind of heroism, a few rise to notoriety. But none of them makes the pages of People or the cameras of Entertainment Tonight. Like earlier chroniclers of the American folk—Edgar Lee Masters and Edward Arlington Robinson come to mind—Carroll is drawn to the eccentric and the oddball. In sinuous free verse, he limns a series of arresting anecdotes, few longer than a page, as he searches for Homo Americanus.

The title poem sets the parameters for these encounters. We find the poet far from his California home, in New York City, “squeezed into a rush-hour / subway, everyone bulked with coats / and backpacks.” As often happens, the train stops in the tunnel for an extended period, and soon the poet is exchanging life stories with a woman from the Caribbean, whose daughter, incidentally, is “obsessed with her hair but she’ll get over it.” The comment elicits recommendations from other passengers for a particular salon and a new hair conditioner. “Free advice running rampant underground, / we’d created a community,” a community based on small kindnesses and a recognition of their common humanity.

In “Wind Chill” a similar camaraderie warms the dark precincts of a Manhattan bar. It’s bitter cold outside, and the man on the stool next to our poet begins by talking about his two brothers and their “contest about who can pee on / the most national monuments.” “I’m from North Dakota,” the man declares, “Ever been?” “Five winters,” the poet admits. “I had to leave to stay alive.” “So you’re a goddam quitter!” his “new friend” exclaims. The two of them, “geezers sitting cozy in a New York bar,” celebrate their mutual vulnerability and momentary escape.

From various anecdotes we learn that the poet is, in fact, one of those Biblical oddballs, a Good Samaritan, given to aiding those in need. It started early, when he gave his stack of Superman comics to another first-grader, the one who didn’t talk in class and had “no lunch to go home to” (“The Gift”). Later we see the poet buying coffee for “a wind-burned man sit[ting] on cardboard” outside of Penn Station (“Arrival”) and paying some recidivist drunk’s taxi fare to rehab (“Samaritans”).

Part 2 details Carroll’s childhood in the Bronx and later Queens, hinting at the sources of his generous disposition. We observe him playing street ball with his pals in the Bronx, a dangerous but necessary preparation for adult life, and flirting with Marjorie, a younger girl who wants him to stay home from kindergarten. “I need to go,” he tells her. “Do you want your husband to be stupid?” Things were different, however, in Queens. In Queens he felt like a “Displaced Person.” The local kids were “braver, wilder than my old gang.” But that too was good preparation for later life: “Uprooted, I never overcame a sense / of unbelonging, a condition I did not / choose and did not mind.” How many of us experience that sense of “unbelonging,” the moment when we question our childish existence and prepare for something unimaginable and different?

Where it led Carroll is to a life as an educator and activist, a partisan of the dispossessed. “A Wound in the Heart,” for instance, sketches his decades-long involvement with the Abraham Lincoln Brigade, American volunteers who fought against the Fascists in the Spanish Civil War.

In particular, we meet two volunteers in the International Brigades, both of them living in Russia. One, Percy Ludwig, is English, “speaks Cockney,” but “his family Jewish Socialists [were] deported back to Russia,” to a life of discrimination and poverty. Morris Cohen, a member of a Russian spy ring, helped steal American atom bomb secrets. Why’d he do it, the poet-historian wants to know? Says Cohen, “It was unthinkable, he replies, for one country to have a monopoly of such terrible weapons. All I want is peace.” Both men seem to represent a kind of heroism in defeat, a realization that darkens Carroll’s political imagination. The losers of that war had better poetry (Lorca!), he tells us, but the fascists won. As Camus noted, one can be right and yet be vanquished, . . . force can subdue the spirit.

And yet as long as people struggle against injustice, hope persists. Patience and irony, counseled Lenin, and in “Imaginary Characters” Carroll directs a steely irony against the anti-democratic forces at large in America. What are these things, corporations and super PACs, granted the rights of citizens by a conservative Supreme Court, who use those rights to suborn the
democratic process? According to Carroll, “The richest persons never go on diets, never binge, they’re pure No-bodies.” Not only do they have no physical existence, they have no reality (except perhaps in the minds of judges). They’re like Scrooge McDuck, the poet tells us, “who quacks with joy when swimming / in pools of dimes and dollar bills,” an image obscene in its surreal greed.

Life is hard, the poet admits. He is getting old, his classmates are dying. “Age makes me quaint,” he observes ruefully in “The Table,” “but the strength of memory remains.” Finally, in “Memory as Hope” he learns that his heart is failing; the surgeon tells him he only has a few years left.

Despite that dire prognosis, he resolves to continue his chosen work, abandoning some projects, finding others, finding also a new kind of peace:

I start over . . .
living my days in time without contagious anger.
I notice nothing important in the world is about me.

Lee Rossi is a winner of the Jack Grapes Poetry Prize and the Steve Kowit Prize. His latest book is Darwin’s Garden, from Moon Tide Press. Individual poems have appeared in The Southwest Review, Rattle, Spillway, The Chiron Review, The Southern Review as well as many other venues. He is a member of the Northern California Book Reviewers and a Contributing Editor to Poetry Flash.