labor Delta Flights Attendants Race To Unionize: ‘We’re the People Behind the Profits’

Workers say they just want a fair deal on pay, conditions and schedules at an airline has long resisted union efforts. 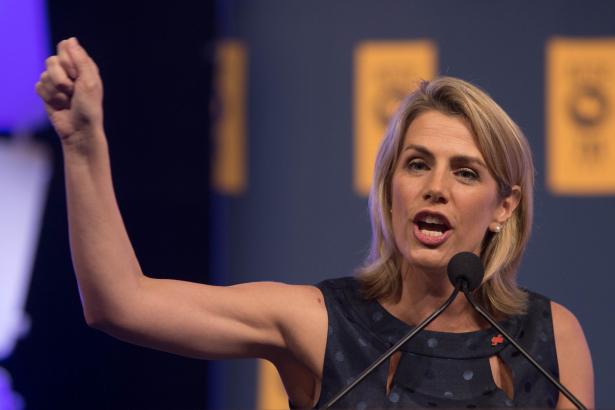 “Delta is a company that has long union-busted, has deep roots in union-busting, and it is integrated into everything the company does,” said Sara Nelson, president of the the Association of Flight Attendants.,en.wikipedia.org/

Workers are racing to gather union authorization cards signed by a supermajority at Delta to trigger a union election over the next few months, as signatures are only valid for one year.

The aim is to allow the airline’s 23,000 flight attendants to vote on whether to unionize with the Association of Flight Attendants-CWA (AFA-CWA) and will face fierce opposition from an airline that has fought previous efforts.

“Delta is a company that has long union-busted, has deep roots in union-busting, and it is integrated into everything the company does,” said Sara Nelson, president of the the Association of Flight Attendants.

Shemeka, a Delta flight attendant based in Atlanta said the Covid pandemic had highlighted how important it is for staff to join a union. She and other flight attendants requested to use their first names only for fear of retaliation as Delta prohibits employees from speaking to the media about the company without approval.

“It’s taking the first step to make our workplace better, not only for me but for my fellow flight attendants, and the ones who follow,” she said. “I would like to have a seat at the table when it comes to negotiating my work group, my compensation, my work-home balance, and the only way to accomplish this is to bring our collective power to the bargaining table.”

Shemeka said the pandemic had been brutal for flight attendants. As air travel has recovered toward pre-pandemic levels, airlines, including Delta, are trying to recover staffing levels after thousands of attendants took voluntary leave or left the company permanently.

“We put up with so much when it came to short-staffing, when it came to being abused by passengers, verbally and physically,” she said. She argued she would have liked to see a better sick policy so workers could afford to take a day off for rest and recuperation amid the stressful working environments they found themselves in.

“There’s a misconception that if you’re pro-union, you’re anti-company. And that’s the furthest thing from the truth,” added Shemeka. “I love my job. I love what I do. We’re just trying to make where we worka better place for the company and the flight attendants.”

Delta has lobbied to try to have any workers who do not submit votes in a union election to count as no votes.

Nelson said that this time around, flight attendants were becoming more comfortable in speaking out about their support for the union amid a surge in public support for unions in the US in general.

Tiffany, a flight attendant in Detroit who started working for Delta in 2010, argued it became evident after the Northwest union contract expired in 2012 what workers were missing.

“Delta told us back then: give us a year, we promise you won’t want your union back. And we realized really quickly how badly we needed our union back and wanted a contract. Every year it’s been, it’s just been more and more broken promises, and it’s gotten progressively worse,” she said.

She said inequity issues have risen without a union contract, as disciplinary actions vary based on the discretion of managers, and that company work policies are often disregarded or changed based on operational needs of Delta, such as scheduling.

“All of those work rules and policies go out the window and they literally do what they want,” she said. “They’re making close to record profits again, and our chief executive is making over $2.5m more than our closest competitors. We, the rank and file, are the people that are behind those profits and we deserve a piece of that pie. We’re organizing because we want a fair share of what we created.”

A spokesperson for Delta disputed claims that its total compensation lags behind its competitors, and emphasized a direct relationship with workers over union representation.

“Delta flight attendants have chosen a direct relationship over union representation three times before because they know that when they speak, we listen and can act,” said the spokesperson in an email.

“We believe the direct relationship our leaders and our people have today is stronger, faster, and more effective in driving improvements at Delta than AFA has shown to be.”