How They Won: Kansas Organizers Unpack Their Big Win for Abortion Rights

The strategies that worked in Kansas – countering misinformation, building a broad coalition – offer lessons for other ballot measures 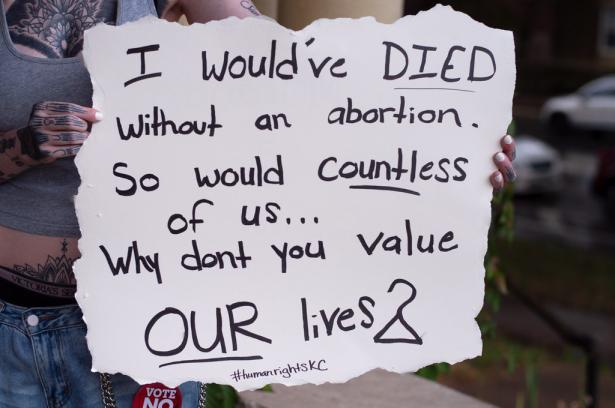 Why don't you value our lives?,JoLynne Martinez (CC BY-NC-ND 2.0)

In February, long before organizers in Kansas had made the hundreds of thousands of calls, knocked on the tens of thousands of doors; or did the thousands of media interviews needed to win a monumental race against an anti-abortion amendment, they started having parties.

Sometimes they were small parties: parties where tea and cookies were handed out, and people sat in living rooms getting to know one another. Other times, they sat around a dinner table, drinking wine with strangers.

And always, there were stories.

“All over the state, people talked about how abortion had impacted their lives or a loved one’s. They were honest with family and friends for the first time in many cases, combatting misinformation and fundraising while they did it. And soon those conversations spread,” said Emily Wales, the president of Planned Parenthood Great Plains, which covers Kansas.

That’s just one tactic used in a campaign that delivered a stunning win for pro-choice advocates in the US, who have faced years of setbacks and shifting goalposts. Long before Roe’s overturn and the scrapping of federal abortion rights, courts in the US have been stacked; legal definitions of life and personhood have been altered; and civil apparatus has been created, allowing individuals to put huge bounties on the heads of those involved in abortion care.

So, despite such a long, careful campaign, it was hard to be certain of victory even as early results showed the no side winning on election night. Organizers became cautiously optimistic when record turnout numbers began filtering in, indicating participation closer to that of a presidential election in some counties. They were still cautiously optimistic when the first big, conservative counties, like Saline county and Sedgewick, swung overwhelmingly in favor of abortion rights.

“The running joke is that I’m still cautiously optimistic,” Kansas for Constitutional Freedom’s spokesperson, Ashley All, said as she stood on the stage with her three children – after the vote to keep state protections for abortion in the Kansas constitution was called.

That reluctance to dare to believe they had done it was based not just on the losses of recent years, but also on an election cycle full of dirty tactics, where the no campaign knew the odds were stacked against them – and they had to fight hard to battle conspiracy theories and misinformation. Nothing was taken for granted.

“At the start, people didn’t even know which way to vote to support abortion rights,” says All, describing a vote that was confusing right down to the name of the amendment and the wording on the ballot.

And then there was the misinformation.

“The biggest challenge was the unwillingness to even acknowledge the current state of the law. We really had to spend a lot of time explaining how the amendment was actually about opening the door for politicians to pass a total ban,” says All.

“The [yes campaign] were essentially trying to use false information, to make it sound like there is no regulation of abortion in Kansas. Clearly, that’s false,” she said, pointing to numerous restrictions in a state where there are just a handful of abortion clinics and a whole host of laws restricting state funding from abortion and restricting its accessibility.

“Typically, abortion opponents have relied on fomenting stigma. They cast abortion as dangerous and in need of regulation. They paint patients essentially as victims. And they paint providers as unscrupulous. And that’s powerful messaging,” added Nash.

So how did they win, and what does this mean for the battle for abortion rights in the US?

The win relied on an organized front that had started long before Roe was overturned. A coalition of pro-choice groups partnered up more than a year ago, including organizations such as Planned Parenthood, ACLU and the League of Women Voters in Kansas.

And they didn’t stop at progressives: with Kansas leaning Republican (44%), with a lot of unaffiliated voters (30%), the coalition had to be broad.

“We really understood that was essential to our survival,” says All, who worked with moderate Republican groups, and even former Republican legislators and their constituents, to get votes for Kansas for Constitutional Freedom (KCF), the pro-choice coalition.

Together that coalition raised millions, out-funding the Catholic church, which poured $3m into the “yes” campaign.

They got the word out using a model that used the strategies typical of a congressional campaign – ads and mailers and phone banking – as well as those typical of a grassroots activist campaign, including volunteer work, door knocking and word of mouth, through events like the house parties mentioned above.

Emily Wales from Planned Parenthood believes the key to success was meeting voters where they were and being truthful: after all, 60% of voters in Kansas did not support restrictions on abortion – about the total proportion who voted against Tuesday’s amendment in the end (59%).

“You can overplay your hand, which is what the [yes campaign] did. They leaned into a lot of theatrics, and in some cases, outright deceiving messages, wholly intended to confuse people. And it undercut trust. All we had to do was be honest with voters,” said Wales.

In Kansas, the battle for abortion rights is far from over – with judicial retention elections, legislative elections and a governor’s race all approaching. And with ballot initiatives like the one in Kansas coming across the country, consensus-building will be crucial, campaigners say.

“We have to be willing to talk to voters across the political spectrum because the vast majority of Americans support access to abortion – whether they are Republican or Libertarian or Democrat,” said KCF’s All.

As ballot initiatives to restrict abortion approach in places like Colorado, Kentucky and Montana; and initiatives to protect them on the horizon in California, Vermont and Michigan, Corrine Rivera Fowler from the Ballot Initiative Strategy Center, which works to put progressive issues on the ballot, says outreach and education is going to be needed.

“[Some of these] are not ‘direct democracy states’,” Fowler says. “People don’t regularly vote on constitutional amendments, which can only be referred by their legislators. The process is unfamiliar to voters. The language may be unfamiliar to them. And so we expect misinformation to continue,” she says.

In Montana she says misinformation has already begun: the ballot refers to “medical care of fetuses”. Meanwhile, in Colorado, citizens are trying to restrict abortion through the ballot for a fourth time, after failing repeatedly.

“We have to continue to be diligent about ensuring that folks understand that these constitutional amendments will likely create a clear no right to abortion protection,” she says.

But the supreme court decision could also have been a shot in the arm for people, and the win in Kansas a much-needed piece of optimism for the pro-choice movement, providing a narrow opening for expanding access to abortion care, the Guttmacher’s Nash says.

“Legislators were very ginned up. They just saw the Dobbs decision eviscerate abortion rights across the country. But now they are being confronted by a wave of people saying: ‘Actually, we want abortion to be available.’ So they are between a rock and a hard place,” she says.

Ultimately, Fowler thinks putting abortion to a direct vote will have better results for the pro-choice movement than relying on legislators, representatives and judges to rule on their behalf.

“I have worked on many pieces of legislation – like paid family leave for employees, and payday lending interest rate caps – where the legislature actually refuses to pass laws. And finally, we had to run ballot measures, and we were able to pass them by large margins,” she says.

“The thing is, is our elected officials are not often representing us.”

Poppy Noor is the Deputy Features editor for Guardian US. Twitter @PoppyNoor.