The author is strongest when he deals with the government’s direct attempts to influence public opinion through comics either through the Writers’ War Board (WWB) of World War II or the creation of propaganda comics during the early Cold War. 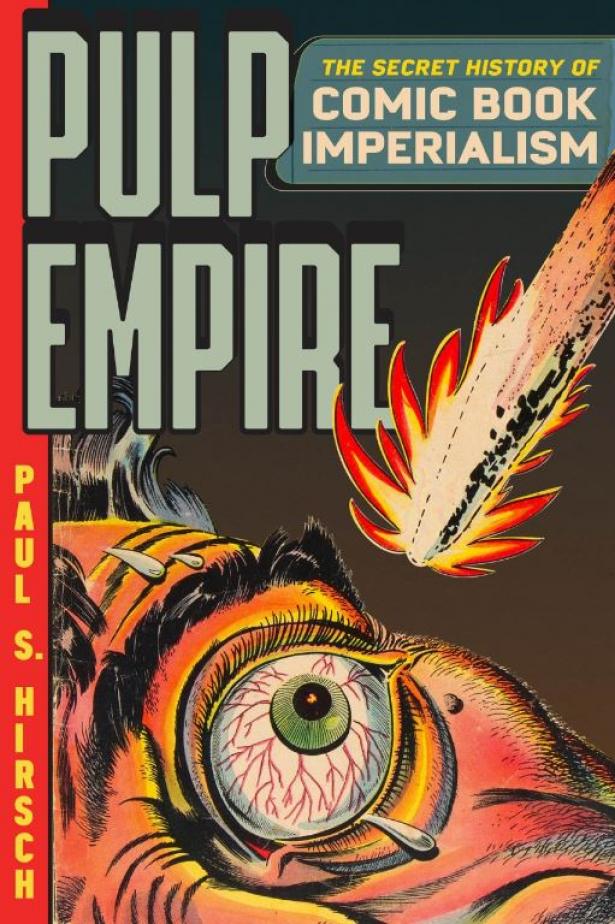 Pulp Empire: A Secret History of Comic Book Imperialism by Paul S. Hirsch is a unique contribution to the sadly underappreciated field of comics studies. Comics are a singular art form in themselves and have had a profound cultural impact as well as providing the basis for countless successful television and film adaptations. Hirsch’s analysis is a welcome one, although the book can be divided into two distinct contributions. The author is strongest when he deals with the government’s direct attempts to influence public opinion through comics either through the Writers’ War Board (WWB) of World War II or the creation of propaganda comics during the early Cold War. However, the book finds itself on shakier ground when it comes to more well-known aspects of comic history.

The University of Chicago Press; 344 pages

First, the story of the Writers’ War Board and its attempts to use comics to foster support for World War II is a corrective to the idea that all anti-fascist comic stories sprung from truly felt patriotic expression on the part of the comics’ creators. While characters like Captain America certainly did spring from the deep feelings of their creators, the government also had a hand in shaping later stories and narratives. Ominously, to fight fascism the Board promoted racial and ethnic hatred of both the Japanese and Germans. Writers were specifically told not to include “good” Germans or Japanese. Instead, all were depicted as supporters of fascism. Hirsch depicts an interesting dichotomy in that the WWB also wanted racially tolerant depictions of Black Americans, which led to unprecedented heroic appearances of Black soldiers and aviators, even if they played a secondary role to white characters.

There is an irony when the propaganda comics of the early Cold War are discussed. The CIA circulated a comic in Guatemala giving instructions on how to assassinate politicians—it is a comic book that is an instruction manual for how to commit a crime. This comic book enterprise was a method of destabilizing the country in advance of CIA Operation PBSUCCESS, which brought down the left-leaning Arbenz government and replaced him with a ruler more amicable to American business interests. At this same point in history, police unions, churches, and politicians in the United States were pointing to American crime titles like Crime Does Not Pay as guiding readers to become criminals. These groups should have blamed Langley rather than comic-book publisher Lev Gleason.

There is another historical irony in the government’s use of Commercial Press for Cold War propaganda. Commercial first achieved fame for a comic issued to boost Harry Truman’s 1948 re-election campaign. Later the company was engaged to help several segregationist Dixiecrats. At the same time that Commercial was helping defend racial segregation at home, the State Department engaged the company to win anti-Communist support in nonwhite countries like Korea and Vietnam with its title The Free World Speaks.

The most serious of Hirch’s missteps when it comes to the history of comics occurs with the treatment of psychiatrist Dr. Frederic Wertham. Wertham is a well-known pop cultural boogeyman for his anti-comics advocacy in the fifties, both in his book Seduction of the Innocent and in Senate testimony. I have entered comic book stores that have large posters dedicated to Wertham and the damage he did to the industry. Hirsch recasts Wertham as a more noble character, stressing his dedication to progressive causes like integration as well as his opposition to the racist caricatures of Black people and other nonwhite racial groups that often appeared in comics. But while Wertham was against racial prejudice he had no problem in engaging in homophobic prejudice to smear the comics. He infamously cited Batman and Robin as “a wish dream of two homosexuals living together.” Second, when Wertham testified before the Senate he cited the EC Comics story “The Whipping” as an example of racism in comics. In actuality, “The Whipping” carried an anti-racist message which Wertham either misread or ignored to make his point that all comics were harmful. In fact, many EC stories carried progressive messages and the company even got a recommendation from the Black newspaper The Chicago Defender for “Judgment Day,” a science-fiction allegory decrying segregation.

The treatment of Marvel Comics near the end of the book paints the company’s stories with too broad a brush as supporting the establishment. While it is true that Iron Man was born out of the war against Communism in Vietnam and several Marvel characters fought Communist opponents throughout the sixties, two of the company’s most popular characters stood well outside the establishment. Spider-Man faced opposition from both the press, who considered him a super-powered menace, and the police, who regularly accused him of the crimes he attempted to prevent. Likewise, the Hulk regularly clashed with the army both as the Hulk and in his civilian identity, Bruce Banner, who the hawkish soldiers consider to be a milquetoast egghead. It is no coincidence that these two characters were cited as favorites by student radicals in a 1965 Esquire poll that ranked Spider-Man and the Hulk alongside Bob Dylan and Che Guevara.

Hirsch deserves praise for this exploration of comics history and cultural studies. All comic book fans and anyone interested in Cold War history should read this book. But keep in mind that the author sometimes uses a sledgehammer when a scalpel would have served him better.

[Hank Kennedy is a Detroit area educator and socialist who writes regularly on the connection between comics and politics.]