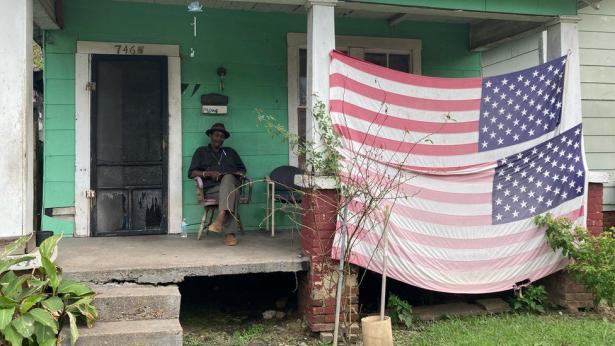 Marshall says he has no choice but to drink what comes out of the tap,

Marshall lives in west Jackson, in the US state of Mississippi - a predominantly black and poor part of the city. He has no choice but to drink the tap water that Jackson residents have been told to avoid. When he turns the tap on - the water runs brown.

He says it's been like this for about eight months and he has no choice but to drink it.

"Yes ma'am. I been drinking it." He smiles when we ask whether it worries him. "I turn 70 later this month," he says.

Marshall doesn't have a car, so he can't get to the sites where water is being handed out by the National Guard. He also doesn't have electricity or gas because of a recent fire in the house next door, which means he can't boil the water to help make it safer.

"Very seldom it's pure. Sometimes it's a little lighter, a little darker. In the bath tub when I first turn it on, it always comes out rust, then it gets lighter. But every time, the rust comes first."

Jackson councilman Aaron Banks has lived in the Mississippi state's capital for most of his life, and now represents a district that is more than 90% Black.

He says he thinks a devastating combination of aging infrastructure and climate change ultimately led to the latest collapse of Jackson's water supply. 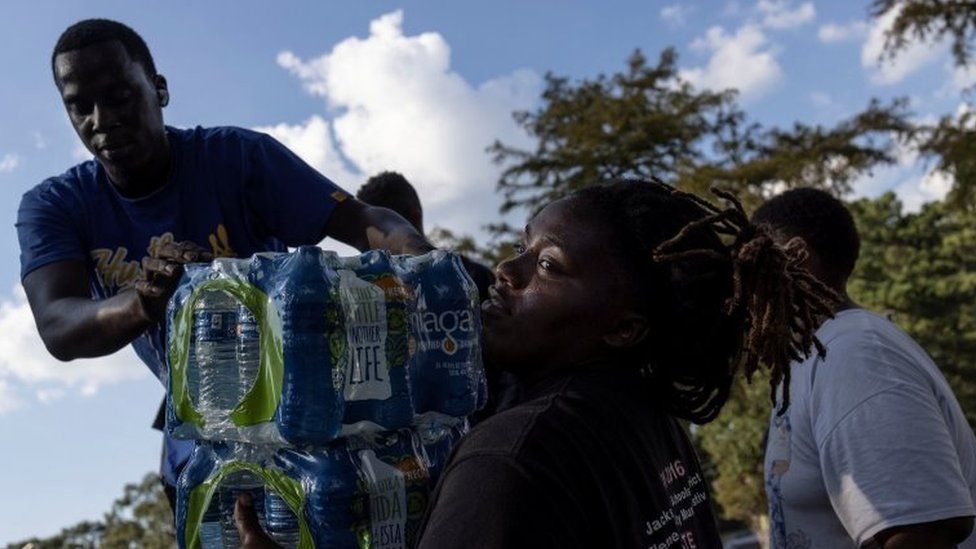 In 2020, when freezing temperatures caused Jackson's water treatment facility to shut down, Mr Banks says his district went without water for nearly six weeks - far longer than the surrounding areas. The town's infrastructure has struggled to keep up ever since.

"We have not gone a month without having a 'boil water' notice or low to no water pressure in the last two years," he says. "Unfortunately, that is something we have gotten used to as American citizens - nobody should be adapting to that type of quality of life."

Time and again, Mr Banks says, those who are forced to adapt have predominately been people of colour. For years, the councilman says he has watched state funding pour into the infrastructure of towns and areas around Jackson - but they've missed the facilities that need it most, including the city's water treatment plant. 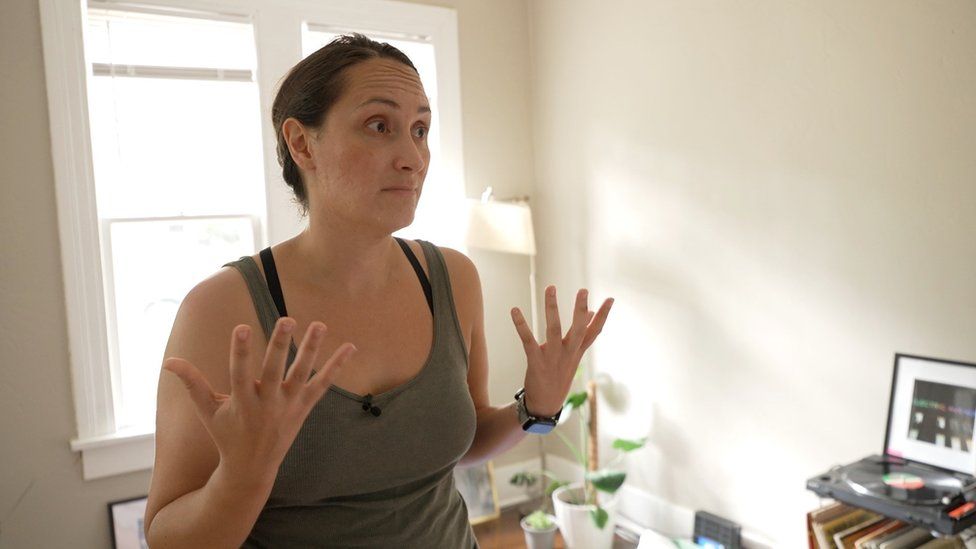 "People's health is secondary to the state," Sarina Larson argues

President Joe Biden's landmark infrastructure bill earmarked money for disadvantaged and underserved communities like Jackson, which in 2020 had a population of 163,000. But the funding is allocated by state legislators who, Mr Banks says, often succumb to politics and prioritise projects for their constituents instead of focusing on fixing systemic issues in Jackson.

"We have a water treatment facility that's obsolete that nobody has thought about for years," says Professor Edmund Merem, an urban planning and environmental studies professor at Jackson State University.

"I think the problem is that the reaction tends to be ad hoc."

But Prof Merem also believes another factor has pulled focus and funding away from the Jackson's crumbling infrastructure - race.

"This is a deep seated, decades-long, in the making kind of situation," says Arielle King, a lawyer and environmental justice advocate.

"I think the history of racial segregation and redlining in this country have deeply contributed to the environmental injustices we see right now."

Redlining began in the 1940s as a government-sanctioned practice of denying mortgages and loans to people of colour because they were deemed "too risky."

The programme lasted more than 40 years, and as a result, Ms King says, low-income, predominately black communities were concentrated in areas with polluting industries like landfills, oil refineries, and wastewater treatment plants.

And those areas, she notes, still exist today.

She points to parts of the country like so-called Cancer Alley as an example. Once the home to Louisiana's sprawling plantations, the area along the Mississippi River is now an industrial highway of more than 150 oil refineries and factories.

For decades, the predominately black residents have suffered from some of the highest rates of cancer in the nation because of pollution.

Ms King says the legacy of this kind of environmental racism, coupled with decades of underinvestment in low-income areas is playing out in Jackson.

"They can say that there are different factors that lead to flooding, but people wouldn't be subject to areas that are susceptible to flooding without redlining in the first place," Ms King says.

"So again, it does kind of come back to race, and environmental racism, unfortunately, every time."

Sarina Larson is studying to be a lawyer and lives a few blocks from Marshall. She moved from Sacramento and wants to be a public defence lawyer. She too blames redlining for the issues the area has been having.

In her kitchen, there are bowls of varying sizes all over the floor. She catches rain water in them and then uses a water filter.

"The pipes have lead in them in Jackson and so I would never drink a glass of water," she says. "I don't brush my teeth with the tap water".

"A water crisis like this doesn't become an issue until it affects people of a higher class. It has been ongoing and Jackson has been an example of that. People's health is secondary to the state." 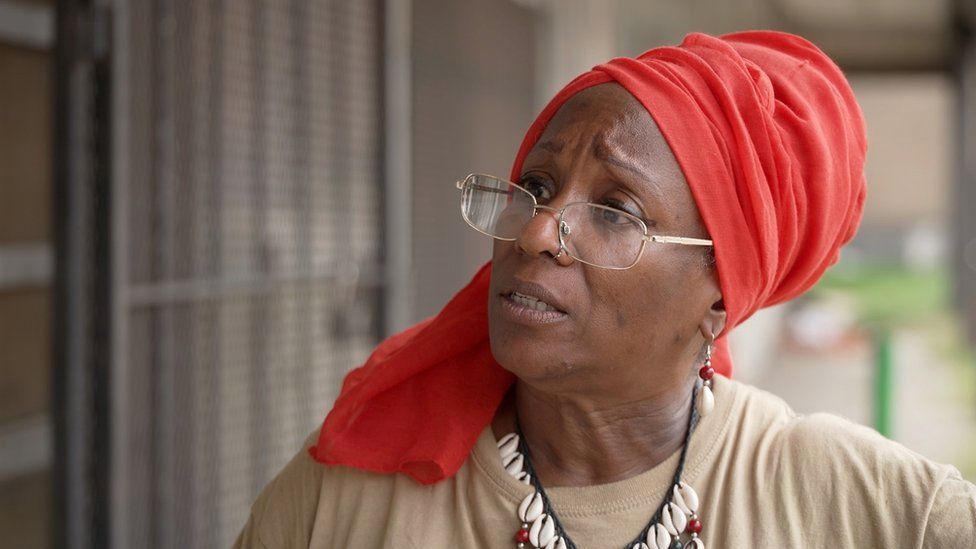 We met Imani Olugbala-Aziz at a local community centre where she and others from the volunteer group Cooperation Jackson were handing out bottled water. It took less than an hour for them to run out. She tells us she barely has water at her own home.

"It's a crisis of views and values and there's a lot of environmental racism going on. We are sending our money to the government to get what needs to be done, done. And they're not doing it.

"We're not asking for mansions, we just want to live and have the normal stuff, running water, clean water," Ms Olugbala-Aziz says.

She says the local area has a high homeless rate and local shops have closed which makes it hard for people to buy water.

"We've been on the boiled water alert for about a month. It's not drinkable, so what do we do? How do we feed our children, how do we cook and eat?"

"This is not something that has just happening. This is slow rolling and it has gotten to the point of untenable. We're struggling here."

Where water is so dirty 'we shower with mouths shut'

Chi Chi Izundu is a senior Digital Reporter with BBC News. Chi Chi started her journalistic career at the age of 17 as a regular columnist for Girl About Town magazine. A few years later she joined BBC London 94.9 as a researcher, before graduating to become a producer working on the Saturday Sport show, the Jon Gaunt show, Drive, Vanessa Feltz and other programmes. She then left to complete a Postgraduate Diploma in Broadcast Journalism at City University. Afterwards, she worked at Virgin Radio on their entertainment news team. She also freelanced at Sky News and worked at ITN before returning to the BBC as a reporter for BBC Radio 1Xtra. She also presented their two hour news magazine show, TXU and was the entertainment presenter on the Trevor Nelson breakfast show. She then joined the BBC Radio 1’s Newsbeat entertainment news team, breaking a number of big stories, including doing a week long expose on the ticketing industry which contributed to Newsbeat winning a Sony Gold award. Chi then moved to the Victoria Derbyshire show, with a brief to bring “hard entertainment news stories to the programme”. As well as breaking a story on the controversial police risk assessment form 696, Chi also exposed the connection between Grime music and gang violence in the UK, how Robbie Williams management were charging fans higher prices for tickets on resale sites, despite signing a public notice against them historically. Chi has also worked for the BBC’s Newsgathering team, performing as a Correspondent on a variety of stories for their flagship news programmes, the Six and Ten o’clock evening news, including travelling to Jamaica to cover the Windrush scandal, how Xanax was being used by children as young as 11, plus the Mercury prize winners.

Mohamed Madi is a senior journalist and filmmaker for BBC News. He has worked across TV, radio and online in over 30 different countries including Libya, Ukraine and Venezuela. His work has shed light on abuse of LGBTQ refugees in Dutch refugee camps, the final hours of the Karzai administration, and the aftermath of the 2019 Langford family massacre in northern Mexico. His most recent documentary, From Kurdistan with Sorrow, explored the impact of the 2021 English Channel migrant disaster. He was also a part of the BBC’s award-winning coverage of the Arab Spring. Mohamed has appeared as a panelist on JST masterclasses and also works with the Media Trust.

Chelsea Bailey is a journalist and video producer for BBC News who specializes in producing nuanced, character-led videos that explore race, health and inequity in today’s polarized political and social climate.