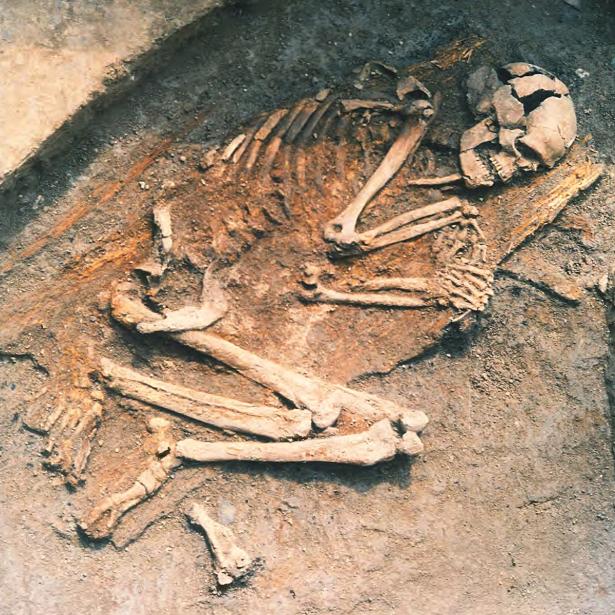 Researchers sampled DNA from individuals including this man, buried about 8000 years ago in Turkey.,Jacob Roodenberg

Few places have shaped Eurasian history as much as the ancient Near East. Agriculture and some of the world’s first civilizations were born there, and the region was home to ancient Greeks, Troy, and large swaths of the Roman Empire. “It’s absolutely central, and a lot of us work on it for precisely that reason,” says German Archaeological Institute archaeologist Svend Hansen. “It’s always been a bridge of cultures and a key driver of innovation and change.”

But one of the most powerful tools for unraveling the past, ancient DNA, has had little to say about this crucible of history and culture, in part because DNA degrades quickly in hot climates.

Now, in three papers in this issue, researchers present DNA from more than 700 individuals who lived and died in the region over more than 10,000 years. Taken together, the studies survey the history of the Near East through a genetic lens, exploring the ancestry of the people who first domesticated plants and animals, settled down into villages, spread the precursors of modern languages, and peopled Homer’s epics.

The massive data set includes DNA from burials stretching from Croatia to modern-day Iran, in a region the authors call the Southern Arc. “The sample size is phenomenal, and fascinating,” says Wolfgang Haak, a geneticist at the Max Planck Institute for Evolutionary Anthropology who was not part of the team. “The beauty of this is it’s bringing it all together in a bigger narrative.”

That narrative is no simple tale. The geneticists, led by David Reich and Iosif Lazaridis of Harvard University, worked with archaeologists and linguists, gathering thousands of skeletal samples and extracting and analyzing DNA, mostly from the dense petrous bone of the ear, over nearly 4 years. They applied better extraction methods and compared new samples with existing data, allowing them to identify even short bits of DNA.

Their genetic story starts with the early days of farming, a period known as the Neolithic. Farming began in Anatolia in what is present-day Turkey. But the DNA shows that the people who experimented with planting wheat and domesticating sheep and goats starting about 10,000 years ago weren’t simply descendants of earlier hunter-gatherers living in the area. Dozens of newly sequenced genomes suggest Anatolia absorbed at least two separate migrations from about 10,000 to 6500 years ago. One came from today’s Iraq and Syria and the other from the Eastern Mediterranean coast. In Anatolia they mixed with each other and with the descendants of earlier hunter-gatherers. By about 6500 years ago, the populations had coalesced into a distinct genetic signature.

Another genetic contribution came from the east about 6500 years ago, as hunter-gatherers from the Caucasus entered the region. Then about 5000 years ago, a fourth group—nomads from the steppes north of the Black Sea, known as the Yamnaya—arrived, adding to the genetic picture but not fundamentally redrawing it. “The people of the Southern Arc are mostly coming from Levantine, Anatolian, and Caucasus components,” Lazaridis says. “The Yamnaya are like a layer of sauce, added after 3000 B.C.E.” 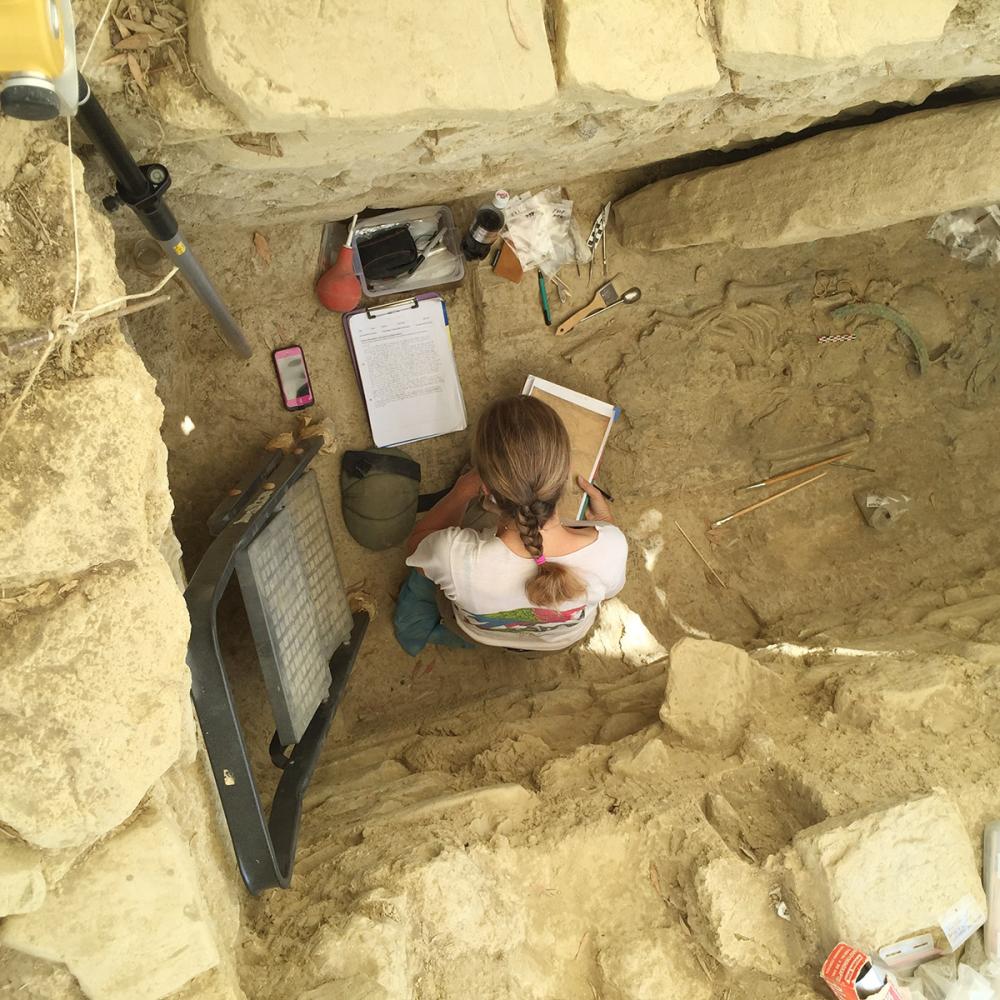 This scenario supports existing evidence that agriculture arose in a network of people interacting and migrating in this region, others say. “This fits really well with archaeological data,” says Barbara Horejs, scientific director of the Austrian Archaeological Institute, who was not part of the team.

But other scholars question the team’s conclusion about the origins of a different cultural shift, the spread of Indo-European languages. Nearly every language spoken in Europe today stems from a common root, shared with Indian languages. Researchers have for years traced it to the Bronze Age Yamnaya, who rode both east and west from the steppes. But the authors of the new papers argue the Black Sea steppe wasn’t the birthplace of Indo-European, but rather a stop along a journey that began earlier and farther to the south, perhaps around modern-day Armenia.

Because of similarities between Indo-European and Anatolian languages such as ancient Hittite, linguists had guessed the Yamnaya had left both genes and language in Anatolia, as well as Europe. But the new analysis finds no Yamnaya ancestry among ancient Anatolians. The team suggests they and the Yamnaya instead share common ancestors in a hunter-gatherer population in the highlands east of Anatolia, including the Caucasus Mountains. That area, they argue, is the most likely place for people to have spoken an Anatolian-Indo-European root language, perhaps between 5000 and 7000 years ago. “That Caucasus component is a unifying type of ancestry we find in all places where ancient Indo-European languages are spoken,” says Lazaridis, who is first author on all three papers.

However, Guus Kroonen, a linguist at Leiden University, says this contradicts linguistic data. The early people of the Caucasus would have been familiar with farming, he says, but the deepest layers of Indo-European have just one word for grain and no words for legumes or the plow. Those speakers “weren’t very familiar with agriculture,” he says. “The linguistic evidence and the genetic evidence don’t seem to match.”

Lazaridis says it’s possible the root tongue “was originally a hunter-gatherer language,” and so lacked terms for farming. The team agrees more evidence of “Proto-Indo-Anatolians” is needed, but says the Caucasus is a promising place to look.

Throughout, the papers address some critiques of previous ancient DNA work. Some archaeologists have complained that earlier research attributed almost everything—status, identity, power shifts—to pulses of migration recorded in DNA. But the new papers acknowledge, for example, that some migrations into Anatolia may not have been relevant or even perceptible to those living at the time. “That’s a response to criticisms coming from the archaeological literature,” says Hartwick College archaeologist emeritus David Anthony, who is not a co-author but has worked with the team. “It’s really healthy.”

In another example, Yamnaya were buried in elite tombs after they moved into the region north of Greece, suggesting a link between ancestry and social status. But during the later Mycenaean period in Greece—the time Homer mythologized—the new data suggest Yamnaya descendants had little impact on Greek social structure.

The beauty of this is it’s bringing it all together in a bigger narrative.

Evidence comes in part from the spectacular Mycenaean burial of the Griffin Warrior, a man who died in 1450 B.C.E. near Pylos, Greece. He carried no traces of steppe ancestry, though dozens of both elite and humbler graves in Greece did. University of Cincinnati archaeologist Shari Stocker, who helped excavate the tomb in 2015 and collaborated on the new studies, says the lack of correlation between social status and steppe ancestry is no surprise—and a welcome dose of nuance from geneticists.

The papers also acknowledge the nuances of identity in later periods, for example in Imperial Rome. Previous genetic studies had shown that as the empire coalesced, the ancestry of people in and around the city of Rome shifted, with most having roots not in Europe, but farther east.

After obtaining dozens of additional Roman-era genomes from the region, the team zeroed in on the source of those newcomers: Anatolia. But the researchers agree that people with “Anatolian” DNA moving to the Italian peninsula likely saw themselves as citizens or slaves of Rome, rather than as part of a distinct “Anatolian” ethnic group. Contemporary chroniclers remarked on the new faces in Rome—and referred to many of them as “Greeks,” perhaps because the eastern peoples had spoken Greek for centuries, Lazaridis says.

Some archaeologists still think the papers claim too much influence for ancestry. “DNA cannot tell us anything about how people shape their life worlds, what their social status was,” says archaeologist Joseph Maran of Heidelberg University. He says terms like “Yamnaya ancestry” suggest the Yamnaya spread by moving directly from place to place, rather than through a complex mingling of their descendants with local populations over centuries or more. “Equating history with ‘mobility’ and ‘migrations’ is … old-fashioned.”

And although the studies are a big step forward, in covering 10,000 years with 700 samples, they leave plenty of questions unanswered, with large stretches of time and space represented by a handful of samples.

All the same, several archaeologists including Horejs think this injection of DNA data will shape research going forward. “It’s our task now, and obligation as archaeologists, to use this new data to rethink archaeological models,” she says.

I am an award-winning journalist with more than 20 years of experience reporting from five continents. I cover science, travel, history, politics, cycling and more.

I have written for a wide variety of publications, from Architect and Bicycling to National Geographic, The New York Times, Rouleur, and Wired. I am a contributing correspondent for Science and a contributing editor at Archaeology.

I live in Berlin, Germany.

Make an Impact With Your Subscription

With a readership of more than one million, Science, published by AAAS, is the world’s leading outlet for scientific news and cutting-edge research. Every week, you will receive invaluable content made for STEM enthusiasts who are shaping the future.

From exploring ripples in spacetime to quantifying the impact of emissions on our climate, Science puts you at the forefront of what’s new in STEM as we collectively build what’s next.

Science is more than just a magazine. Subscribers, like you, make up a community that’s dedicated to driving scientific progress that benefits everyone. When you join AAAS, you’re directly helping us promote diversity in STEM, support educational opportunities for underserved communities, engage policymakers on issues like climate change, and much more.

Join AAAS today to unlock the benefits of membership, including:

Digital and print subscriptions to Science

An exclusive gift for new members

Breaking news and much more!