Peace Talks Essential As War Rages On in Ukraine

For those who say negotiations are impossible, we have only to look at the talks that took place during the first month after the Russian invasion, when Russia and Ukraine tentatively agreed to a fifteen-point peace plan in talks mediated by Turkey. 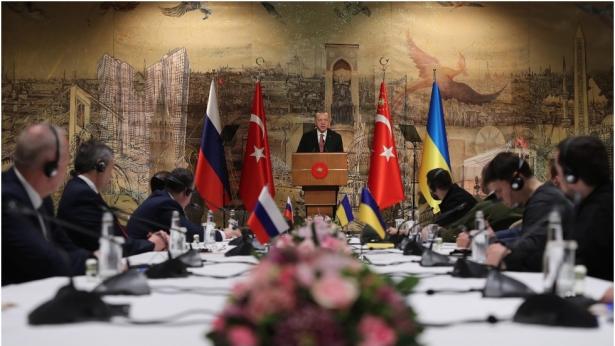 Six months ago, Russia invaded Ukraine. The United States, NATO and the European Union (EU) wrapped themselves in the Ukrainian flag, shelled out billions for arms shipments, and imposed draconian sanctions intended to severely punish Russia for its aggression.

Since then, the people of Ukraine have been paying a price for this war that few of their supporters in the West can possibly imagine. Wars do not follow scripts, and Russia, Ukraine, the United States, NATO and the European Union have all encountered unexpected setbacks.

Western sanctions have had mixed results, inflicting severe economic damage on Europe as well as on Russia, while the invasion and the West’s response to it have combined to trigger a food crisis across the Global South. As winter approaches, the prospect of another six months of war and sanctions threatens to plunge Europe into a serious energy crisis and poorer countries into famine. So it is in the interest of all involved to urgently reassess the possibilities of ending this protracted conflict.

For those who say negotiations are impossible, we have only to look at the talks that took place during the first month after the Russian invasion, when Russia and Ukraine tentatively agreed to a fifteen-point peace plan in talks mediated by Turkey. Details still had to be worked out, but the framework and the political will were there.

Russia was ready to withdraw from all of Ukraine, except for Crimea and the self-declared republics in Donbas. Ukraine was ready to renounce future membership in NATO and adopt a position of neutrality between Russia and NATO.

The agreed framework provided for political transitions in Crimea and Donbas that both sides would accept and recognize, based on self-determination for the people of those regions. The future security of Ukraine was to be guaranteed by a group of other countries, but Ukraine would not host foreign military bases on its territory.

On March 27, President Zelenskyy told a national TV audience, “Our goal is obvious—peace and the restoration of normal life in our native state as soon as possible.” He laid out his “red lines” for the negotiations on TV to reassure his people he would not concede too much, and he promised them a referendum on the neutrality agreement before it would take effect.

Such early success for a peace initiative was no surprise to conflict resolution specialists. The best chance for a negotiated peace settlement is generally during the first months of a war. Each month that a war rages on offers reduced chances for peace, as each side highlights the atrocities of the other, hostility becomes entrenched and positions harden.

The abandonment of that early peace initiative stands as one of the great tragedies of this conflict, and the full scale of that tragedy will only become clear over time as the war rages on and its dreadful consequences accumulate.

Ukrainian and Turkish sources have revealed that the U.K. and U.S. governments played decisive roles in torpedoing those early prospects for peace. During U.K. Prime Minister Boris Johnson’s “surprise visit” to Kyiv on April 9th, he reportedly told Prime Minister Zelenskyy that the U.K. was “in it for the long run,” that it would not be party to any agreement between Russia and Ukraine, and that the “collective West” saw a chance to “press” Russia and was determined to make the most of it.

The same message was reiterated by U.S. Defense Secretary Austin, who followed Johnson to Kyiv on April 25th and made it clear that the U.S. and NATO were no longer just trying to help Ukraine defend itself but were now committed to using the war to “weaken” Russia. Turkish diplomats told retired British diplomat Craig Murray that these messages from the U.S. and U.K. killed their otherwise promising efforts to mediate a ceasefire and a diplomatic resolution.

In response to the invasion, much of the public in Western countries accepted the moral imperative of supporting Ukraine as a victim of Russian aggression. But the decision by the U.S. and British governments to kill peace talks and prolong the war, with all the horror, pain and misery that entails for the people of Ukraine, has neither been explained to the public, nor endorsed by a consensus of NATO countries. Johnson claimed to be speaking for the “collective West,” but in May, the leaders of France, Germany and Italy all made public statements that contradicted his claim.

Addressing the European Parliament on May 9, French President Emmanuel Macron declared, “We are not at war with Russia,” and that Europe’s duty was “to stand with Ukraine to achieve the cease-fire, then build peace.”

Meeting with President Biden at the White House on May 10, Italian Prime Minister Mario Draghi told reporters, “People… want to think about the possibility of bringing a cease-fire and starting again some credible negotiations. That’s the situation right now. I think that we have to think deeply about how to address this.”

After speaking by phone with President Putin on May 13, German Chancellor Olaf Scholz tweeted that he told Putin, “There must be a cease-fire in Ukraine as quickly as possible.”

But American and British officials continued to pour cold water on talk of renewed peace negotiations. The policy shift in April appears to have involved a commitment by Zelenskyy that Ukraine, like the U.K. and U.S., was “in it for the long run” and would fight on, possibly for many years, in exchange for the promise of tens of billions of dollars worth of weapons shipments, military training, satellite intelligence and Western covert operations.

As the implications of this fateful agreement became clearer, dissent began to emerge, even within the U.S. business and media establishment. On May 19, the very day that Congress appropriated $40 billion for Ukraine, including $19 billion for new weapons shipments, with not a single dissenting Democratic vote, The New York Times editorial board penned a lead editorial titled, “The war in Ukraine is getting complicated, and America isn’t ready.”

The Times asked serious unanswered questions about U.S. goals in Ukraine, and tried to reel back unrealistic expectations built up by three months of one-sided Western propaganda, not least from its own pages. The board acknowledged, “A decisive military victory for Ukraine over Russia, in which Ukraine regains all the territory Russia has seized since 2014, is not a realistic goal.… Unrealistic expectations could draw [the United States and NATO] ever deeper into a costly, drawn-out war.”

More recently, warhawk Henry Kissinger, of all people, publicly questioned the entire U.S. policy of reviving its Cold War with Russia and China and the absence of a clear purpose or endgame short of World War III. “We are at the edge of war with Russia and China on issues which we partly created, without any concept of how this is going to end or what it’s supposed to lead to,” Kissinger told The Wall Street Journal.

U.S. leaders have inflated the danger that Russia poses to its neighbors and the West, deliberately treating it as an enemy with whom diplomacy or cooperation would be futile, rather than as a neighbor raising understandable defensive concerns over NATO expansion and its gradual encirclement by U.S. and allied military forces.

Far from aiming to deter Russia from dangerous or destabilizing actions, successive administrations of both parties have sought every means available to “overextend and unbalance” Russia, all the while misleading the American public into supporting an ever-escalating and unthinkably dangerous conflict between our two countries, which together possess more than 90% of the world’s nuclear weapons.

After six months of a U.S. and NATO proxy war with Russia in Ukraine, we are at a crossroads. Further escalation should be unthinkable, but so should a long war of endless crushing artillery barrages and brutal urban and trench warfare that slowly and agonizingly destroys Ukraine, killing hundreds of Ukrainians with each day that passes.

The only realistic alternative to this endless slaughter is a return to peace talks to bring the fighting to an end, find reasonable political solutions to Ukraine’s political divisions, and seek a peaceful framework for the underlying geopolitical competition between the United States, Russia and China.

Campaigns to demonize, threaten and pressure our enemies can only serve to cement hostility and set the stage for war. People of good will can bridge even the most entrenched divisions and overcome existential dangers, as long as they are willing to talk - and listen - to their adversaries.

Medea Benjamin is the cofounder of CODEPINK for Peace, and the author of several books, including Inside Iran: The Real History and Politics of the Islamic Republic of Iran.

Nicolas J. S. Davies is an independent journalist, a researcher with CODEPINK and the author of Blood on Our Hands: The American Invasion and Destruction of Iraq.