The new British monarch has not earned such a title, say climate activists from colonized nations 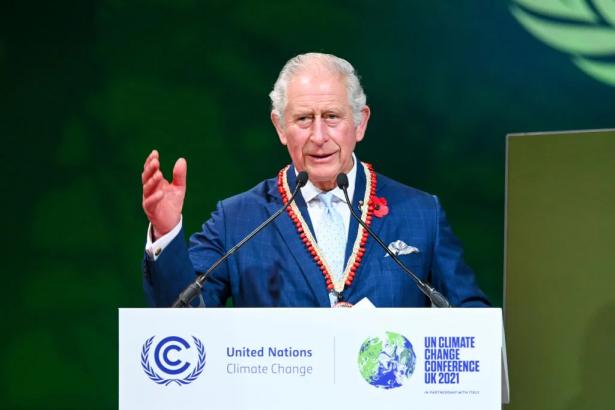 “The world has a climate king,” Politico’s E&E News declared on Friday in an article outlining Charles’s environmental bona fides. Vox called Charles the “climate change king” in a worth-reading piece analyzing how the new monarch might rule. VOA called Charles "the green king" in a similar article, as did… Women’s Wear Daily, for some reason. And in an interview with The Guardian, British environmentalist Tony Juniper called Charles III "possibly the most significant environmental figure of all time."

These articles of praise, however, are missing something: the opinions of climate activists from nations colonized by the British, which happen to be the nations most harmed by climate change. (Of the 10 most climate-vulnerable nations, eight are former British colonies, according to the Global Climate Risk Index).

So in today’s issue, we’ll hear from climate justice advocates with ancestral ties to current and former British colonies on whether King Charles should be considered a “climate king”—and whether it’s possible for a “climate king” to exist at all.

We’ll also discuss the inseparable link between British colonialism and climate change, and the tragic irony of Charles’ ascension coinciding with climate devastation in Pakistan, a former British colony.

Let’s make one thing clear from the beginning: No one is denying Charles’s concern for the climate. The former Prince of Wales has been outspoken about biodiversity loss and global warming for decades. (Check out this Washington Post piece for a run-down of his resume).

Charles’ advocacy has also included raising awareness in vulnerable British colonies in the Caribbean, a feat for which Tamara Toles O'Laughlin, president of the Environmental Grantmakers Association, gives him props.

“[Charles] has successfully made issues of conservation, adaptation and mitigation in the U.K. and it’s colonialist territories a focal point,” she said. “This includes investing his time, his ceremonial power and convening capacity to draw attention to environment.”

But Charles has never acknowledged the monarchy’s full responsibility for the climate crisis. Asked by the BBC last year if the U.K. was doing enough to combat climate change, he replied:  "I couldn't possibly comment." And while Charles has acknowledged the general injustice of the monarchy’s colonial legacy, he has not connected that legacy to growing climate injustice around the world.

Climate justice activists from colonized nations say this connection is important, because the very institution that gives Charles a powerful platform to speak on climate change is responsible for creating global crisis conditions in the first place. To truly be considered a “climate king,” they say, Charles would have to not only acknowledge the climate harm done by the monarchy, but take steps to repair it.

“Most of the environmental initiatives of King Charles are small symbolic actions and pretty words, nowhere near the scale of struggle and sacrifice that the world needs at the present moment to save us from ecological catastrophe,” said Basav Sen, climate policy project director at the Institute for Policy Studies. “Regardless of what King Charles may have done for the environment in his personal capacity, he is an inheritor of the legacy of the British monarchy and the British empire.”

And if he doesn’t reckon with that legacy, at the very least, we should.

The inseparability of colonization and climate crisis

The British monarchy’s climate legacy goes far beyond its own historical carbon emissions, explains Sen, who was born and raised in India and whose parents are from Bangladesh:

Not only was the British empire an oppressive colonial entity, it was also quite literally the one political power that started the fossil-fueled Industrial Revolution, the driving force behind climate change.

The fact that the Industrial Revolution originated in Britain is not merely an accident of circumstances, or because of some uniquely British inventiveness. It was, above all, attributable to the colonial plunder of other parts of the world, which provided much of the capital investment for the large-scale buildout of manufacturing facilities and machinery.

In other words, the only reason the monarchy had the money to kick off the Industrial Revolution was because it took that money from other countries through colonization. And while that revolution continued, and carbon started pouring into the atmosphere, the monarchy grew its wealth, while the countries it colonized were left destabilized.

The destabilization from colonization is a big reason why today, so many current and former British colonies do not have the resources for mitigating, adapting to, or recovering from the effects of climate change, advocates say. The present-day apocalyptic flooding in Pakistan is a prime example, said Keya Chatterjee, executive director of U.S. Climate Action Network:

When people think of what the British took from the Indian subcontinent, the most visible thing in people's minds is the gems. Yes, they took gems—but they took so much more. It took a way of living. It took a sense of harmony.

What they brought was almost constant war for multiple generations. And that destabilized the entire region to the point where now, when people are suffering, there aren't helicopters to go save people. There aren’t roads to drive ambulances on. The basic infrastructure isn't there.

Colonization, Sen said, is “also why many of these counties have to borrow from institutions like the International Monetary Fund and World Bank, and get stuck on a treadmill of debt.” Pakistan’s debt currently exceeds $250 billion.

Of course, there are multiple reasons for destabilization and poverty in any country, and Chatterjee was quick to acknowledge that British colonization cannot be completely blamed for Pakistan’s vulnerability. But colonization “is an obvious piece that's well-documented,” she said.

Indeed, the Intergovernmental Panel on Climate Change has explicitly named colonialism as a past and present driver of climate injustice. In its last report, the international consortium of the world’s top climate scientists said that high vulnerability is driven by “historical and ongoing patterns of inequity such as colonialism, especially for many Indigenous Peoples and local communities.”

In addition, research published in the journal PNAS in 2020 found that colonization “disrupted livelihoods, reshaped land- and seascapes, threatened intergenerational ecological knowledge transfer, and led to increased inequality and climate vulnerability” on islands in the Caribbean and southwestern Indian Ocean.

While British colonization has left a legacy of massive climate vulnerability for nations like Pakistan, it has left the U.K.—and Charles—a legacy of massive wealth with which to protect itself. Forbes estimates the royal family holds $28 billion in assets, although no one truly knows how much they have.

Much of that wealth has been on full display this month, as the world’s attention has been fixed on the monarchy. This doesn’t sit right with Sen. “While Pakistan is drowning, much of the world media is fixated on the new monarch of its former colonizer instead,” he said. “This is historical amnesia, and fails to make the connections between colonialism, poverty, and climate change.”

Pakistan has racked up $30 billion in damages from this year’s flooding, prompting UN Secretary-General Antonio Guterres to call for “massive financial support” from the international community. The U.K. responded to that call with $1.7 million in aid.

To Chatterjee, whose parents were displaced by the partition of India, these displays of wealth paired with the paltry aid feel like a slap in the face. “So much of Britain’s wealth was built stealing stuff from the Indian subcontinent, and now that stolen stuff is on display on TV every day, just as Pakistan is one third under water,” she said. “When I see that, I think, ‘They need to give that stuff back.”

Indeed, “giving stuff back” is essentially what climate activists from colonized nations say is necessary if Charles truly wants to be considered a “climate king.”

“The most dramatic and impactful action he could take now would be to call for forgiveness of colonies debt, declare rights of managed retreat for former colonies fleeing the climate crisis into the U.K. without means testing or diplomatic isolation, and dissolution of territorial subjugation and the empire—you know, climate reparations,” Toles O’Laughlin said. “Or else it’s all an illusion.”

Chatterjee also said Charles must support a U.N. agreement for loss and damages—that is, a process for establishing responsibility and compensation for the unavoidable, irreversible harm that rich, high-polluting countries have caused poor, low-polluting ones.

The laughable idea of a “climate king”

It’s exceedingly unlikely that King Charles would ever take the steps climate justice activists deem necessary to be considered a “climate king.” Comb through his speeches on what must be done to solve climate change, and you’ll see an obsession with harnessing markets and capital. You’ll see little on the subject of accountability—and even less on the subject of repairing harm done by the British Empire.

There’s also the fact that the King is traditionally a non-political figure. The main purpose of his position is to defend and uphold the monarchy. He’s now expected to bite his tongue far more than he did as Prince. If he were ever going to criticize the monarchy—and, on top of that, call for its partial dissolution—the time has probably passed.

But the biggest indicator that Charles will never earn the title of “climate king” is the nature of monarchy itself. The fact is, kings are not in the business of giving power back to the people they rule over. The business of kings amounts to hoarding power; to hoarding wealth; and to believing that you know what is best for the poor. Monarchy itself is antithetical to climate justice, which calls for giving power back to the people most harmed by the climate crisis.

Anthony Rogers-Wright, a Sierra Leonean and environmental justice director at New York Lawyers for the Public Interest, puts it this way:

The idea of a ‘climate king’ reinforces the idea that only people with immense power can create change. And that’s just false. Greta Thunberg was just a teenager, but she had more impact on the global climate discussion than King Charles ever had. People have to know they have that power too, and that this movement has to be grassroots, and bottom-up. So I think it's harmful, actually, to continue this narrative. Not only wealthy, rich white men can get us out of this crisis.

Heated A newsletter for people who are pissed off about the climate crisis.