A Feminist Revolution in Iran?

What the current Iranian anti-Islamist national uprising, the Iranian feminist Revolution of 2022, has thus far demonstrated is that the power of the reactionary clergy over the consciousness of Iranian society with its dark spell after centuries has finally been broken en masse – and for the good. Whatever the outcome of current events – whether the regime falls in short order or over a protracted period – there is no going back. 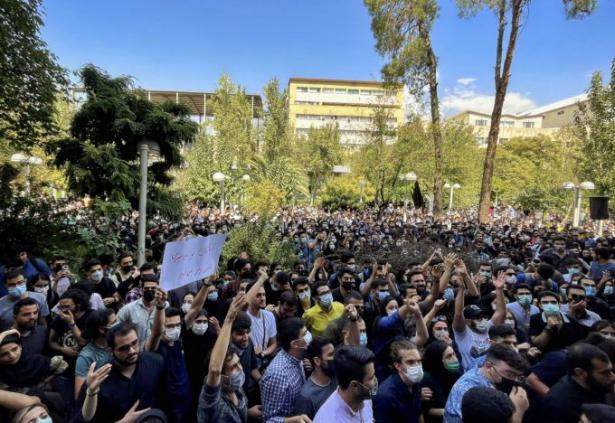 Students of Amir Kabir university protest against Hijab and the Islamic Republic.,Public Domain

‘We have given the power of the world and its leadership over to women! O you women of the world, be you responsible with it, if you be just and fair!’ – First Gate of the Fifteenth Unity of the Bayān

As several historical narratives have detailed,[1] during the summer of 1848 as revolutions were raging across Europe, and closely contemporaneous with the publication of the Communist Manifesto by Marx and Engels; an ancestor of mine and iconclastic revolutionary Bābī leader and Iranian Shiʿite woman hailed by the Bāb as the ‘return’of Fāṭima (i.e. the prophet Muḥammad’s daughter), and known to posterity as Ṭāhirih Qurrat’ul-ʿAyn (the Pure Solace of the Eyes) (d. 1852), appeared publicly unveiled atop a make-shift dā’is in the hamlet of Badasht northern Iran, Semnan province, where Bābī leaders and laity had gathered at the time on their leader’s behest, i.e. the Bāb (himself incarcerated at the time in Iranian Azerbaijān), in order to determine the fate of their movement. Creating an uproar that resonates to this very day by scandalizing the orthodox religious establishment for appearing publicly unveiled, there Qurrat’ul-ʿAyn is apparently credited for proclaiming the abrogation of the Islamic dispensation altogether with its sharīʿa, declaring her own divinity in the process, while promulgating a new scripture on behalf of the Bāb superceding the Qurān known as the Bayān (exposition). A few accounts have dramatized words uttered by her to the effect that, ‘I am the word which the Qāʾim [i.e. the Islamic messiah] has uttered putting the kings and rulers of the earth to flight!’[2]

Four years later in the late summer of 1852, as the absolutist Qājār monarchy and its reactionary clerical allies had struggled on the brink of collapse to put down Bābī uprisings throughout Iran with the heresy it represented to them; and following a four year incarceration by government forces as a vocal religio-political dissident; on the back of a failed Bābī assassination attempt on the life of the Qājār monarch, Nāṣiruddīn Shāh (d. 1896); by royal edict Qurrat’ul-ʿAyn was strangled to death with her body buried somewhere in the royal gardens (bāgh-i-ilkhānī) of Tehran.[3] Although neither Bahāism nor a modern Iranian feminist movement were to emerge for a few more decades yet from 1852, both movements have subsequently claimed her as theirs, and often for contradictory reasons. Twentieth century Iranian feminists and activists such as Sadīqa Dawlatābādī (d. 1961)[4] or the modernist poet and iconoclast Forough Farrokhzād (d. 1967)[5] were inspired by her example. There is even speculation that the Islamo-Marxist ideologue of the Islamic Revolution himself, ʿAlī Sharīʿatī (d. 1977),[6] was secretly a Bābī – his uncompromising anti-clericalism being implicit evidence to that end, not to mention that his late wife never donned the ḥijāb until forced to by the Khomeinist state. Sharīʿatī’s series of Hosseiniyah-Ershād lectures bound as a single volume, entitled ‘Fāṭima is Fāṭima’ (fāṭima, fāṭima hast),[7] also seems to be a bow to Qurrat’ul-ʿAyn rather than the Fāṭima of orthodox Shiʿite piety.

That said, while as yet unacknowledged, the historical shadow of Ṭāhirih Qurrat’ul-ʿAyn, the ‘Remover of the Veil’, hangs long over current events unfolding in Iran, with Mahsa Amini (who was murdered by the security forces of the Morality Police of the Islamic Republic on the 13th of September 2022 which triggered current events) becoming a sort of archetypal Qurrat’ul-ʿAyn revisited, since Qurrat’ul-ʿAyn was the first modern Iranian woman to have challenged the Islamic patriarchy at its root, and the ḥijāb in particular, in the way it is once more being decisively challenged and defied, this time by all sectors of Iranian women rather than just a single person. The slogan of this uprising, ‘Woman, life, freedom’ (zan, zendegī, āzādī), also epitomizes what Qurrat’ul-ʿAyn and all Iranian women who came after her have stood for, struggled and fought for. In a sense, given its conspicuous anti-clericalism, current events are also a reprise of the Iranian Constitutional Revolution (1906-1909) itself from where it left off: a movement initially spearheaded by late nineteenth century and early turn of the twentieth century Iranian Azalī Bābīs that was originally designed to curb both the unchecked power of the absolutist monarchy as well as the reactionary Shiʿite clergy behind it.[8] Given Tsarist Russian intervention in an anti-Constitutional coup d’etat in 1909 on the side of the Qājārs and some of their clerifical allies, such as Khomeini’s bigotted anti-Bābī hero Shaykh Faḍlullāh Nūrī (d. 1909) – an arch-reactionary figure of the period which the Islamic Republic has gone out of its way over the years to celebrate and lionize – this movement slowly unravelled over the next decade before being twilighted altogether with the rise of the Pahlavi shahs and their uber-modernist, statist and petro-dollar dictatorship during the 1920s. But its memory and thrust lived on because it re-appeared in a new guise during the Anglo-Soviet occupation of Iran (1941-1946) and with the two shortlived premierships of Mohammad Mossadegh (d. 1967)[9] in the early 1950s.

While contemporary histories of Iran punctuate its history with Ayatollah Khomeini (d. 1989), his Islamic Revolution of 1979 and the veiling of women, the past forty-three years have proven that 1979 and the Islamic Republic were in fact a historical aberration and so not a progressive stream connecting it with the Constitutional Revolution and its aims. So perhaps contemporary events, especially if the mullahs’ regime were to be taken down, are a historical self-correcting mechanism, as it were. Indeed events have proven that Khomeini and his Islamic Revolution were in fact a counter-Revolution vis-à-vis the Constitutional Revolution: a counter-Revolution that has critically stymied and crippled Iranian society for the past four decades on all fronts, and one that merely replaced the absolutism of the former kings with that of the mullahs (what else is the system of the Guardianship Jurisprudent and Supreme Leader other than an absolute monarch with a turban); this, since it has been the mullahs who always bolstered the worst excesses of entrenched power and its patriarchy whether under the Safavids or the Qājārs and then the Islamic Republic, i.e. the ‘black Shiʿism’ which ʿAlī Sharīʿatī had vociferously criticized in his books and lectures, as opposed to the people-powered ‘red Shiʿism’ that arguably was the Shiʿism once briefly represented in Iran by the Azalī Bābīs[10] with their revolutionary aspirations to transform Iranian society from the authoritarianism of the royal court as well as, and especially, the patriarchal power structures reinforced by the religious hierarchy of the seminary with its unchecked hold and power over the consciousness of Iranian society.

What the current Iranian anti-Islamist national uprising, the Iranian feminist Revolution of 2022, has thus far demonstrated is that the power of the reactionary clergy over the consciousness of Iranian society with its dark spell after centuries has finally been broken en masse – and for the good. Whatever the outcome of current events – whether the regime falls in short order or over a protracted period – there is no going back. A proverbial ‘Caesar crossing the Rubicon’ event has indeed transpired in Iran with Iranian women leading the charge: events the regime itself triggered it with the murder of Mahsa Amini on 13 September 2022.

However, it should be underscored that while Western governments and their corporate allies may be presently rubbing their hands in glee at the prospects of the fall of the Iranian mullocracy with the markets and profits it could potentially open up for them; the fact is that this Iranian Revolution has a conspicuous leftwing and social democratic thrust to it. Iranian women and men are not fighting and dying on the streets of Iran so that the warped neoliberalism of the mullahs is replaced with the neoliberalism of Wall Street and Davos. They are not fighting and dying to transform Iranian society into a comprador petro-state like it was under the Pahlavis or what occurs in the Gulf Arab kingdoms. Iranian women are fighting and dying for their rights as human beings against vicious religious patriarchy with the men behind them fighting for social and economic equity that both the shahs as well as the mullahs have denied them for over a century and longer. When – and not if – this Revolution succeeds a native secular social democratic order will surely replace it, and one that will be the legacy of Qurrat’ul-ʿAyn as well as Mohammad Mossadegh both.

While some sectors of the global Left may sceptically be looking on at current events in Iran as some kind of a predictable ‘regime change’ event orchestrated by the West, let me assure the readership that the Iranian feminist Revolution of 2022 is far from this in its on-the-ground motivations and thrust. The people of Iran are simply sick and tired of the corrupt, heavy-handed totalitarian theocracy foisted upon them by the ayatollahs, with its medieval dress codes, which has literally impoverished them culturally as well as materially during four decades. No need to mention that the majority of this generation fighting and dying on the streets of Iran presently didn’t even sign up for the theocracy. As such it is a duty of what remains of a Western Left – namely, those not seduced by the black propaganda of the Kremlin, its alt-media ecology online and social media mouthpieces – to support the women and men of Iran in their struggle against the totalitarian Khomeinist theocracy and its patriarchal nightmare. Western feminists especially hold a solemn duty in supporting their Iranian sisters arm and arm, shoulder to shoulder until victory because should this Revolution succeed – which I am confidant it will – it will also have been their Revolution for the liberation of women everywhere, and it will be a world-historical game-changer like none other before it, not to mention hammering a nail in the coffin of Islamism everywhere since Islamist government was a trend Khomeini and his counter-Revolution first set. Let Ṭāhirih Qurrat’ul-ʿAyn, the ‘Remover of the Veil’, the ‘return’ of Fātima, be the example – and maybe, whether as herself or as Fātima al-Zahrāʾ, even the leader of this Iranian Woman’s Revolution against Islamist patriarchy.

To Women, Life and Freedom in Iran and across the world! Yā Ṣāḥibu-z-Zamān Fātima!

Wahid Azal is an independent scholar and political commentator living in Berlin, Germany. He can be reached on his email at wahidazal66@gmail.com

At CounterPunch, we don't shake our readers down for money every month or every quarter. We only ask you twice a year, but when we ask we really mean it. So, please, help as much as you can. Donate $4/month. Get subscription to CounterPunch+
All contributions are tax-deductible. PLEASE DONATE TODAY.