No One in Physics Dares Say So, but the Race To Invent New Particles Is Pointless

In private, many physicists admit they do not believe the particles they are paid to search for exist – they do it because their colleagues are doing it

October 2, 2022 Sabine Hossenfelder The Guardian
Printer friendly
No One in Physics Dares Say So, but the Race To Invent New Particles Is Pointless Published October 2, 2022 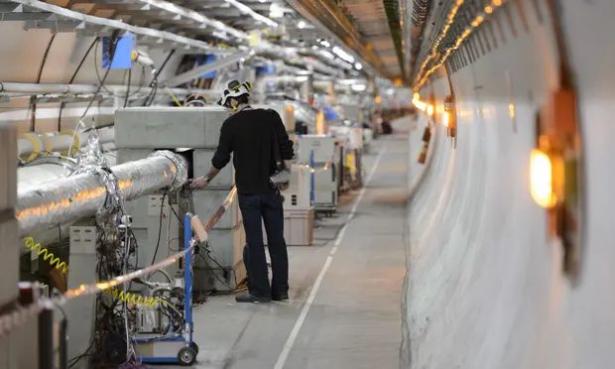 ‘The Large Hadron Collider (LHC) hasn’t seen any of the particles theoretical physicists have hypothesised, even though many were confident it would.’ A technician works on the LHC, near Geneva, Switzerland. ,Laurent Gilliéron/AP

Imagine you go to a zoology conference. The first speaker talks about her 3D model of a 12-legged purple spider that lives in the Arctic. There’s no evidence it exists, she admits, but it’s a testable hypothesis, and she argues that a mission should be sent off to search the Arctic for spiders.

The second speaker has a model for a flying earthworm, but it flies only in caves. There’s no evidence for that either, but he petitions to search the world’s caves. The third one has a model for octopuses on Mars. It’s testable, he stresses.

Kudos to zoologists, I’ve never heard of such a conference. But almost every particle physics conference has sessions just like this, except they do it with more maths. It has become common among physicists to invent new particles for which there is no evidence, publish papers about them, write more papers about these particles’ properties, and demand the hypothesis be experimentally tested. Many of these tests have actually been done, and more are being commissioned as we speak. It is wasting time and money.

All experiments looking for those particles have come back empty-handed, in particular those that have looked for particles that make up dark matter, a type of matter that supposedly fills the universe and makes itself noticeable by its gravitational pull. However, we do not know that dark matter is indeed made of particles; and even if it is, to explain astrophysical observations one does not need to know details of the particles’ behaviour. The Large Hadron Collider (LHC) hasn’t seen any of those particles either, even though, before its launch, many theoretical physicists were confident it would see at least a few.

Talk to particle physicists in private, and many of them will admit they do not actually believe those particles exist. They justify their work by claiming that it is good practice, or that every once in a while one of them accidentally comes up with an idea that is useful for something else. An army of typewriting monkeys may also sometimes produce a useful sentence. But is this a good strategy?

Experimental particle physicists know of the problem, and try to distance themselves from what their colleagues in theory development do. At the same time, they profit from it, because all those hypothetical particles are used in grant proposals to justify experiments. And so the experimentalists keep their mouths shut, too. This leaves people like me, who have left the field – I now work in astrophysics – as the only ones able and willing to criticise the situation.

There are many factors that have contributed to this sad decline of particle physics. Partly the problem is social: most people who work in the field (I used to be one of them) genuinely believe that inventing particles is good procedure because it’s what they have learned, and what all their colleagues are doing.

But I believe the biggest contributor to this trend is a misunderstanding of Karl Popper’s philosophy of science, which, to make a long story short, demands that a good scientific idea has to be falsifiable. Particle physicists seem to have misconstrued this to mean that any falsifiable idea is also good science.

In the past, predictions for new particles were correct only when adding them solved a problem with the existing theories. For example, the currently accepted theory of elementary particles – the Standard Model – doesn’t require new particles; it works just fine the way it is. The Higgs boson, on the other hand, was required to solve a problem. The antiparticles that Paul Dirac predicted were likewise necessary to solve a problem, and so were the neutrinos that were predicted by Wolfgang Pauli. The modern new particles don’t solve any problems.

In some cases, the new particles’ task is to make a theory more aesthetically appealing, but in many cases their purpose is to fit statistical anomalies. Each time an anomaly is reported, particle physicists will quickly write hundreds of papers about how new particles allegedly explain the observation. This behaviour is so common they even have a name for it: “ambulance-chasing”, after the anecdotal strategy of lawyers to follow ambulances in the hope of finding new clients.

Ambulance-chasing is a good strategy to further one’s career in particle physics. Most of those papers pass peer review and get published because they are not technically wrong. And since ambulance-chasers cite each other’s papers, they can each rack up hundreds of citations quickly. But it’s a bad strategy for scientific progress. After the anomaly has disappeared, those papers will become irrelevant.

This procedure of inventing particles and then ruling them out has been going on so long that there are thousands of tenured professors with research groups who make a living from this. It has become generally accepted practice in the physics community. No one even questions whether it makes sense. At least not in public.

I believe there are breakthroughs waiting to be made in the foundations of physics; the world needs technological advances more than ever before, and now is not the time to idle around inventing particles, arguing that even a blind chicken sometimes finds a grain. As a former particle physicist, it saddens me to see that the field has become a factory for useless academic papers.

Sabine Hossenfelder is a physicist at the Frankfurt Institute for Advanced Studies, Germany. She is author of Existential Physics: A Scientist’s Guide to Life’s Biggest Questions and creator of the YouTube Channel Science Without the Gobbledygook.

We, at The Guardian, have a small favour to ask. Tens of millions have placed their trust in the Guardian’s fearless journalism since we started publishing 200 years ago, turning to us in moments of crisis, uncertainty, solidarity and hope. More than 1.5 million supporters, from 180 countries, now power us financially – keeping us open to all, and fiercely independent.