labor Being in a Union Means You Could Make $1.3 Million More Over Your Lifetime

Workers who are never in a union were projected to earn around $2.1 million their whole careers, while those who were in unions for their whole careers were estimated to make $3.4 million, according to a Cornell University study.

October 11, 2022 Juliana Kaplan and Madison Hoff  Business Insider
Printer friendly
Being in a Union Means You Could Make $1.3 Million More Over Your Lifetime Published October 11, 2022 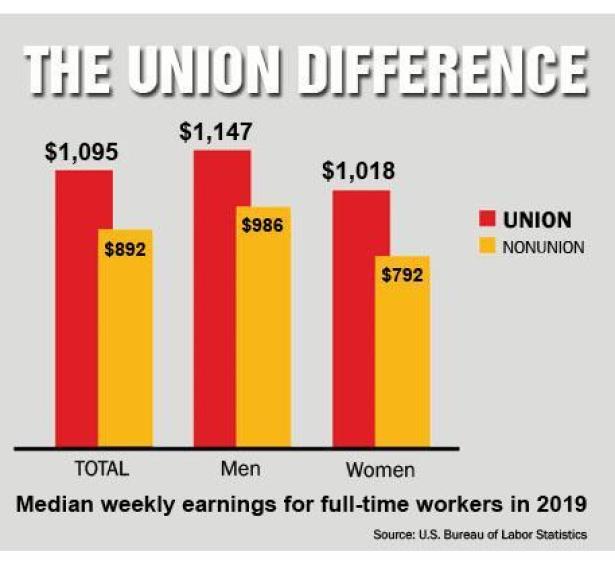 If you want to make a million more dollars over your lifetime, there's one solution: Join a union.

That's according to a new paper in Cornell University's ILR Review. Researchers Zachary Parolin of Bocconi University and Tom VanHeuvelen of University of Minnesota Twin Cities examined the advantages of being part of a union throughout your entire career.

To quantify the impact of unionization on lifetime earnings, they used the Panel Study of Income Dynamics, which tracks some Americans every several years. The researchers zoomed in on men who would've been in their late 20s in the 1960s and 1970s, and tracked their earnings through retirement as well as whether or not they were union members.

It's long been clear that union members make more than their non-unionized peers. In 2021, according to the Bureau of Labor Statistics, non-unionized workers made just 83% of unionized workers' wages — but the study shows the long-term effects of a career spent as a union member. The data also comes after decades of American wealth becoming more and more concentrated at the top, as union membership tumbled and continues to drop.

That's significant, especially with the "college premium" that higher education affords for lifetime earnings. Going to college is still one of the most reliable ways to boost how much money you'll make, although many borrowers then come up against thousands — and sometimes hundreds of thousands — of dollars in student loan debt. But unionization rates have declined over time, and that spells bad news for workers without a college degree.

"If suddenly the United States lost the college premium that would be a disaster," VanHeuvelen said. "A lot of newspaper articles would be written about that. But it seems like we've lost something equivalent for America's working class."

There are some signs of life in the previously small labor movement. Union approval is at its highest since 1965, according to Gallup survey results. Workers have been pushing back for over a year, sparking a crop of unions in places like Starbucks, Amazon, and Chipotle. The number of union representation petitions filed in fiscal year 2022 increased by 53%, according to the National Labor Relations Board. But all of that is still coming up against low union membership rates and other organizing challenges.

"The process of de unionization that's occurred over the last half century or so has really undermined an important second channel through which people could find a path of upward economic attainment," VanHeuvelen said.