books A Compelling Military History of the Civil Rights Fight

This new examination of the civil rights movement considers it in terms of a military-style campaign. 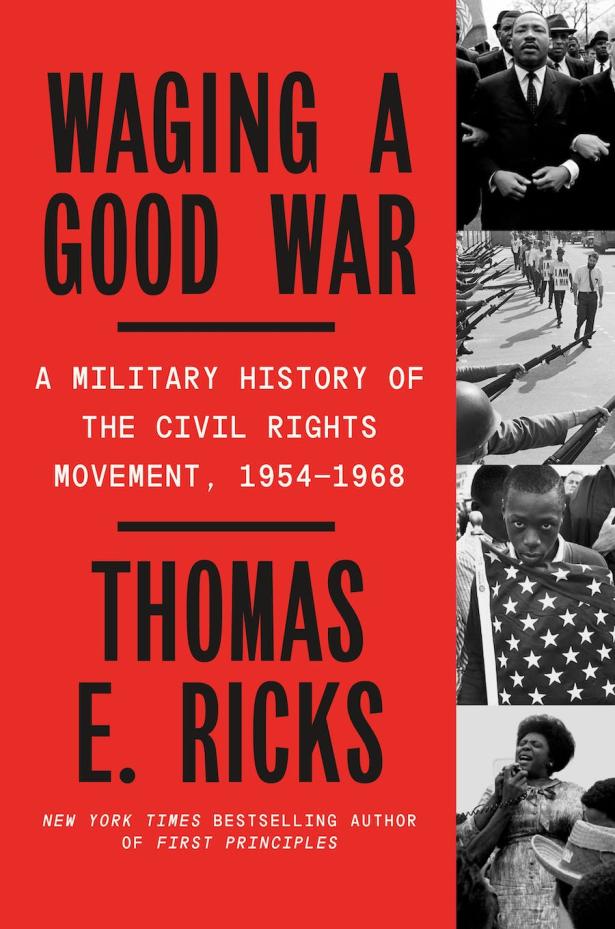 Thomas E Ricks has written a sweeping history of the civil rights movement of the 1960s, retelling many of its moments of triumph and tragedy, from the Montgomery bus boycott spawned by the courage of Rosa Parks in 1955 to the bodies bloodied and broken by Alabama troopers on the Edmund Pettus Bridge 10 years later.

The stories are familiar but Ricks is the first author to mine this great American saga for its similarities to a military campaign.

James Lawson, a key figure in training a cadre of influential movement leaders, called it “moral warfare”. Cleveland Sellers said the 1964 Freedom Summer campaign in Mississippi “was almost like a shorter version” of the Vietnam war. Ricks points out that “the central tactic of the movement – the march – is also the most basic of military operations”.

But the greatest value of this compelling account lies in its capacity to remind us how a relatively small group of intelligent, determined, disciplined and incredibly courageous men and women managed after barely a decade of pitched battles to transform the US “into a genuine democracy” for the very first time.

As Martin Luther King Jr remarked, the attempt to undo the ghastly effects of the 90-year campaign after the civil war to keep Black Americans effectively enslaved became an effort to “redeem the soul of America”.

The crucial ingredient was the nonviolent philosophy of Mahatma Gandhi. Ricks writes that it was “at the core” of how the movement “attracted people and prepared them for action”. It was the dignity of the marchers, who declined to counter-attack the hoodlums who viciously attacked them, that would gradually “catch the attention of the media, and thereby the nation”.

As Gandhi explained it, nonviolence did not “mean meek submission to the will of the evil doer”. It meant “the pitting of one’s whole soul against the will of the tyrant”. As an American disciple explained, “Your violent opponent wants you to fight in the way to which he is accustomed. If you adopt a method wholly new to him, you have thus gained an immediate tactical advantage.”

Early in the Montgomery protest, after a bomb exploded on the porch of King’s house, “filling the front room with smoke and broken glass”, the budding leader demonstrated his commitment. When supporters gathered, he ordered, “Don’t get your weapons. We are not advocating violence.” Go home, he said, “and know that all of us are in the hands of God.”

King said Montgomery “did more to clarify my thinking on the question of nonviolence than all of the books I had read … Many issues I had not cleared up intellectually were now solved in the sphere of practical action.”

As in a conventional war, martyrs played a vital role in inspiring soldiers. Nearly all of the students who led sit-ins at Nashville lunch counters had visions in their head of Emmett Till, the 14-year-old boy who was tortured and lynched in Mississippi in 1955, after being accused of offending a white woman.

During Freedom Summer, in Mississippi in 1964, the brutal murders of James Chaney, Andrew Goodman and Michael Schwerner became the turning point in the campaign to get the federal government to transform the nation.

Two of the victims were white. Ricks writes: “The simple, hard fact was that the American media and public cared more about killings of whites than of blacks. The Student Nonviolent Coordinating Committee’s hard calculation about white lives mattering more than Black ones had been confirmed … It was no different from Winston Churchill celebrating the Japanese attack on Pearl Harbor.”

But the most influential martyrs of all were John Lewis and 140 fellow marchers who were brutally attacked as they tried to march from Selma to Montgomery. The images blanketed network television, leading directly to Lyndon Johnson’s speech before Congress one week later in which he electrified the nation by declaring: “We shall overcome.” Just four months later the president signed the Voting Rights Act of 1965, one of the movement’s two most significant legislative accomplishments.

“Now you were having brought into every American living room … the brutality of the situation,” remembered Bayard Rustin, one of the key architects of King’s March on Washington. “I think that if we had television 50 years earlier, we would have gotten rid of lynching 50 years earlier.”

Ricks does a tremendous job of putting the reader inside the hearts and souls of the young men and women who risked so much to change America. In just three months in Mississippi in summer 1964, there were at least six murders, 80 beatings, 35 shootings and 35 church bombings, not to mention policemen who routinely put guns to the heads of protesters and cocked them without firing.
“There were incipient nervous breakdowns walking all over Greenwood, Mississippi,” Sally Belfrage wrote to a friend. Her roommate, Joanne Grant, said it was an understatement to say she was frightened most of the time. And yet, “as with all of us, it was the best time in my life. I felt we were changing the world.”

Ricks of course points out all the reversals of this progress accomplished by disastrous supreme court decisions and hatred rekindled by Donald Trump. He ends by calling for a “third reconstruction”, a new “focused effort to organize, train, plan, and reconcile”.

I only hope this riveting account of the glorious exploits of so many civil rights pioneers will inspire a new generation to make that gigantic organizational effort.

Charles Kaiser is the author of 1968 in America, The Gay Metropolis and most recently The Cost of Courage.