The real culprit here is the diminution of US productive capacity and supply chain disruption caused by four decades of neoliberal policies – disinvestment, deregulation, outsourcing - which have prevented supply-side measures to bring prices down. 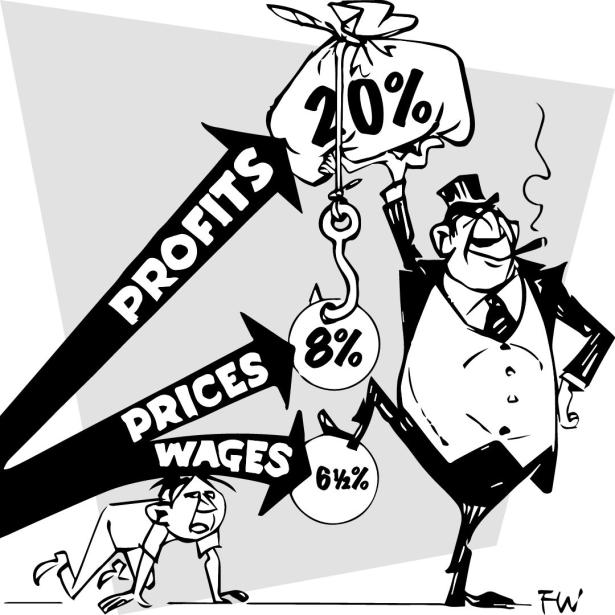 Fred Wright cartoon from the 1970s, updated to reflect increases in corporate profits, prices and wages over the past year.,Fred Wright / UE

Federal Reserve chair Jerome Powell’s recent speech at the Jackson Hole conference, delivered to an audience of central bankers from around the world, was a highly anticipated event. He arrived there a chastened man, having previously claimed that US inflation was a transitory phenomenon while implementing the lax monetary policies that many blamed for its recent surge. Could he now pull off a ‘soft landing’, bringing inflation back down from its forty-year high of 9.1% to the desired 2%, without causing a recession?

Central banks have various tools at their disposal for managing inflation: higher rates, quantitative tightening (i.e. selling assets to reduce liquidity in the system) and managing expectations about future monetary policy through ‘forward guidance’. Powell began raising the policy rate in March, taking it from the pandemic-era low of 0.25% to 3.25% by the time he arrived at Jackson Hole in late August, through a series of incremental rises. Yet these increases still left the headline rate well below inflation, making real rates negative. Meanwhile, the debate over monetary policy heated up. Inflation hawk Larry Summers accused Powell of underestimating the problem and doing too little too late. Another hawk, Henry Kaufman, advised him to shock the markets – to ‘hit them in the face’ as Paul Volcker had done in 1980, by hiking interest rates to 20%.

By inducing a deep and prolonged recession, Volcker’s move had elicited a backlash from progressive economists, with Robert Solow likenening it to ‘burning down the house to roast the pig’. Today, the prospect of a similar hike has prompted renewed criticism of the monetarist perspective which views inflation as the result of an increase in the money supply relative to output. For inflation doves, such as former Clinton Labor Secretary Robert Reich, the current period of inflation was not caused by the fiscal and monetary stimuli of the pandemic, unprecedented though they were. Nor is it the result of a wage-price spiral – since the uptick in union activity remains relatively modest in historical terms. Doves claim that inflation is rather the outcome of factors beyond the Federal Reserve’s ken: food and fuel price rises sparked by the war in Ukraine, plus ongoing price-gouging by large corporations. Hence, it cannot be solved by raising interest rates; it requires solutions such as those set out in Jamal Bowman’s Emergency Price Stabilization Act: monitoring and regulating consumer prices, alongside measures to safeguard the supply of essential goods and services.

The hawks are certainly wrong to see inflation as a purely monetary issue. Indeed, very little of the pandemic-related stimulus, fiscal or monetary, made it into the pockets of ordinary people. When it did, it largely went towards debt repayments and had a limited impact on demand. Yet the doves are also wrong to identify war-induced food and fuel prices as a major contributor. In the US, the August 2022 inflation rate of 8.3% may have been boosted by these factors; but the core inflation figure of 6.3% – far higher than the European average – reflected a structural malady. The real culprit here is the diminution of US productive capacity, caused by four decades of neoliberal policies – disinvestment, deregulation, outsourcing – which have rendered the economy extremely vulnerable to supply chain disruption, and prevented supply-side measures to bring prices down.

That diminution is the flip-side of the ceaseless growth in financial activity since the early 1980s. This process is usually termed ‘financialization’, although the plural ‘financializations’ would be more accurate, since each historic expansion of the financial sector has involved different structures, practices, regulatory regimes and assets. In recent decades, financialization has come to rest on asset bubbles sustained by lax monetary policy. This has created the conditions for today’s rising prices, while inhibiting the only sort of anti-inflationary policy of which the current system is capable. Yet this crucial dynamic is overlooked by economists across the political spectrum.

Prima facie, hawks and doves pull at opposite ends of the ‘dual mandate’ that the Federal Reserve acquired in 1977, when the Humphrey-Hawkins Act added high employment levels to its original price stability mandate. Some progressive economists now point to Alan Greenspan’s tenure in the 1990s as ‘an instructive model of what a full employment economy can look like’, implying that the Federal Reserve’s current leadership can and should revert to this paradigm. Yet the full employment mandate – a last gasp of Keynesianism in an increasingly hostile political environment – was never taken seriously. Indeed, Volcker proceeded to violate it almost immediately with his historic rate hikes. Since then, the Federal Reserve has consistently curbed both employment and wages, although this has often been obscured by the statistical inflation of employment figures (for example, counting the partially employed while ignoring declining labour force participation).

Greenspan made the dramatic decision to increase interest rates despite inflation running at a modest level. To justify this step, he cited Milton Friedman’s complaint that the Federal Reserve always raised interest rates too late, and insisted instead on getting ‘ahead of the game’, pre-empting inflation rather than responding to it. Greenspan thus extinguished the nascent manufacturing revival which, as Robert Brenner writes, held out the possibility of a ‘break beyond stagnation’. When Greenspan eventually decided to loosen monetary policy, it was not to support the expansion of production and employment, but to inflate asset bubbles, starting with the so-called ‘Greenspan put’: an injection of liquidity into the financial system in response to the stock market crash of 1987. This policy (which was continued by Greenspan’s successors, such that it became known as the ‘Federal Reserve put’) generated speculative bonanzas for the rapidly deregulating financial sector and provided generous liquidity after each inevitable crash. It was rightly criticised for creating systemic moral hazard by inducing financial institutions to increase their risk exposure.

In the 2000s, asset bubbles grew by new orders of magnitude and loose monetary policy became a permanent strategy rather than an episodic fix. Yet, because not much of this money flowed into productive investment or translated into rising demand, its inflationary effect was negligible. Moreover, other secular trends kept inflation low: workers were too insecure to fight for wage increases, even amid relatively high employment; manufacturing supply chains extended to producers in lower-wage locations; immigration cheapened services; and income deflation in the Third World suppressed global demand and commodity prices. Dollar overvaluation was also deeply intertwined with the Federal Reserve’s bubbles. By diverting investible funds from productive to financial investment, these bubbles – the market stocks of the 1990s, housing and credit of the 2000s, the ‘everything bubble’ of the 2010s – attracted enough foreign funds to dollar denominated assets to counter the downward pressure of US current account deficits on the dollar. This, too, helped to subdue inflation.

Since Greenspan lowered interest rates to deal with the 2000 dot-com crash, they have never returned to their 1990s peak. Meanwhile, quantitative easing – effectively Federal Reserve asset purchases – has become a systemic imperative to keep both asset markets and the dollar high. With fiscal policy largely missing in action (aside from tax cuts for the rich), this monetary policy created a highly peculiar political economy. Thanks to declining industry, low investment and fiscal austerity, the consumption of a narrowing well-to-do layer, facilitated by the ‘wealth effects’ of asset bubbles, came to act as the country’s primary economic motor. As a result, anaemic growth and extreme inequality is all that contemporary US capitalism can manage.

In this context, Powell’s priority is to avoid Volckeresque rate rises on the wing of slight rate increases and the prayer of forward guidance. Why? Because hawkish rate hikes – the only effective weapon against inflation from a monetary policy perspective – would burst the asset bubbles on which the American financial sector and ultra-rich depend. Back in the late 1970s, Volcker did not have to worry about this risk; but in the early 2020s, Powell very much does. Policy interest rates of 5% triggered the collapse of the housing and credit bubbles in 2007; the current 3.25% rate has hit real estate and venture capital, while stocks have suffered the worst streak of quarterly losses since 2008. Given the fragile makeup of the US economy, rate hikes constitute a real risk, which means that the Federal Reserve has become largely impotent. No wonder it is described in the pages of the FT as ‘the least credible Fed in the markets’ estimation since the 1970s’.

The markets’ lack of confidence reflects a structural dilemma. If Powell increases rates to required levels, the US can expect a recession that will make that of the 1980s seem like a boom. But if, as I believe is more likely, he refuses to do so, the US can expect chronic inflation whose origins lie in the productive debility of the US economy, recently exacerbated by supply chain disruption, trade and technology wars with China, and self-destructive sanctions on Russia. The Federal Reserve faces a fork in the road: one where both paths will damage working-class incomes and wellbeing.

In this sense, both hawks and doves miss the elephant in the room: financializations backed by easy money. The dynamics of financialization contribute to inflation by raising the value of housing and commodities while allowing the rich to maintain their spending at inflated prices. While doves rightly emphasize the need to expand production to ease inflation, they fail to appreciate the scale of state intervention this would entail. For four long decades, neoliberal policies have entrenched the Long Downturn, reversing Janos Kornai’s old adage that socialism is a supply-constrained system while capitalism is a demand-constrained one. Making contemporary US capitalism productive again would involve not only reversing the logic of financialization; it would require a state-led programme to lift supply constraints, which is almost unthinkable within the parameters of the present system.

All articles published since 1960 are available on the website. Subscribers to the print edition get online access to all articles; two or three from each new issue are available free online.

NLR is also published in Spanish and selected articles are available in Greek, Italian, Korean, Portuguese and Turkish.

Submissions to the journal are welcome, but please consult the submission guidelines before sending in an article or book review. For queries concerning advertising, bookshop distribution or subscriptions, please consult the full contact details.