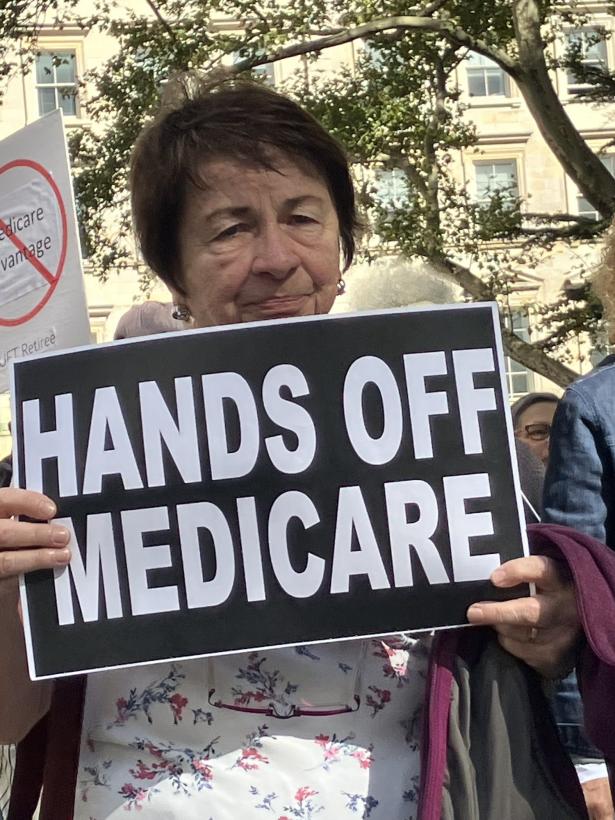 Aiming to reset the debate over the future of the healthcare provided retired New York City civil servants, the president of the largest municipal union insists he wants the City Council to change the city’s administrative code — not to force retirees into a controversial Medicare Advantage Plan as critics claim — but to preserve all city unions’ collective bargaining rights.

On an Oct. 20 virtual press call, Michael Mulgrew, president of the 200,000 member United Federation of Teachers, told reporters that New York State Judge Lyle Frank’s ruling last October “undid 40 years of collective bargaining” and that while an appeal is still pending, the City Council needs to revise the administrative code to preserve the unions’ ability to offer a myriad of healthcare plans to the city’s 200,000 retirees.

“Right now, we offer eight plans to our retirees, two of them premium free and the other six are what is called pay up plans” and what that court ruling says is that “whatever we go with in the future the city has the obligation to offer one for free,” Mulgrew told reporters. “If we don’t move forward with Medicare Advantage, if we don’t get that administrative code change than we have to eliminate all those plans or figure out a way to pay for them, all of which is not going to happen when we are dealing with all the other healthcare costs.”

In addition to Mulgrew, the leaders of the unions that represent a majority of the city’s 300,000 active civil servants represented by the Municipal Labor Committee, as well as Mayor Adams, are all calling for the City Council to revise the city’s Administrative Code 12-126.

The ongoing controversy is an outgrowth of last year’s successful retiree revolt against then-Mayor Bill de Blasio and the Municipal Labor Committee’s proposal to shift retirees to a privatized Medicare Advantage program in hopes of realizing some savings.

City Hall and the MLC said the plan, branded as Retiree Health Alliance, which was going to be run by Anthem and Empire Blue Cross Blue Shield, would produce $600 million in savings with no degradation in coverage. Retired civil servants and the NYC Organization of Public Service Retirees countered the change threatened retirees’ continuity of care, would cost more and would cover less.

Tens of thousands of city retirees opted out. One key issue was a requirement that city retirees who opted out of the new offering would have to pay a $191 monthly premium for their old plan. Subsequently,  the two health insurance companies fronting the controversial plan withdrew.

The New York City Organization of Public Service Retirees successfully challenged  the city in court bringing the implementation of the plan to a standstill at the start of the Adams’ administration. That litigation continues.

While Judge Frank green-lighted much of the MLC’s plan that cleared the way for Medicare Advantage, he cited  the binding nature of the language of the city’s Administrative Code 12-126 which committed the city to provide premium-free healthcare for retirees.

The MLC and the Office of Labor Relations are also in the process of soliciting proposals for a new health benefits manager for the city’s 300,000 active duty civil servants amidst an unprecedented double-digit surge in health care premiums across the country. In New Jersey, public sector workers are protesting a 20 to 24-percent jump in premiums, while the American Federation of Government Employees sounded the alarm for a double-digit premium hike for federal civil servants in all 50 states.

Mulgrew told  reporters that while talks were ongoing, “the City Council is now understanding this [revising Administrative Code 12-126] has nothing to do with Medicare Advantage.” Yet while the MLC’s behind-the-scenes lobbying efforts have been ongoing for weeks, no City Council member has yet publicly agreed to introduce the bill required to make the controversial changes.

“Mr. Mulgrew’s proposal to shift retirees' health care to a Medicare Advantage plan is one of the most harmful policies to ever target vulnerable, older New Yorkers,” wrote Marianne Pizzitola, a retired FDNY EMT and president of the New York City Organization of Public Service Retirees. “His callous comments today were an insult to those who have committed to public service and those who want to pursue a career in public service. His justification for the plan is factually wrong. Thousands of New Yorkers have called the Mayor and our City Council members to urge them not to vote for the proposal to amend 12.126 because of the harm it will do. If the City wants to get serious about finding health care savings, we are ready to engage with ideas that would protect all retirees and public servants.” 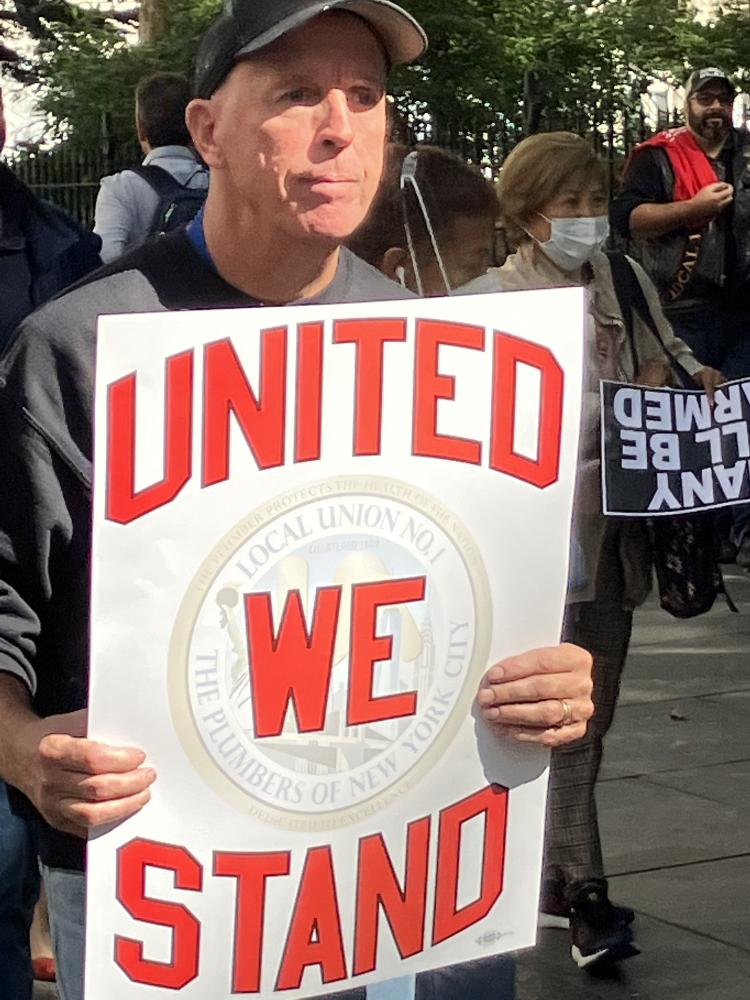 Local 1 Plumbers joined other trade unionists outside City Hall earlier this month in a large and vocal rally against plans to shift retiree healthcare benefits to a Medicare Advantage plan.

Last month, in  an op-ed in the Daily News Pizzitola wrote the city’s existing administrative code guaranteed “the city would pay for a choice of health insurance plans—up to a defined dollar cap. For 55 years, every teacher, firefighter, police officer, nurse and others who served the city knew they would have access to a health insurance plan that met their families’ needs.”

The call for revising the city’s Administrative Code has split the MLC. The leaders of the Professional Staff Congress, representing 30,000 workers at the City University of New York, along with DC 37 Local 2507, representing FDNY EMS, as well as the Uniformed Firefighters and Uniformed Fire Officers Association have gone on record opposing the changes which they contend could have serious unintended consequences.

Retirees who oppose the shift to a Medicare Advantage plan point to a recent study by the Department of Health and Human Services Inspector General that found the plans run by for profit providers showed that the “plans  sometimes denied or delayed patients’ access to medically necessary services, even though the requests met Medicare coverage rules.”

Around the same time that the fire unions announced a very public lobbying campaign to push back against any changes to the city’s administrative code, the New York Times published a devastating expose on the nation’s leading Medicare Advantage plans.

“Medicare Advantage, a private-sector alternative to traditional Medicare, was designed by Congress two decades ago, to encourage health insurers to find innovative ways to provide better care at lower cost,” reported the Times. “If trends hold, by next year, more than half of Medicare recipients will be in a private plan.”

The newspaper reported that in “a survey of dozens of fraud lawsuits, inspector general audits and investigations by watchdogs” showed “how major health insurers exploited the program to inflate their profits by billions of dollars.”

Under the Medicare Advantage the federal government pays “insurers a set amount for each person who enrolls, with higher rates for sicker patients. And the insurers, among the largest and most prosperous American companies, have developed elaborate systems to make their patients appear as sick as possible, often without providing additional treatment, according to the lawsuits.”

As a consequence, a strategy devised “to help lower health care spending has instead become substantially more costly than the traditional government program it was meant to improve.”

The Times analysis found eight “of the 10 biggest Medicare Advantage insurers — representing more than two-thirds of the market — have submitted inflated bills, according to the federal audits. And four of the five largest players — UnitedHealth, Humana, Elevance and Kaiser — have faced federal lawsuits alleging that efforts to over diagnose their customers crossed the line into fraud.”

During Mulgrew’s briefing, Work-Bites asked him about the blockbuster Times reporting. In response, Mulgrew framed the issue of Medicare Advantage as more a branding problem than a possibly flawed strategy.

“The only question I asked over and over — but I knew the answer but was hoping someone would tell me differently — do we really have to call it Medicare Advantage in the title? And the answer kept coming back — Yes — if you don’t have that in there you won’t qualify for the additional federal subsidies,” he said.

Mulgrew’s outlined for the press his union’s track record containing healthcare costs that he said generated $3.4 billion in annually recurring savings. He used the example of the UFT imposing a $500 co-pay for members who went to the hospital emergency room as an example of proactive cost containment that also improved the quality of care.

“If you were admitted to the hospital that co-pay would drop and get it all back,” Mulgrew said. “We dropped the costs dramatically of Emergency Room visits and that’s the kind of behavior we have been constantly addressing. Look at the date and go after it. There are all sorts of procedures that can be done in the doctor’s office and not in the hospital. Why should we be charged $8,000 for something that should be $600.”

Mulgrew continued. “We had a clear understanding, both ourselves and the de Blasio administration, that the healthcare industry itself was becoming more profit driven and it was more about the quarterly profit line increases than it is the care of the patients,” he said. “Over the last several years, a hospital stay in the United States has gone up [in price] 40 percent. At the same time, hospital stay in New York City has gone up 70 percent….we are talking about multi-million dollar bonuses to CEOs running hospitals and hundreds of millions of dollars in profits on a yearly basis even during g COVID when they were all saying they were losing money.”

Mulgrew maintains his union was up to the challenge of creating a Medicare Advantage Plan it could “basically design” from scratch with a series of guarantees that provides for oversight by  a third independent party to ensure the contract is adhered to.

And while Mulgrew insisted the city’s public unions had no choice but to press ahead with their local plans, the healthcare cost crisis was undermining teacher recruitment and retention across the nation.

“The bigger piece here is when nationally is everyone saying enough is enough and this has to stop — we have multiple locals across the country in the AFT where they are literally getting raises and losing money because they are getting three-percent raises but absorbing six-percent additional healthcare costs on a yearly basis.”

As for finding cost containment relief in the proposed New York Health Act, which would introduce single payer and end the linkage of insurance to employment, Mulgrew said his union’s calculations were that it was impractical because it would “blow a massive” hole in the state budget.

He said ultimately, the federal government would have to intervene. Mulgrew expressed disappointment in the recently passed federal Inflation Reduction Act. “For us right now, the only solution is a  federal solution which is why it was slightly disappointing that the Inflation Reduction Act only had provisions for Medicare to negotiate drug costs and the other things about healthcare were ripped out of it because they could not get the votes for it.”