The victory completes a stunning political revival for Mr. da Silva — from the presidency to prison and back — that had once seemed unthinkable. 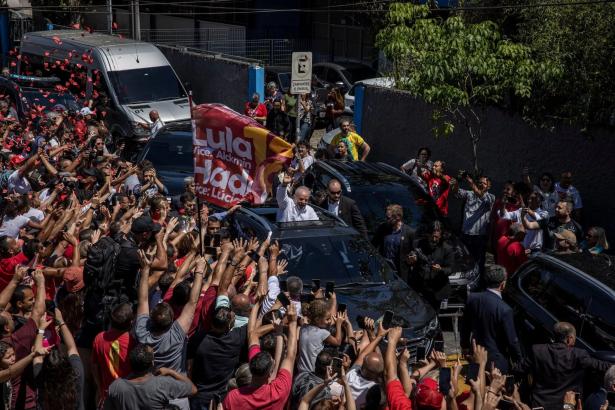 Luiz Inácio Lula da Silva, the leftist candidate who was elected president, on the way to vote in São Bernardo do Campo, Brazil, on Sunday.,Victor Moriyama for The New York Times

The victory completes a stunning political revival for Mr. da Silva —from the presidency to prison and back— that had once seemed unthinkable.

It also ends Mr. Bolsonaro’s turbulent time as the region’s most powerful leader. For years, he attracted global attention for policies that accelerated the destruction of the Amazon rainforest and exacerbated the pandemic, which left nearly 700,000 dead in Brazil, while also becoming a major international figure of the far right for his brash attacks on the left, the media and Brazil’s democratic institutions.

More recently, his efforts to undermine Brazil’s election systemdrew particular concern at home and abroad, as well as worldwide attention to Sunday’s vote as an important test for one of the world’s largest democracies.

Without evidence, the president has criticized the nation’s electronic voting machines as rife with fraud and suggested he might not accept a loss, much like former President Donald J. Trump. Many of his supporters vowed to take to the streets at his command.

The results on Sunday made clear that tens of millions of Brazilians had grown tired of his polarizing style and the frequent turmoil of his administration. It was the first time an incumbent president failed to win re-election in the 34 years of Brazil’s modern democracy.

Still, Mr. da Silva won with the narrowest margin of victory over that same period, signaling the deep divide that he will confront as president.

Mr. da Silva, 77, a former metalworker and union leader with a fifth-grade education, led Brazil during its boom in the first decade of the century, but he was later convicted on corruption charges after he left office and spent 580 days in prison.

Last year, the Supreme Court threw out those convictions, ruling that the judge in his cases was biased, and voters rallied behind the man known simply as “Lula.”

Mr. da Silva’s election brings an end to a presidential race that was widely regarded as one of the most important votes in Latin America in decades, a match between perhaps Brazil’s two biggest living political figures, with starkly different visions to reverse the country’s fortunes.

His victory also pushes Brazil back to the left, extending a string of leftist victories across Latin America, fueled by a wave of anti-incumbent backlash. Six of the region’s seven largest countries have now elected leftist leaders since 2018.

Mr. da Silva, a left-wing firebrand who for decades made his name as a champion of the poor, confronts significant challenges. Brazil faces environmental threats, rising hunger, a sputtering economy and a deeply divided population.

Despite his victory, a sizable portion of Brazil’s 217 million people still view Mr. da Silva as corrupt because of the vast government kickback scheme uncovered years after he left office. And while his corruption convictions were nullified, Mr. da Silva was never ruled innocent.

Yet, amid those flaws, the strong opposition to Mr. Bolsonaro and his far-right movement was enough to carry Mr. da Silva back to the presidency. “He’s not the solution to every problem. But he’s our only hope,” said Stefane Silva de Jesus, a 30-year-old librarian, after she cast her ballot for Mr. da Silva in Rio de Janeiro.

Mr. da Silva’s central pitch to voters was that his eight years in office were Brazil’s best moment and that, after four years of instability under Mr. Bolsonaro, he would “reestablish harmony” in the country.

“Bolsonaro Must Concede the Election”

“Brazilians have chosen hope over fear and hate,” Weisbrot said. “Lula was the country’s most popular president ever, and for good reason: under his presidency, the country returned to economic progress including increased employment, wage growth, and poverty reduction, after more than two decades of deep economic failure.

“Bolsonaro should immediately concede, since there is no doubt about the election results, and he repeatedly alleged that a Lula victory would have to be fraudulent and he would not accept the results, creating fears of post-election violence.”

Bolsonaro has encouraged violence against minorities, praised military dictatorship and torture, and was excoriated for his response to the COVID pandemic that left hundreds of thousands of Brazilians dead.

Lula’s victory comes despite some 560 police roadblocks and other actions that impeded voters’ travel to polling stations early in the day, especially in the country’s northeast — traditionally a Lula and Workers’ Party stronghold area.

Lula’s return to the presidency will follow six years of attacks on Brazil’s democratic institutions that have included a coup d’etat under the guise of impeachment, the judicial persecution of Lula in 2018 that successfully kept him off the ballot (and allowed Bolsonaro to become president), the assassination of Rio city council member Marielle Franco, numerous extrajudicial killings by police, politically motivated murders and other violence against Workers’ Party supporters, persecution of Brazil’s most prominent LGBT politician (which forced him into exile), Bolsonaro’s attacks on the integrity of the electoral system, and more.

Lula’s legacy was smeared, however, by false criminal charges of corruption pursued by a highly politicized investigation overseen by a prosecutor, Sérgio Moro, who ultimately succeeded in having Lula jailed in 2018 based on the testimony of a sole convict whose prison sentence was reduced in exchange for his testimony. With Lula thus prevented from running in the 2018 elections, Bolsonaro ended up winning, and appointed Moro minister of justice. Lula’s conviction was later annulled.

“Despite the violence leading up to election day, despite the misinformation, and despite the distrust in the integrity of the electoral authority pushed by Bolsonaro, it seems that democracy and the will of the voters prevailed,” CEPR Director of International Programs Alex Main, who is in Brazil as an election observer, said. “The mood is celebratory. Most Brazilians clearly want to leave the Bolsonaro era behind and return to the promise of the Lula years.”

“Lula’s election represents a real likelihood of a return to regional integration, especially via the Union of South American Nations, where Brazil acted as an important leader under its previous Workers’ Party governments,” CEPR senior policy analyst Guillaume Long, who recently coauthored a report on the prospects for relaunching UNASUR, said. “Brazil has much to gain from better economic, political, and cultural ties to its regional neighbors, and Lula has already suggested he may return Brazil to UNASUR were he to be elected.”