November 13, 2022 Alaina Demopoulos The Guardian
Printer friendly
HarperCollins Union Workers Go on Strike Over Pay ‘For As Long as It Takes’ Published November 13, 2022 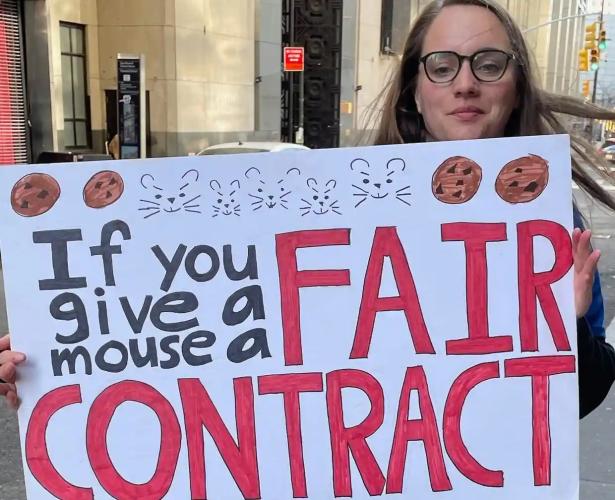 The strike was authorized by a vote of 95.1% last month. It comes after 11 months of negotiations with HarperCollins management over a new contract, and a one-day strike.,Photograph: Stephanie Guerdan

Stephanie Guerdan started working in the children’s book department of HarperCollins Publishers six years ago. It was a dream job – just not a dream paycheck. The $33,500-a-year (£28,750) salary was well below a livable wage in New York City, but Guerdan didn’t ask for more. “I was terrified that I was not going to get that job if I negotiated,” they said. “Publishing is very much an industry where they tell you, ‘If you don’t want this, there are 500 people in line behind you who do.’”

Publishing has for decades has been known for its low pay and overwhelmingly white staff. But workers at HarperCollins, the only member of the “big four” publishing houses to have a union, have had enough and authorized an indefinite strike. Work stopped at the downtown Manhattan offices on the sunny morning of 10 November. Employees like Guerdan, who is a shop steward at the union, spilled on to the streets to picket.

“We want to create a workplace that is more financially sustainable for employees and accessible to people from a variety of backgrounds,” said Olga Brudastova, president of Local 2110 United Auto Workers, the union that HarperCollins workers are part of.

More than 250 HarperCollins employees are unionized, including workers in the editorial, sales, publicity, design, legal and marketing departments. The strike was authorized by a vote of 95.1% last month. It comes after 11 months of negotiations with HarperCollins management over a new contract, and a one-day strike that occurred on 20 July.

According to the union, the average salary at the company is $55,000 annually, and the majority of employees are women. HarperCollins, which is owned by Rupert Murdoch’s NewsCorp, reported record profits in 2021.

“We’re willing to stay out as long as it takes,” Guerdan said. “After about a week, the company is really going to feel the loss of all our essential labor. I’ve talked to friends who are not in the union, and their assessment of it has been, ‘I don’t think the company knows what’s going to hit them.’”

The HarperCollins strike follows a national surge in support for labor unions, which at 71% is the highest it’s been since 1965.

In a statement, a spokesperson for the company said: “HarperCollins has agreed to a number of proposals that the United Auto Workers Union is seeking to include in a new contract. We are disappointed an agreement has not been reached and will continue to negotiate in good faith.” 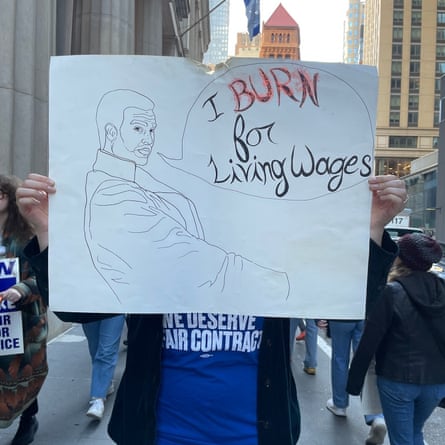 The HarperCollins strike follows a national surge in support for labor unions, which at 71% is the highest it’s been since 1965. Photograph: Stephanie Guerdan

Authors published by the firm showed their support for the strike on Twitter. “Unlivable wages and untenable conditions result in burnout and turnover,” wrote romance author Allie Therin. “I support fair contracts for workers.” The artist and graphic novelist Bree Paulsen tweeted: “@hcpunion has my full support.”

Laura Harshberger, senior production editor at HarperCollins Children’s Books and the union’s unit chair, said she was only able to afford working in the publishing industry though her 20s by living with her parents and working retail on the side. “I would average five to 10 hours a week freelancing, which helped compensate for the fact that my day job did not pay me enough to live on,” she said.

Harshberger met her partner working in publishing. When her partner left the industry, she immediately made double the salary. “I can keep working in publishing right now because of her,” Harshberger said. “That doesn’t feel great. That’s the privilege side of it: it shouldn’t only be the people who have wealthy partners or parents who can stay in the industry. When you’re not paying people fairly, that narrows the perspective of who’s making decisions about what books we publish. Readers lose out in that, and so does the company.”

Staffers on the picket line said they were both nervous and anxious. They led chants and encouraged passing drivers to honk their horns in support. Some carried protest signs poking fun at their more famous titles, like a Maurice Sendak-inspired “Where The Wild Things Are Underpaid” banner, and one, riffing on the children’s book written by Laura Numeroff, that read: “If you give a mouse a fair contract.”

Workers got together to make the signs during a brainstorm session in Brooklyn’s Prospect Park. “What we’re doing is challenging and very scary, but when we all come together, we end up feeling better about it,” Harshberger said. “We feed off of each other’s energies, we’re all smart, talented people, so you see it sometimes reflected in our signs.”