The measure in last week’s election was closely watched in Illinois and beyond as a gauge of public support for the labor movement, which has lost ground for years in conservative-led states. 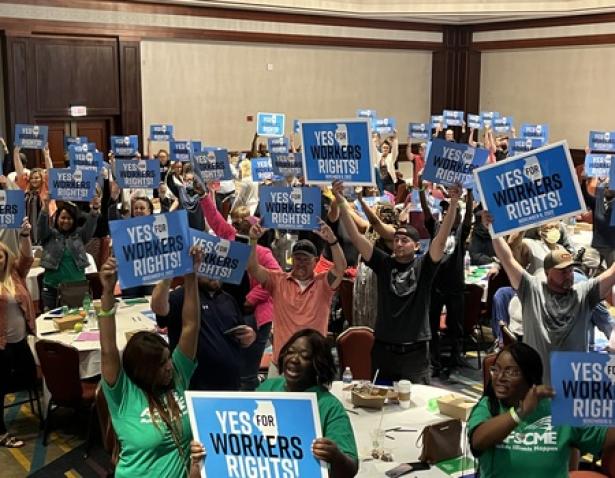 American Federation of Federal, State and County Employees Council 31 members rally for a successful ballot measure that will enshrine collective bargaining in the state constitution.,AFSCME Council 31

Illinois voters have approved an amendment to their state constitution guaranteeing the right to bargain collectively.

The measure in last week’s election was closely watched in Illinois and beyond as a gauge of public support for the labor movement, which has lost ground for years in conservative-led states. Unions groups say it could signal a new chapter in the struggle over workers’ rights as U.S. union ranks have grown as everyone from coffee shop baristas to warehouse workersseeks to organize.

They view it as a way to ensure workers will always be able to use their collective clout to secure better pay, hours and working conditions. They also say it will prevent the Legislature, should it undergo a shift to the right, from passing a so-called right-to-work law that would allow workers covered by union contracts to not pay dues.

“Being able to protect everyone’s ability to step up and organize their workplace is a critical component to making sure everyone has access to some higher paying jobs and safer workplaces,” said Joe Bowen, spokesman for the Vote Yes for Workers’ Rights group. “Specifically, you’ve certainly seen a lot of abuses — Starbucks baristas or folks who might work at Amazon warehouses. But these historical examples have existed for generations and it’s really important that we do what we can to secure these rights for Illinoisans.”

Business groups and conservatives opposed the measure, saying they think it will drive up taxes, give unions too much power, lead to more strikes and prompt companies to leave for more industry-friendly states.

Union rights have taken a beating in Republican-led states in recent years. Twenty-seven states now have right-to-work laws, and Wisconsin went so far as to strip nearly all of its public workers, including teachers, of collective bargaining rights.

Tennessee voters last week approved a change to the state Constitution that reinforces the state’s existing law freeing workers from being required to pay union dues.