Democrats Were Dithering on Railworkers’ Rights. The Left Just Forced Their Hand.

Democrats were ready to throw railworkers to the wolves, letting even Republicans outflank them on labor rights. But thanks to a last-minute legislative push by Bernie Sanders and his allies today, railworkers may be getting the sick leave they’re demanding. 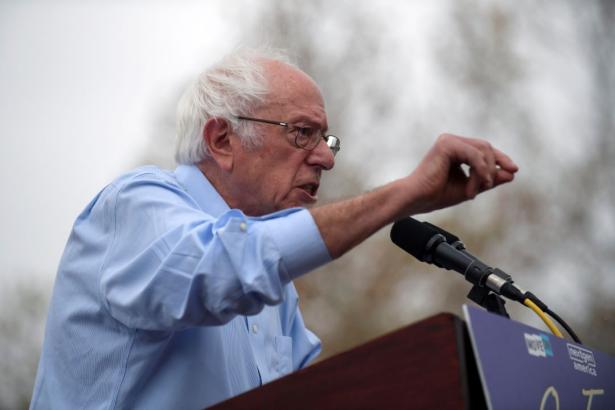 Senator Bernie Sanders has refused to impose a deal on railworkers that doesn’t include their demand for seven days of paid sick leave., (Jeff Swensen / Getty Images)

With the baby steps the Democratic Party’s taken toward a more economically progressive, pro-working-class politics over the last two years, it shouldn’t be forgotten that this is still a corrupt, out-of-touch party divorced from any such tradition. And with his loss in the 2020 Democratic primary, it’s easy to forget the value of Bernie Sanders’s continuing presence in American political life, especially the US Senate.

Yet the events of the past twenty-four hours should serve as reminders of both.

For the past week or so, Congress has been consumed by the prospect of a looming and potentially monumentally disruptive strike by railworkers, who have spent three years negotiating with rail carriers for a better contract, centered on their lack of rights to take paid time off work if they fall ill. After four unions representing more than half of the unionized rail workforce rejected a deal put together by President Joe Biden’s White House and a panel of experts that didn’t do enough to fix these grievances, labor secretary Marty Walsh and, eventually, congressional leaders themselves pushed for congressional intervention to end the stalemate, effectively by forcing railworkers to accept the deal anyway ― in the process, stripping the workers of leverage in negotiations. The whole episode came to a head yesterday.

In a statement on Monday calling for Congress to end the impasse, Biden ― the self-proclaimed “most pro-union president leading the most pro-union administration in American history” ― misleadingly hailed the White House–brokered deal that cut the legs out from under railworkers as a grand victory agreed to “by both sides.”

Casting himself as a “proud pro-labor president,” he stressed the potential economic downsides of a rail strike to explain why he was reluctantly overriding “the views of those who voted against the agreement” ― meaning, striking railworkers ― and rejected letting Congress modify the deal for workers’ sake, claiming “any changes would risk delay and a debilitating shutdown,” even though unions set the strike deadline for December 9, nearly two weeks after he put out the statement. Ironically, the president has ended up to the right of where he was in the 1990s, when the then senator Biden was arguably at the terrible peak of his neoliberal transformation yet nonetheless voted against letting Congress end a major rail strike. Railworkers have understandably savaged Biden, while big business groups have sung his praises.

Outgoing House Speaker Nancy Pelosi put out a similarly tone-deaf statement, patting Biden and his labor secretary on the back as “proudly pro-union” while hailing the contract they were forcing on railworkers as having “secured important advances for workers.” Pelosi lamely added some condemnation of railroad companies’ “obscene profits” for good measure, even as she made clear she was intervening firmly on the side of helping the carriers maintain those profits.

This was more or less the position of other prominent Democrats: expressions of regret and even condemnations of corporate greed meant to mask the fact that they were intervening on the side of the corporate profiteers. The House’s number two Democrat, Steny Hoyer, insisted he was “sympathetic to the issue of sick leave” and thought “the labor unions make a very valid case” as he lined up behind the White House. Even otherwise pro-worker Democrats like Elizabeth Warren, Sherrod Brown, and Kirsten Gillibrand ― who had rebranded herself as a progressive in order to run for president in 2020 ― borrowed from this playbook as they made clear they would go along with Biden’s plan. Transportation secretary Pete Buttigieg, meanwhile, didn’t even bother with this formality, simply saying it was “vitally important” for the thing to pass due to the “devastating impacts on our economy.”

A more common response was to do as the number three House Democrat, Representative Jim Clyburn, did and simply ignore the matter entirely. By yesterday late afternoon, prominent Democrats like Cory Booker, Ed Markey, and ex–presidential candidate Amy Klobuchar ― who had seen fit to tweet that afternoon about the United States winning its soccer World Cup match and an elderly retiree hiking the Appalachian trail ― hadn’t said a single thing either way. The ranks of Democrats staying silent on the situation unfortunately included a number of high-profile progressives, including “Squad” members Ilhan Omar and Ayanna Pressley, and Illinois progressive Chuy García.

The political malpractice on display here became clear when several Republicans used it as an opening to posture as pro-worker. Ted Cruz called railworker demands for sick leave “quite reasonable,” while, more significant, Marco Rubio put out a subtly union-bashing statement calling for both sides to “go back and negotiate a deal that the workers, not just the union bosses, will accept” and affirming he would “not vote to impose a deal that doesn’t have the support of the rail workers.”

Likewise, Josh Hawley, who has moved to brand himself as a pro-worker populist in advance of a planned 2024 run, stated that workers “said no and then Congress is gonna force it down their throats at the behest of this administration.” Even Colorado Democrat John Hickenlooper, hardly a progressive firebrand, saw which way the wind was blowing and affirmed that “any bill should include the SEVEN days of sick leave rail workers have asked for.”

In other words, several Republicans and a guy who drank fracking fluid were to the left of the “most pro-union president” in history.

This abysmal state of affairs was injected with a modicum of hope thanks to the small but significant presence of left-wing lawmakers in Congress, whose pushback against the Democratic leadership’s move was led by Sanders in the Senate.

Sanders had made clear for months he would back whatever decision railworkers made and had criticized billionaire Warren Buffet ― who owns the parent company of BNSF Railway ― earlier this week, pointing out that “in one day, Mr. Buffett made twice as much money as it would cost to guarantee fifteen paid sick days a year to every rail worker in America.” More important, while Democrats got in line behind the president and party leadership, Sanders ― who had withheld his support for the president’s agreement for months and blocked Republicans’ earlier attempts to ram the inadequate deal through ― criticized the plans and made clear he’d block any such legislation until seven paid sick days for railworkers were included.

He was joined by a number of other left-wing lawmakers, like “Squad” member Jamaal Bowman, who called it “an inhumane deal being pushed onto workers even after a majority voted it down.” Fellow “Squad” members Alexandria Ocasio-Cortez (“If Congress intervenes, it should be to have workers’ backs and secure their demands in legislation”), Rashida Tlaib (“I stand with rail workers”), and Cori Bush (“I will not support a deal that does not provide our rail workers with the paid sick leave they need and deserve”) also took the side of workers.

Before long, Sanders made plans to introduce an amendment in the Senate to the legislation mandating seven days’ worth of sick leave for the railworkers, joined by Bowman doing the same in the House, daring Republicans to vote against it. “Look, you have a number of Republicans who claim — claim — to be supporters of the working class,” Sanders told Chris Hayes last night. “Well, if you are a supporter of the working class, how are you going to vote against the proposal which provides guaranteed paid sick leave to workers who have none right now?”

These efforts rapidly rearranged the political terrain, with Pelosi suddenly and subtly shifting her position late in the day and announcing plans to allow lawmakers to vote today to add the seven days of paid sick leave to the agreement. Previously silent lawmakers like García expressed support for the move. It all culminated in the House passing the seven-day sick leave amendment just now by a vote of 221-207, with all Democrats and only three Republicans voting in favor.

Despite the dearth of House GOP support for the measure, Republican senator John Cornyn had earlier predicted it could get the required GOP support needed to reach sixty votes in the Senate, because “there will be a lot of sympathy for providing sick leave for workers.” In many ways, this is something of a repeat of events at the close of 2020, when Sanders and other progressives in Congress, with the belated aid of Hawley, forced the foot-dragging then-president Donald Trump, president-elect Biden, and Democratic leadership to all reluctantly back another round of stimulus checks. But whether progressives will succeed here is an open question and one that’ll largely depend on how many Republicans see it in their political interest, as they did when they just voted to legalize marriage equality, to move to the center, away from their long-standing hostility to workers’ rights.

Whatever happens, this has been another sign of the modest but significant political shift that’s taken place in US political life thanks to both the larger prominence of Sanders and his progressive allies in Congress, and the resurgence of labor militancy and an organized socialist movement in recent years. Forty years ago, a Republican president dealt a terrible blow to the union movement by breaking an air traffic controllers’ strike. Decades later, Republicans may force a Democratic administration into a more pro-worker position by following the lead of an openly socialist senator.