labor The Autoworker Who Transformed California

Paul Schrade, 1924 - 2022, devoted his life to building an America and a California that enjoyed broadly shared prosperity and racial egalitarianism. It’s that for which he should be remembered. 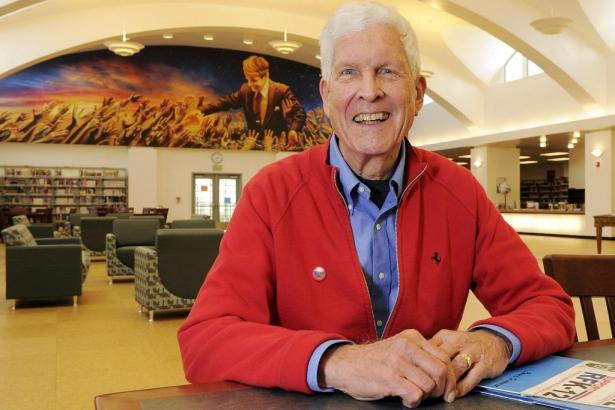 Paul Schrade poses in the Paul Schrade Library at Robert F. Kennedy Community Schools, May 20, 2011, which is built on the former site of the Ambassador Hotel in Los Angeles.,Mark J. Terrill/AP Photo

When former United Auto Workers leader Paul Schrade died at 97 earlier this month, obituaries highlighted the evening when he became part of a news flash that rocked the nation and the world: the 1968 assassination, in Los Angeles’s Ambassador Hotel, of senator and presidential candidate Robert Kennedy. Schrade, one of Kennedy’s most important supporters, was also wounded and nearly killed.

But Schrade was notable, and should be much more notable, not just for what happened to him that night, but for what he did over the course of decades to transform California—transformations that included helping foster the state’s three-decade postwar boom and reconfiguring its politics as well.

In 1948, Schrade dropped out of Yale to visit California and then take a job at North American Aviation in Inglewood, a giant airframe factory then gearing up for Cold War military production. By 1951, he was president of UAW Local 887, which represented several thousand employees at the plant. Employers in Southern California’s burgeoning aerospace industry were determined to keep wages well below those won by the big industrial unions back East. Like Amazon and Tesla today, the aircraft companies sought to combine the most advanced technologies with an authoritarian and underpaid work regime.

In 1953, Schrade led a bitter 53-day strike at North American. After executives hired strike-breakers and the courts enjoined mass picketing, the walkout ended in defeat. But the militancy demonstrated by the strikers soon persuaded Southern California aircraft employers, as well as the U.S. government (the chief customer for all that military hardware), that wages had to rise in what was by then the largest and most important Southland industry. (Until the Cold War ended in the early 1990s, Southern California’s aerospace giants were the state’s largest private-sector employers.) California’s storied prosperity during the mid-20th century had many sources, but the working-class mobilization led by Schrade was surely one of them.

In the late 1950s, Walter Reuther, the UAW’s legendary president, recruited Schrade to work as one of his assistants at the union’s Detroit headquarters. There, Schrade became a forceful opponent of the anti-Communist proscriptions enforced by the UAW and other unions during the Cold War. His commitment to civil liberties would grow even stronger when in 1962 he returned to California as director of the UAW’s 90,000-strong West Coast Region.

Though a generation older than the student radicals of the 1960s, Schrade thought of himself as a New Leftist. He supported the Free Speech Movement at Berkeley in 1964, and by 1965 was increasingly opposed to the Vietnam War, a stance at variance with that of the UAW, which remained committed to Lyndon Johnson’s presidency. Schrade was also instrumental in bringing national attention to the farmworker movement led by Caesar Chavez. Well before Chavez became well known, Schrade visited Delano to assess the strength of the union effort there. His enthusiastic endorsement convinced both Walter Reuther and Robert Kennedy to back the movement with their high-profile influence.

In the wake of the 1965 Watts uprising, Schrade also committed the UAW’s resources to founding and funding two landmark community-based organizations in L.A.’s minority communities: the Watts Labor Community Action Council and the East Los Angeles Community Union. The latter, which came to be called TELACU, became the first Latino powerhouse in L.A. and California politics, fostering the rise of the first generation of prominent Latino elected officials, including Art Torres and Richard Alatorre, who became leading figures in the state legislature.

When Kennedy announced his candidacy for president in March 1968, Schrade was determined to carry the senator’s banner in California by putting together a powerful primary slate that extended from Chavez on the left to Jesse Unruh’s Democratic Party regulars on the right. But a fight of almost equal importance was taking place within the UAW leadership, where Reuther, who commanded an organization decisive to the politics of half a dozen Midwestern states, still backed LBJ. At a crucial UAW Board executive meeting, Schrade persuaded his fellow members to override Reuther’s determination to keep the union pledged to Johnson, thereby liberating the substantial anti-war forces within the union to join Kennedy’s campaign. LBJ’s decision, 12 days later, not to seek another term was certainly influenced by the UAW’s de facto repudiation of his presidency.

Schrade’s activism cost him heavily. Some UAW shop leaders in California looked askance at his left-liberal commitments. Leonard Woodcock, who became UAW president after Reuther was killed in a 1970 plane crash, saw Schrade as a potentially dangerous opponent. Schrade lost his UAW post in a 1972 election, thereafter returning to the shop floor at North American Rockwell, where he worked until his retirement.

During that retirement, Schrade headed up the Southern California ACLU’s Worker Rights Committee, and—a man of many talents—became an expert in Italian bread baking, an expertise he used to home test recipes for his friends at the La Brea Bakeries. He also successfully advocated for turning the long-abandoned Ambassador Hotel into a sorely needed inner-city high school named after Robert Kennedy, defeating rival high-dollar proposals from a host of developers, including a New York interloper named Donald Trump.

Paul Schrade devoted his life to building an America and a California that enjoyed broadly shared prosperity and racial egalitarianism. It’s that for which he should be remembered.

Nelson Lichtenstein, who teaches history at the University of California, Santa Barbara, is writing a history of economic policy during the era of Bill Clinton’s presidency.

American Prospect, Inc., is a 501(c)(3) nonprofit corporation headquartered in Washington, D.C.  You can support our mission with a subscription or a tax-deductible donation.  DONATE TODAY