A New Union Rises in the South 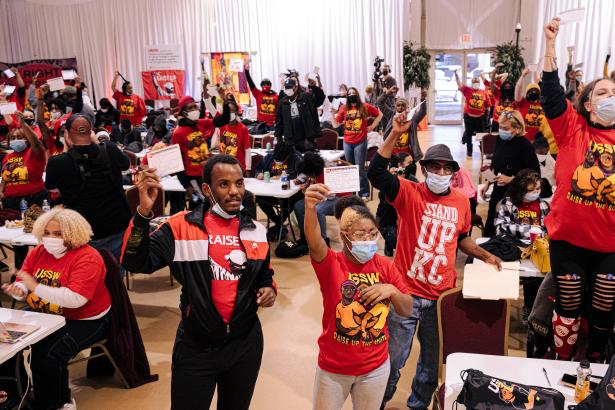 Naomi Harris, 21, and Brandon Beachum, 35, are founding members of the newly established Union of Southern Service Workers (USSW), who gathered in Columbia, South Carolina, on Nov. 17 for a three-day summit to launch their effort. They were joined by hundreds of service workers from throughout the South who work in home care, retail, restaurants, fast food and warehouses. They promised to use “any means necessary” to obtain fair pay, health and safety protections, equal treatment and fair and consistent work scheduling for the hundreds of thousands of workers in the Southern service industry.

Inspired by the Fight for $15 movement to raise minimum wage laws and improve working conditions, they will forgo using the cumbersome and deeply flawed National Labor Relations Board union election process to obtain their goals. Direct action and collective power are key to their approach.

Of the 10 states with the lowest union membership, seven are located in the South. In South Carolina where Harris lives, only 1.7% of wage and salary workers are members of unions. In Georgia where Beachum works, 4.8% of workers are in unions. It is not surprising that the South has the lowest minimum wages, $7.25 an hour, of any region in the country.

The USSW was founded as an intentionally multiracial movement, focused on breaking through the historical currents of white oligarchical business and political domination that stymied prior unionization efforts.

Note: These interviews have been edited for clarity and brevity.

Capital & Main: Tell me about your experiences at work and why you joined this effort to unionize.

Brandon Beachum: I work at Panera, which is a chain restaurant, and the wages are just criminally low. I make $16 an hour, and I still live with my parents because I would barely be able to scrape by if I didn’t. Most of us have to have second jobs. There are people who have been working there for eight years who make less than I do, and they have kids and families. It seems like once a week one of my co-workers comes in limping because they’ve been on their feet 60 or 70 hours a week from the two jobs they have to work to make ends meet. I’ve asked for a raise but been shot down. Negotiating with a boss one-on-one has no impact. We have to bargain together as workers without bosses telling us what they think we need.

Naomi Harris: I haven’t started my new job yet at Quaker Steak and Lube, which is a car- themed restaurant. I will be making about $2.13 an hour because here in South Carolina they say service workers or tipped workers don’t need a high minimum wage because we are getting money from customers. But if you are working on Monday through Wednesday when people aren’t going out to dinner you don’t make much. But at the pizza restaurant where I worked before, I went on strike twice over health and safety issues and discrimination. And we won our demands.

Like many of these chains, Panera is a corporation disguised as a mom-and-pop operation. What do you know about that chain of restaurants?

Brandon Beachum: Panera is a $5.6 billion company, so it’s not a mom-and-pop operation. I’ve been told the owner of the store I work at is worth $600 million. They try to cultivate a homey vibe where you have to smile from ear to ear when a customer walks in the door. It’s grating on your psyche. 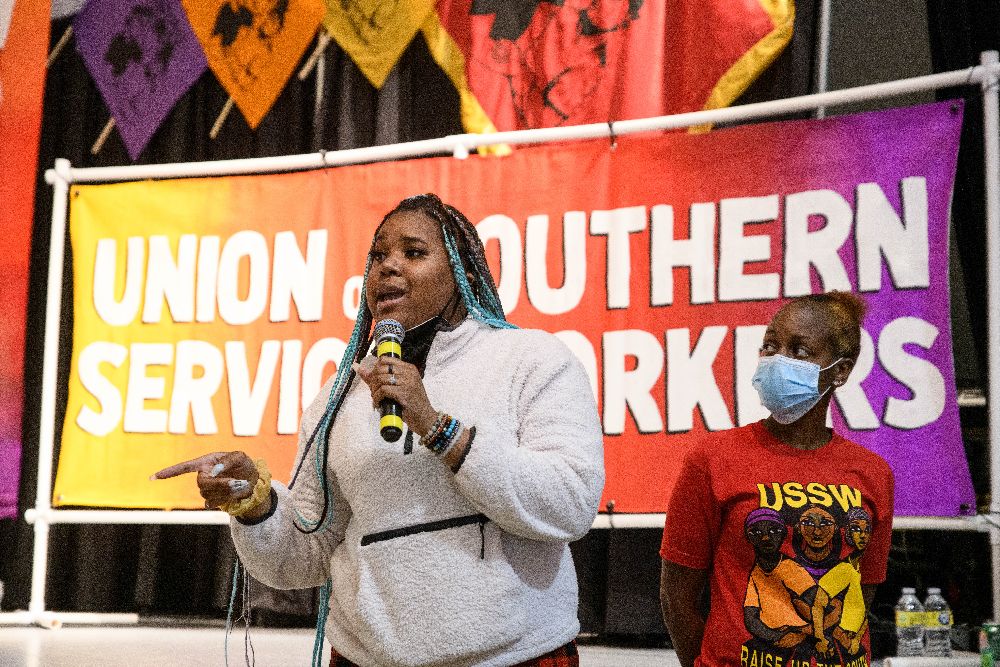 You have just had a founding convention of the Union of Southern Service Workers (USSW) in Columbia, South Carolina. Tell me what it was like to join with workers from all over the South who are part of this new movement.

Naomi Harris: Oh, my goodness, there was so much power in that building over the weekend. It was inspirational, and I learned so much from other workers. When I spoke from the stage, I told the audience that we will fight by any means necessary. We will not stop until the fight is done and we will fight as long as there is injustice in the workplace and in our communities. I felt like everyone in the room was part of the same family and we are going to look out for one another.

Brandon Beachum: The South has been in the leadership position of social movements many times in our history. With service workers there has been a heightened level of exploitation going on, which is considerably worse in the South with right-to-work laws and other union busting tactics. I felt at the convention that we are not just starting a normal union. We have a community union model where we are fighting not just for ourselves but for families and young people and communities.

It sounds like you are learning about American history and labor history as part of this movement.

Brandon Beachum: Yes. To be blunt about it, we’re still overcoming the problems of slavery and Jim Crow, and how Reconstruction after the Civil War was basically destroyed. The New Deal created union protections but left out farmworkers, tipped workers, domestic workers. You have a lot of people without degrees, like myself, who are basically behind the rest of the country and have been for decades on this in the south. So, this is historically significant.

Naomi Harris: When I look back on the Civil Rights movement, they were sprayed with fire hoses, they were tear gassed, they were thrown in jail, but they never missed a beat — they just kept fighting. That’s what we are going to do. 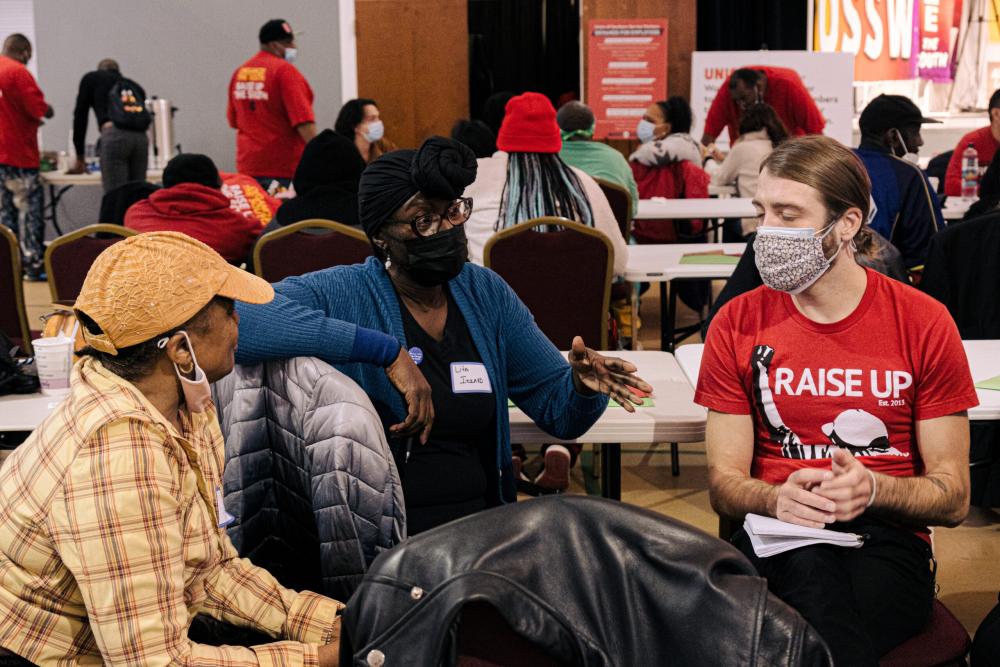 At your convention a number of speakers stated that the organizing efforts would be carried out “by any means necessary.” What are the tactics and strategies that you employ?

Naomi Harris: We are going to fight by marching up on the bosses with our petitions, striking at the right time, getting community support for rallies. We will organize walk outs, sit-ins and boycotts if we need to. We will take legal action against wage theft, because you’re not about to pay me less than I deserve and take money out of my tips at the same time. We’re going to fight and fight and fight until we get what we deserve.

Employers have notoriously attempted to pit white workers and African American workers against each other to prevent them from joining together to unionize. Do you anticipate that happening and how are you guarding against that employer tactic?

Naomi Harris: One of the rules that we have for our union is that this is an anti-racism union. We will not allow any type of racism because we are a family, and we know that major corporations have used racism to keep our workers apart so that we can’t come together to build unions. We know we are all getting left out to dry by our bosses so we have to come together and realize that the fight is not between each other. We’re fighting the major corporations. I talk to everyone in my workplace regardless of color and so far no one has given me any problem because of my skin color. Most of them sign up for what we are doing. We have to talk to each other and support each other when the bosses try to keep us separated.

Neither of you seems to have any fear as you move forward. Where does that courage come from?

Brandon Beachum: Basically, I have nothing to lose. If I quit Panera and go somewhere else, it’s going to be the same problems. It’s obvious to me that there is no social mobility here. There is nothing to be gained by being afraid because the bosses will take advantage of you every single time. I saw at our convention so many people showing up who are ready to fight. I know I’m not alone, and we outnumber the bosses. Union activity is more than we’ve seen in decades. So, all we have to do is right there for the taking. We just have to grab it.

Naomi Harris: Life’s too short to be afraid. I don’t have time to be afraid. If you’re fearful you won’t get to where you need to go because you will always be scared to take that chance. I want to be in an America where everybody loves one another and where no one is discriminated against. Joining the union, I took a chance even knowing that some people would probably not want to hire me. And I’ve had nothing but blessings since I joined and I wouldn’t change it for the world.

Capital & Main is an award-winning nonprofit publication that reports on the most pressing economic, environmental and social issues of our time. Winner of the Online Journalist of the Year and Best News Website Exclusive to the Internet prizes at the 2020 Southern California Journalism Awards, Capital & Main has had stories co-published in more than 30 media outlets, from USA Today, Newsweek, The Guardian and Fast Company to The American Prospect, Grist, Slate and the Daily Beast.

Donate to Capital and Main