What was unusual on Monday is that the full impact of Hamlin's injury was on display in the middle of the field during a primetime matchup. Typically, players who suffer injuries are rushed off the field so the game can resume as quickly as possible. This mentality — "next man up" — is glorified in NFL culture. 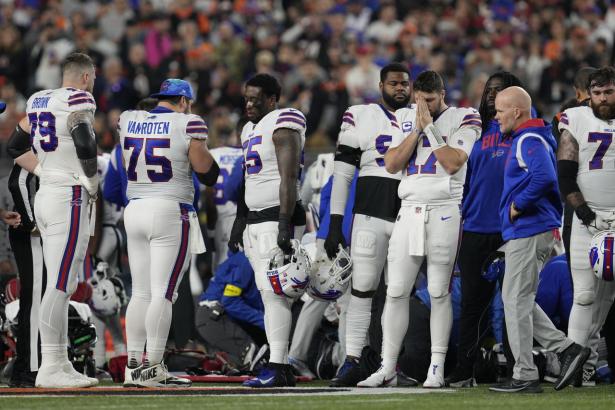 Buffalo Bills quarterback Josh Allen (17) pauses as Damar Hamlin is examined during the first half of an NFL football game against the Cincinnati Bengals, Monday, Jan. 2, 2023, in Cincinnati., (AP Photo/Jeff Dean)

On Monday night, Buffalo Bills safety Damar Hamlin tackled Cincinnati Bengals wide receiver Tee Higgins. It seemed, at first, to be a violent but routine NFL play. Higgins hit Hamlin's chest with his shoulder during the tackle, but Hamlin quickly rose to his feet.

A few seconds later, however, Hamlin abruptly collapsed on the turf.

Hamlin lay on the field, motionless, for ten minutes as medical personnel administered CPR. Players from both teams kneeled, some with tears streaming down their faces, while Hamlin was placed on a stretcher and taken to the University of Cincinnati Medical Center in an ambulance. As of Tuesday, Hamlin remains hospitalized in critical condition.

The fact that an NFL player suffered a severe injury during a game is not unusual. Among major sports, NFL football is by far the most dangerous. A Harvard study published in May 2017 found that "mean number of injuries suffered per game in the NFL is approximately 3.4 times higher than the combined rates of MLB, the NBA, NHL, and [the Union of European Football Associations] combined." Concussions also occur during NFL games at much higher rates.

The real consequences of all these injuries are often opaque to fans. Chronic traumatic encephalopathy (CTE), for example, is a "degenerative brain disease associated with repeated blows to the head." One study of former NFL players' brains found 99% had diagnostic signs of CTE. Symptoms of CTE include "depression, apathy, anxiety, explosive rages, episodic memory loss, and problems with attention and higher order thinking." But these symptoms do not fully emerge until after the player retires.

What was unusual on Monday is that the full impact of Hamlin's injury was on display in the middle of the field during a primetime matchup. Typically, players who suffer injuries are rushed off the field so the game can resume as quickly as possible. This mentality — "next man up" — is glorified in NFL culture.

Joe Buck stated it on-air as fact four separate times so figuring out who is lying should be pretty straightforward.

NFL EVP Troy Vincent says the NFL never informed the teams they had five minutes to warm up to resume play. That never crossed their minds and he doesn't know where that came from.6:13 AM ∙ Jan 3, 2023

Many coaches and players, however, appeared to resist efforts to restart the game. Ultimately, about an hour after Hamlin's injury, the contest was formally suspended by the NFL. In a Monday night conference call, NFL VP of football operations Troy Vincent insisted the league never considered resuming play. "It never crossed our mind to talk about warming up to resume play. That’s ridiculous. That’s insensitive," Vincent said. ESPN said that it was in "constant communication" with the NFL, and Buck "reported what we were told in the moment."

Professional football, which features athletes repeatedly crashing into each other for hours, will never be safe. But Hamlin's catastrophic injury has put a spotlight on how NFL rules and customs put players at even greater risk.

The NFL generates over $17 billion in revenue annually, far exceeding other major sports leagues like MLB ($10 billion) and the NBA ($8 billion). The NFL's enormous cash haul is made possible entirely by the players, who risk their lives to create a spectacle beloved by fans.

But, with a few exceptions, NFL players, unlike other major sports leagues, do not have guaranteed contracts. That means the players, not the team, carry the financial risk of serious injury. Outside linebacker Ja'Wuan James, for example, signed a four-year $51 million contract with the Denver Broncos in 2019. On May 4, 2021, James tore his Achilles tendon while training. Ten days later, the Broncos released him, voiding the remainder of his contract. James then signed a two-year $4.5 million contract with the Baltimore Ravens. But James tore his Achilles again in the opening game of the 2022 season.

The lack of contract guarantees in the NFL incentivizes players to play injured. If a player isn't consistently available, the team can release him and suffer no financial penalty. This pressure is particularly acute since the average length of an NFL career is just three seasons. According to the NFL Players Association, three-quarters of players are broke three years after retirement.

But these guaranteed deals have been the exception. Yes, there are many more players on a football team than on a basketball team, giving each player somewhat less negotiating leverage. But why aren't most top NFL players, who have multiple teams competing for their services, able to negotiate guaranteed deals?

The NFL Players Association alleges "that teams and the league have colluded to prevent clubs from offering players fully guaranteed contracts." According to the complaint, which was summarized in a leaked league memo, “NFL owners and/or League executives discussed not agreeing to any additional player contracts with fully-guaranteed salaries" during an August 9 meeting. The NFL denies the allegation.

While providing guaranteed contracts may result in NFL owners making slightly less money, it could also make the game safer. Players would no longer have to choose between taking care of their physical health and their financial future.

The NFL has recognized the sport is too dangerous and, since 2002, "has made over 50 rules changes intended to eliminate potentially dangerous tactics and reduce the risk of injuries."

Many of these rule changes are highly technical, seeking to protect players without any noticeable impact on the game. A 2015 rule change, for example, prohibits offensive backs "from chopping a defensive player engaged above the waist by another offensive player outside the tackle box." A 2006 rule change prohibits "low hits on the quarterback… when a rushing defender has an opportunity to avoid such contact."

A 2020 study examining rule change over the previous 10 years, however, found that "new, well-intentioned rules adopted every season by the NFL have been proven to be too weak to make the NFL game safer." Despite the rule changes, the "number of major injuries to the leg, back, arm and head" to NFL players did not meaningfully decline.

The authors of the study called for more robust protections for players, including "prophylactically resting" players who receive "multiple subconcussive hits" but are not yet clinically concussed.

Judd Legum is founder and author of Popular Information, an independent newsletter dedicated to accountability journalism. You can reach him at judd@popular.info.