Will Biden Save Israel From Its Worst Instincts?

The U.S. has only days to act before Netanyahu destroys the Israeli High Court. 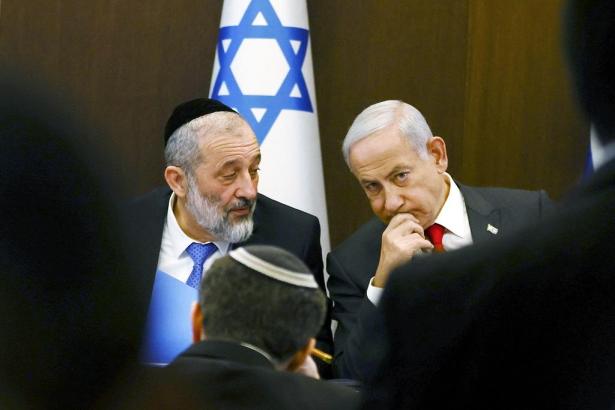 Yesterday, Harvard reversed itself and reinstated a human rights fellowship for former Human Rights Watch director Kenneth Roth. The dean of the Kennedy School, Doug Elmendorf, had previously vetoed the offer to Roth, claiming that some of the group’s statements were antisemitic. An uproar followed, and Elmendorf issued a groveling and disingenuous apology.

This came just a few hours after the Israeli High Court of Justice ruled that Aryeh Deri, leader of the ultra-Orthodox Shas party, could not serve in the Cabinet because of his past criminal activity. Deri is one of the most extreme figures in Benjamin Netanyahu’s government, with two Cabinet posts and the added title of deputy prime minister.

Even before that ruling, the new government was laying plans to strip the court’s power to protect rights, via a law that would allow all High Court rulings to be overturned by a simple majority in parliament. The Israeli press has speculated that the Deri ruling was the Court’s way of calling the question before Netanyahu could move first.

And by no small coincidence, U.S. National Security Adviser Jake Sullivan was in Jerusalem this week conferring with top officials. The three events are of course connected. What connects them is the parlous future of Israeli democracy—and what the Biden administration will do to preserve what remains of it.

Harvard tried to cancel Roth because Human Rights Watch, which reports on rights violations worldwide, refused to cut Israel any special slack. A 2021 report by the group described Israel’s system as apartheid and provided ample documentation. The pro-Israel lobby went ballistic, condemned the report as antisemitic, and then sought to block Roth’s Harvard appointment.

If Netanyahu prevails in his plan to neuter the Israeli High Court, he will be free to make Israel that much more of an apartheid state and that much less of a democracy.

At this writing, the Netanyahu coalition was considering whether to obey the court and oust Deri from the Cabinet, or to accelerate the attack on the court and defy its order.

Israel does not have a written constitution or a bill of rights. What has kept it even a semi-democracy is that all parties have respected the independence of the courts. If that goes, democracy goes. A massive protest demonstration against weakening the judiciary is planned for tomorrow.

Netanyahu is counting on the Israel lobby to temper any strong U.S. reaction. But Netanyahu’s government represents a radical escalation of human rights violations that were already abhorrent. And the criticism from American Jews now goes well beyond reformist groups like J Street.

Abe Foxman, the retired longtime leader of the Anti-Defamation League, said last month, “If Israel ceases to be an open democracy, I won’t be able to support it.” He added in an interview with the Jewish Telegraphic Agency, “It’s not one thing. It’s a whole package of things, which is bringing us back to the Middle Ages.”

So, should friends of Zionism, as presently twisted, cancel Abe Foxman?

Because Israel has no constitution, no bill of rights, and no second parliamentary chamber, the High Court is the only check and balance in existence … These proposed changes are particularly egregious given that the current coalition is specifically attacking the rights of Reform Jews, members of the LGBTQ+ community, Arabs and Palestinian-Israelis, and other minorities.

Ultimately, only Joe Biden can rein in Netanyahu, and time is running out. The U.S. pours billions into Israel every year. He needs to bluntly warn Netanyahu: If you destroy the independence of Israel’s courts, U.S. aid is suspended.

Biden has been a pleasant surprise in many respects. But on Israel he has never showed much gumption. The construction of Donald Trump’s U.S. embassy in Jerusalem is proceeding. The U.S. ambassador to Israel, Tom Nides, is a traditionalist. The U.S. works with Israel on other pressing issues, such as Iran.

Can Biden please bring forth a miracle?

Robert Kuttner is co-founder and co-editor of The American Prospect, and professor at Brandeis University’s Heller School. His latest book is Going Big: FDR’s Legacy, Biden’s New Deal, and the Struggle to Save Democracy.

Founded by Robert Kuttner, Paul Starr, and Robert Reich, read the original 1989 prospectus for the magazine.

To learn more about our history, check out this 2015 piece by Starr and Kuttner, reflecting on 25 years of politics and change.

You can support our mission with a subscription or a tax-deductible donation.