The Left Was Missing in Action From the McCarthy Spectacle

Watching the GOP’s circular firing squad during the speaker votes was entertaining, but what do progressive Democrats have to show for rallying round their party’s leadership? 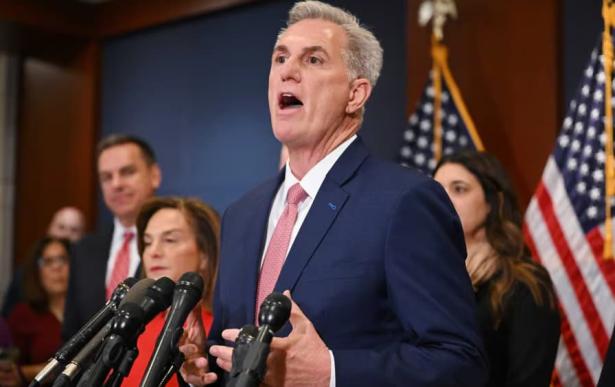 If you rely on the corporate media, the 15 ballots it took to elect Kevin McCarthy as speaker of the House might seem like a triumph for the Democratic Party, whose “quiet competence and unity,” NBC declared, “is a stark contrast not just to GOP fecklessness” but also to the usual media storyline of “Dems in disarray.” For once, Bloomberg approvingly, Democrats flexed their “unity muscles.”

Isn’t it pretty to think so? But while it’s true that Democrats stuck together to deliver 15 unanimous tallies for their candidate, minority leader Hakeem Jeffries, what have they got to show for it?

In exchange for his supposed public humiliation, Kevin McCarthy—a politician of no discernible principles beyond personal advancement—now sits second in line to the presidency. (Note to Biden: No more joint appearances with Kamala Harris.) True, his hold on the job may be somewhat tenuous, though former speaker John Boehner managed to do a lot of damage despite being similarly encumbered. More significantly, Republicans can now credibly force McCarthy to insist on cuts to Social Security and Medicare as part of any grand bargain on the budget (a degree of coercion akin to forcing Homer Simpson to swallow another doughnut). Meanwhile, Matt Gaetz and his insurrectionist co-conspirators have gained three seats on the House Rules Committee and instituted new rules stipulating that while spending increases must be offset by cuts, proposals to raise taxes will now require a three-fifths supermajority.

In the past, playing an inside game arguably made sense for progressives, who by (quietly) threatening to withhold their votes from Nancy Pelosi won key committee assignments, hearings on Medicare for All, and a seat at the budget table for caucus chair Pramila Jayapal—plus the biggest infrastructure bill in decades, the largest climate change bill ever, and, with the CHIPS Act, the beginnings of an industrial policy. Now all they have is a lot of love on social media for Hakeem Jeffries’s alphabetical oratory… and not much else.

Let us consider the disposition of forces after this recent ideological skirmish. On the far right: McCarthy, Steve Scalise, Richard Hudson, Gary Palmer, Elise Stefanik—all of whom voted against certifying the 2020 presidential election results and now hold leadership positions. On the far, far right: Gaetz and his fellow holdouts (outside the tent, but by no means far from the levers of power)—but also Jim Jordan and Marjorie Taylor Greene (now very much inside the tent). In the center, the Democrats led by Jeffries, who told The Atlantic, “There will never be a moment where I bend the knee to hard-left democratic socialism.” And the left? Missing in action.

No wonder the whole spectacle left Kshama Sawant fighting mad: Congressional progressives failed to stand up to the party establishment or, as she put it, “win ANY gains for working people.” The Seattle councilwoman isn’t the only one. Watching Ted Cruz and Josh Hawley side with Bernie Sanders over paid sick leave for rail workers—a measure that somehow failed to unify Senate Democrats or win the backing of the “most pro-union president” (or his transportation secretary)—was just the latest in a series of infuriating progressive fumbles. Back when Democrats had a majority in the House, the party still couldn’t secure student debt relief, voting rights, a federal guarantee for abortion rights, a public option on health care, or any federal response to the crisis in affordable housing or to Republican attacks on public education. “Organization not based on principle is meaningless,” observed Lenin, whose Republican disciples have just demonstrated that being in the minority—or even a minority of the minority—is no excuse for failure.

One small first step for progressives would be to demand party unity in defense of Ilhan Omar and other Democrats whom McCarthy has threatened to remove from House committees. Another would be to prohibit the DCCC, special interests like AIPAC, and outside dark money groups from interfering in Democratic primary races to derail progressive challengers.

Still, if congressional progressives want to be taken seriously as anything more than a cheering section, they’ll have to get organized enough to stop serving as a centrist doormat—and be willing to show much more principled defiance of the party leadership. Which might mean putting down the lyric sheet to “Kumbaya” and brushing up their Lenin.

D.D. Guttenplan is editor of The Nation. His books include American Radical: The Life and Times of I.F. Stone, The Nation: A Biography and The Next Republic: The Rise of a New Radical Majority.