NRA Defends Right to Own Politicians

“Politicians pose no danger to the public if used correctly,” says NRA spokesperson Wayne LaPierre, who claims to have over two hundred politicians in his personal collection. 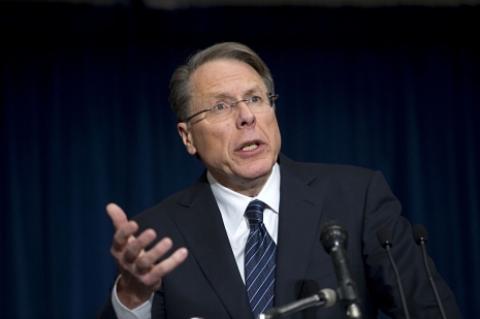 WASHINGTON (The Borowitz Report)—In testimony before the Senate Judiciary Committee today, National Rifle Association C.E.O. Wayne LaPierre warned that the N.R.A. would vigorously oppose any legislation that “limits the sale, purchase, or ownership of politicians.”
“Politicians pose no danger to the public if used correctly,” said Mr. LaPierre, who claims to have over two hundred politicians in his personal collection. “Everyone hears about the bad guys in Congress. Well, the only thing that stops a bad guy with a vote is a good guy with a vote. I’m proud to be the owner of many of those guys.”

Mr. LaPierre’s comments drew a sharp rebuke from Carol Foyler, a politician-control advocate who has spent the past twelve years lobbying for stricter limits on the sale of politicians.

“Right now, a man like Wayne LaPierre can walk right into Congress and buy any politician he wants,” she said. “There’s no background check, no waiting period. And so hundreds of politicians are falling into the hands of people who are unstable and, quite frankly, dangerous.”

In addition to limiting the sale of politicians, Ms. Foyler said, it is time for society to take a look at the “sheer number” of politicians in the U.S.: “There’s no doubt that we would be safer if there were fewer of them.”

For his part, the N.R.A. leader ended his testimony by serving notice that he would “resist any attempt” to take away the hundreds of elected officials he says are legally his.

As if to illustrate that point, he clutched Sen. Chuck Grassley (R-Iowa) close to his chest and bellowed, “From my cold, dead hands.”

Get the Borowitz Report delivered to your inbox.