Why, given the failure of austerity economics, haven't we seen a policy shift to stimulation of the economy?...the push for yet greater austerity has less to do with a deep concern by Europe’s elites over debt—it is high but manageable—than as part of a stealth campaign aimed at dismantling rules and regulations that protect worker rights, unions, and the environment. Meanwhile Washington is concerned with the effect of the economic crisis on the viability of NATO. 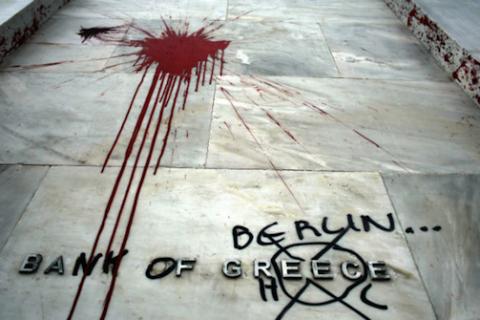 Back in the 1960s, the U.S. peace movement came up with a catchy phrase: "What if the schools got all the money they needed and the Navy had to hold a bake sale to buy an aircraft carrier?" Well, the Italian Navy has a line of clothing, and is taking a cut from a soft drink called "Forza Blu" in order to make up for budget cuts. It plans to market energy snacks and mineral water.

Things are a little rocky in Europe these days.

Unemployment is over 25 percent in Greece, Spain and Portugal--and far higher among young people in those countries--and most economies are dead in the water, if not shrinking. Relentless austerity policies have shredded Europe's traditional social compact with its citizens, fueled a wave of debt-related suicides in the continent's hard-hit south--Greek suicide rates jumped 37 percent from 2009 to 2011--and locked much of the continent into a seemingly endless spiral: austerity means layoffs, fewer jobs equal less revenue, lower revenues leads to more austerity=the classic debt trap.

"The economic situation in Europe is moving from bad to catastrophic," says Douglas McWilliams, chief executive for the Centre for Economic and Business Research. "There is a danger that economic problems will spill over into social breakdown."

So why hasn't the U.S. Treasury pressured lending agencies, like the International Monetary Fund (IMF) and the World Bank to shift from austerity formulas to stimulation policies? Why is the Obama administration pressing Europeans to increase military spending? And what should it matter to Washington if Britain remains in the European Union (EU)?

It is not just that Europe is in crisis, it is that, as one Portuguese pensioner told Reuters, "We see no light at the end of the tunnel, just more pain and difficulties." In November the European Commission reported that unemployment on the continent--now in excess of 25 million people--would continue to rise. "The economic outlook is bleak and has worsened in recent months and is not expected to improve in 2013," the Commission found. "The EU is currently the only major region in the world where unemployment is still rising."

A UN report predicts that Europe will not recover the jobs lost in the 2008 financial crisis until at least 2017. One EU study found that the crisis threatens to turn the 94 million Europeans between ages 15 and 29 into a "lost generation."

All this translates into a level of economic misery that Europeans have not seen in more than 80 years. Indeed, Standard & Poor says Greece's meltdown is worse in "duration and scale" than Germany's was during the 1930s. The aid agency Oxfam reports that if the Madrid government's current austerity policies continue, the percentage of people below the poverty line in Spain could rise from 27 percent to 40 percent. United Kingdom Chancellor George Osborne says he expects his country's austerity program to continue until 2018.

The pain is so intense that it has helped fuel credible regional succession movements in Spain, Belgium, and Scotland.

But the push for yet greater austerity has less to do with a deep concern by Europe's elites over debt--it is high but manageable--than as part of a stealth campaign aimed at dismantling rules and regulations that protect worker rights, unions, and the environment.

"We are seeing some worrying signs of anti-business rhetoric among some of Europe's leaders and believe that this is not a productive and collaborate approach to take," DuPont's head man for Europe, the Middle East and Africa told the Financial Times. "Business and government need to collaborate to face the challenges of the future."

The "anti-business rhetoric" comes mainly from workers--and increasingly members of the middle class--desperate to hold on to jobs and a living wage. Ford, General Motors, Hewlett Packard, Citibank and Japan's Nomura Bank have cut jobs, increasingly moving their operations to "developing countries," that is, those with weak unions and/or authoritarian governments. While U.S. executives increased their investments in Europe by only 3 percent, they have amped up those in the "developing world" by 25 percent.

In short, corporations are saying to Europeans, give up your working conditions, wages, and benefits, or we export your jobs.

Workers have not taken this employer offensive lying down. There have been strikes and walkouts from Spain to the Czech Republic, and austerity adherents have suffered ballot box reversals. Chancellor Angela Merkel--the queen of harsh economic policies--took a beating in the last round of German state elections.

The Obama administration could help halt Europe's plunge from first world to second world status, but is has been largely silent on the austerity/debt formula. For instance, last summer the IMF produced a study indicating that endless austerity would not only tank economies across the continent, but also increase the debt problem. However, that study has yet to be translated into policy, even though the fund's current managing director, Christine Legarde, was the White House's candidate for the post.

Much the same could be said for the World Bank. The U.S. nominated its current American president, Jim Yong Kim of Dartmouth College. Rather than stepping back from austerity programs, however, he recently warned developing nations not to use economic stimulus to improve their economies, because it would raise "indebtedness and inflation."

So, while the U.S. Treasury Department has issued a few mild dissents about the efficacy of austerity programs, the two major economic organizations that the U.S. dominates have held the course--straight for the iceberg.

One thing the White House could do is endorse the call by Alexis Tsipras, leader of the Greek Syriza Party, for a European summit on the debt. Tsipras proposes that such a gathering could do what the 1953 London Debt Agreement did to help post -war Germany recover: cut the debt by 50 percent and spread payments over 30 years.

A major concern for Washington is the North Atlantic Treaty Organization (NATO), originally created in 1949 to deal with a supposed threat of a Soviet invasion of Europe. Recent archive research demonstrates that the Soviets never even had such a plan on paper. The hordes of Red armor pouring through the Fulda Gap was a construct of the Cold War, little more than a rationale for maintaining significant U.S. military forces on the continent.

But NATO's role shifted after the collapse of the Soviet Union in 1989. Violating a pledge not to push NATO eastwards, the alliance vacuumed up former Warsaw Pact members, Poland, Bulgaria, Romania, Hungary, Czechoslovakia (now two countries), and Albania, and added Latvia, Lithuania, and Estonia. There are currently 28 members of NATO, including the U.S, and Canada.

While NATO intervened in the 1995 Bosnia-Herzegovina war, it was not until the 1999 war with Yugoslavia that the alliance shifted from defense to offense. But the war against Serbia was still "in country," so to speak, because Yugoslavia is part of Europe. The Sept. 11, 2001 attacks on the World Trade Center and the Pentagon changed all that. While it was the U.S. and Britain that initially invaded Afghanistan, within two years some 50,000 NATO troops were serving in the war, and NATO graduated from a regional formation to an international military alliance.

Its most recent "out of area" operation was Libya, where NATO's airpower, weapons, and Special Forces overthrew the regime of Muammar Gaddafi. NATO is currently involved in the Syrian war, but so far only to deploy missiles in Turkey and support the insurgents with money, supplies and intelligence. Direct intervention is a possibility, but the muddled nature of the opposition to the Assad regime apparently gives some in the alliance pause. Libya's current status as a failed state, and the wash-over of that war into the current crisis in Mali, is on everyone's mind.

The U.S. has long pushed for NATO to become a global alliance that could deal with unrest in Africa, instability in the Middle East and tensions in South Asia and the Pacific. But the Afghanistan experience was a wrenching one for NATO. Rather than a quick war and some feel-good nation building, the war has turned into a quagmire. Member by member, NATO has bailed out in the last three years, and the war is extremely unpopular on the European home front.

But Europeans are not the only people turning away from foreign engagements. The Afghan War is also deeply unpopular in the U.S., which creates a problem, because military power--its actual use or threat of it--has been central to American foreign policy since the 1846 Mexican War. Besides Afghanistan, the U.S. is currently fighting wars in Yemen and Somalia, aiding the French in Mali, chasing after the Lord's Resistance Army in Uganda, setting up drone bases in North Africa, and increasing its military footprint in Asia and Latin America. The U.S. is also contemplating attacking Iran over its nuclear program.

But while the U.S. economy is currently stronger than Europe's, spending vast amounts of money on foreign wars is not popular. Having someone to share the bills with--financial and political--is central to strategy. That, in part, explains why the Obama administration has come down so hard on Britain's Conservative-Liberal government's plan for a referendum that could see London exit the EU. Britain is one of NATO's heavy hitters and anything that might weaken that alliance is frowned upon in Washington.

The fact is that the U.S. needs NATO, because it no longer has the resources to go it alone. That is why the Obama administration is leaning hard on NATO members to step up their military spending, hardly a popular request when the continent is on the ropes financially. The U.S. currently pays about 75 percent of NATO's bills and would like to see other countries take on more of that burden. It will be a hard sell. Italy, for instance, is cutting 33,000 troops and 30 percent of its senior staff over the next decade. Britain's Conservatives are finding their plan to spend $36.3 billion on a new generation of nuclear-armed submarines an uphill battle.

The current NATO plan to install anti-missile systems in Romania, Poland, and Turkey is ill-considered and unnecessarily annoys Russia. While the Obama administration was initially skeptical of anti-missile systems--they are expensive, don't work, and accelerate the arms race--the White House now endorses the deployment. As a result, the Russians are modernizing their missile forces and have halted talks over arms control on the continent. Since Iran has neither the warheads nor the missiles to threaten Europe, one can hardly blame the Russians for assuming the NATO ABM system is aimed at them.

The Obama administration should revitalize the Anti-Ballistic Missile Treaty that the Bush Administration dumped and stop the deployment of destabilizing and provocative ABM systems in Europe (and Asia as well).

NATO is an artifact of the Cold War and long since past retirement. It is also dangerous: if you build an alliance you will eventually use it. The debacle of the Afghan War and the chaos that the Libyan war has unleashed on Africa is a warning that the use of military power is increasingly outdated. It also drains valuable resources better used to confront the economic and environmental challenges the world faces.