Bittorrent has just released a new streaming service, BitTorrent Live, to the public. The goal is to make it possible for the public to send video to thousands of people, all over the world. From dissidents reporting on uprisings to soccer moms who want to send video of a game to family and friends, everyone is included. Bittorrent Inc's Justin Knoll says, “We’re aiming for this to be a democratization of streaming technology.” 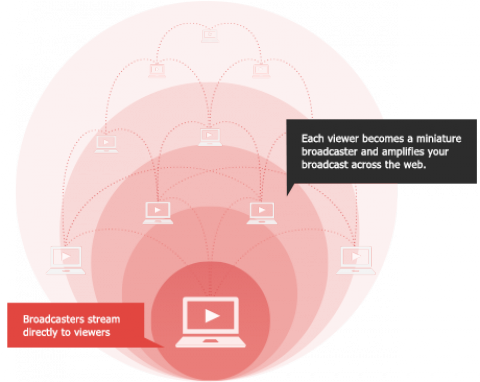 [To read more or to try out Bittorrent Live, go here. -- moderator]

After years of development BitTorrent has now released its live streaming service to the public. BitTorrent inventor Bram Cohen is one of the main developers of the new protocol which he expects to revolutionize online streaming. BitTorrent Inc. sees its BitTorrent Live product as the ultimate tool for creators to reach an audience of millions with minimal bandwidth costs.

In 2001 BitTorrent inventor Bram Cohen unleashed a small revolution by creating the first widely adopted technology that made it possible to download large videos online in a timely fashion.

A decade later and downloading almost seems like an ancient technology. In 2005 video streaming was brought to the mainstream thanks to YouTube, and not much later it became possible to stream content live over the Internet.

The downside of live streaming is that the more people use it, the most costly it gets and the harder it is to guarantee smooth playback for all viewers.

With BitTorrent Live streaming, Bram Cohen and BitTorrent Inc. will solve these bottlenecks.

After years of development BitTorrent Live launches to the public today, allowing people to stream content via BitTorrent with minimal delays. Unlike traditional live streams, reliability improves as more people tune in.

“It’s based on the principles of the BitTorrent protocol. And it’s designed to make real-time reporting, and open expression available to all: eliminating bandwidth, cost, and infrastructure as broadcast barriers,” BitTorrent Inc.’s Justin Knoll told TorrentFreak. “The more people who tune in, the more resilient your stream will be.”

“It has been designed from scratch as the perfect means of sharing events to the masses in real-time and with low latencies, but without the astronomical bandwidth requirements that traditionally constrain content creators,” Knoll says.

One of the goals of BitTorrent Live is to make it possible for the public to send video to thousands of people, all over the world. From dissidents reporting on uprisings to soccer moms who want to send video of a game to family and friends, everyone is included.

The main upside compared to centralized live streaming services is that BitTorrent Live won’t shut down or be interrupted when the audience becomes ‘too large’.

“Current offerings fail with large audiences but with BitTorrent Live every viewer that joins a swarm extends its reach by sharing pieces of the video to other viewers. It becomes more robust with larger audiences and there are no costs associated with the addition of users,” Knoll told us.

“We’re aiming for this to be a democratization of streaming technology,” he adds.

Viewing live streams requires people to install the BitTorrent Live app, which is used to share video with others who are watching. The install process is pretty straightforward and the streams we were able to check out worked fine.

Readers who are interested in streaming content can create an account at BitTorrent Live. Some knowledge of video streaming is currently needed to get started, and the service requires a computer as a broadcast station. Mobile apps will follow in the future.