Labor experts say unions are focusing on the hospitality field and less traditionally unionized workplaces - car washes, retailers, taxi and limo companies - as membership rolls have decreased. The percentage of private sector workers represented by unions has fallen from a peak of about 35 percent in the mid 1950s to about 7 percent, said Fred Feinstein, a former general counsel with the National Labor Relations Board who now works as a union. 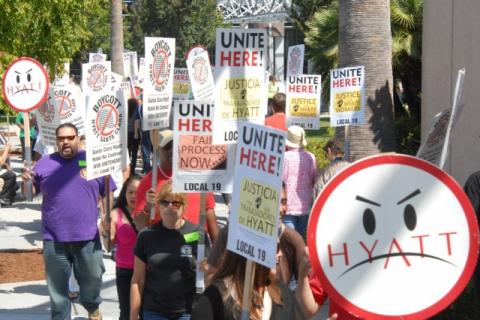 After spending three decades at the Hyatt Regency Baltimore, Kevin Hux eagerly joined efforts this past year to unionize his workplace.

"I joined this union to have some kind of voice and be protected," said Hux, 55, who started in housekeeping shortly after the Inner Harbor hotel opened and now sets up tables for conventions and receptions. Because of staffing cuts, Hux said, he now shoulders tasks that three workers would have handled several years back.

Hux and other employees have been working with organizers from Unite Here, which represents hospitality workers and has embarked on a national campaign aimed at unionized and nonunionized Hyatt hotels. The union is fighting what it says is a growing trend, led by Hyatt, of hotels reducing permanent staff and hiring temporary workers instead.

Hyatt Regency hotel faces federal labor complaint Sign up for Baltimore Sun business text alerts Today's Business Maps 300 Light Street, Baltimore, MD 21202, USA Ads by Google New York Area Arbitration We are experts in Insurance and Business Arbitration. www.CaseClosure.com Teamsters at AMR? Find out why many at AMR say IBT is not for me www.twufacts.org Hyatt Regency managers defend employment policies, and say wage and benefit packages are competitive in Baltimore. The hotel says it has a long history of productive relationships with unions such as the Teamsters, International Longshoremen's Association and Workers United.

"Despite all the union claims, we feel Hyatt maintains one of the best workplaces in the city," general manager Gail Smith-Howard said.

Hotel organizing efforts in Baltimore and elsewhere, along with campaigns at other tourism-related businesses such as casinos, are part of a larger goal by unions to improve wages, benefits and working conditions in service sector jobs, union representatives and labor experts say. Such jobs have largely replaced traditional blue-collar jobs, such as manufacturing, in the United States.

Hotel operations have come under greater scrutiny by unions, experts say, as the tourism sector has rebounded, hotel profits have improved and the sector's employment has grown. Many cities, including Baltimore, have pinned hopes for revitalization and new jobs on tourism, and often pour tax subsidies into projects designed to bring in quality jobs - ones with a living wage, health benefits and opportunities for advancement - labor experts say.

The Hyatt Regency, for instance, received $20 million in city subsidies as the first hotel to open in the early-1980s renewal of the Inner Harbor. But the quality jobs promised haven't materialized, said Tracy Lingo, a lead organizer with Unite Here's Local 7, which represents 2,600 employees at hotels, restaurants, food-service companies and casinos.

"Baltimore is a microcosm," Lingo said. "As a country, we don't have an industrial base. The service sector jobs will be the base of our economy. We have a vested public policy interest in making sure these jobs are good jobs."

Baltimore hotels have historically been mostly nonunion, in contrast to cities such as Washington, Las Vegas and Los Angeles, said Michael Hayes, an associate law professor at the University of Baltimore who specializes in labor law.

Local 7 announced plans last May to organize workers at the nonunion Hyatt Regency, but union leaders and hotel managers have been unable to agree on a process by which workers could decide on union representation.

Labor experts said unions are focusing on the hospitality field and less traditionally unionized workplaces - car washes, retailers, taxi and limo companies - as membership rolls have decreased. The percentage of private sector workers represented by unions has fallen from a peak of about 35 percent in the mid 1950s to about 7 percent, said Fred Feinstein, a former general counsel with the National Labor Relations Board who now works as a union consultant.

"Unions have focused on sectors that can't be shipped overseas," said Janice Fine, an assistant professor of labor studies at Rutgers University. "Historically, hotels were highly organized. . In the old days, a hotel job was a good blue-collar job. It had upward mobility. There's been an effort by hotel unions to regain some of that [membership] density" that was lost when hotels reduced labor costs by turning to subcontracting, outside vendors and temp agencies.

An organizing strategy in many cities has been to argue that new development that was helped by taxpayer subsidies should create permanent jobs with competitive pay for the area's residents, rather than lower-wage, temporary jobs, Fine said. She said such efforts have been successful in many cases.

"Given the state of the economy, we've seen, especially in lower-wage-tiered industries, an increasing reluctance to join a union," Wilson said. "People feel in many ways lucky to have the job they have, and they don't have an interest in rocking the boat. Unions have a more complicated time requesting wage increases because employers are already hamstrung to maintain employment levels."

Most employees have been with the Hyatt nearly 12 years, and a quarter have stayed more than 20, according to Smith-Howard, the general manager. She also defended the use of temporary workers, saying the hotel relies on a core base of employees and supplements them, as many hotels do, with contractor services, especially in slower months when the hotel may operate at 40 percent occupancy.

But the union believes about a third of the workers work for temporary agencies, says Lingo, who added that staffing levels have been reduced since the hotel opened.

"That's really the story all over the country," she said. "Hyatt is ... expecting the same amount of work but with less and less people."

Hux, the Hyatt convention services employee who works a 6 a.m. to 2:30 p.m. shift, said he hopes a unionized workforce can help change what he sees as unfair practices. He said he's been disciplined for being one minute late, had bonus pay deducted for failing to alert managers when leaving at the end of a shift and had no way to challenge evaluations he deemed unfair. He says a point system to discipline workers was never enforced until union organizers showed up.

"I want it to be a better environment for people to come to work without the threat of being afraid or scared by managers," said Hux, who said managers told him not to participate in union organizing.

In November, the National Labor Relations Board issued a complaint against the Hyatt alleging unfair labor practices after Unite Here asked the board to take the case. The federal agency's counsel alleged that managers invoked harsh discipline when employees arrived late to work and fired four workers last year in reaction to their union efforts. The case was settled in January, with the hotel agreeing to reinstate some of the workers "dismissed for workplace policy violations."

Smith-Howard said some policies will stand. "Our employees are expected to report to work on time to take care of customers, like any business," she said.

One reinstated worker, Michael Jones, a 37-year-old dishwasher and steward for 11 years, said he decided to get involved in the union campaign because "I've been seeing a lot of good people treated unfairly." The tipping point came for him on a holiday weekend night when he was expected to work single-handedly to clean and close two kitchens, usually the work of four or five people, he said.

Jones said some permanent workers, including himself, have had their hours reduced and then filled by temporary workers.

"Why can't you give the hours to someone who works here or hire the temp full time?" Jones said. "It's kind of nerve-racking. My dad just retired from the city, and I'm the only one working. You've got to learn to juggle money real well. I rely on this job."

Since the settlement, conditions have begun to improve, he said.

"I'm seeing a lot more people have more courage and more heart," Jones said. "People who would never speak up are very vocal."