Remember the phrase "good union job"? Living wages, basic safety protections, and guaranteed quality healthcare for life. Today Peabody Coal is taking away retiree health care and pensions, yet they have record profits. Why the fight for retiree pensions at Peabody Coal is in everyone's interest. 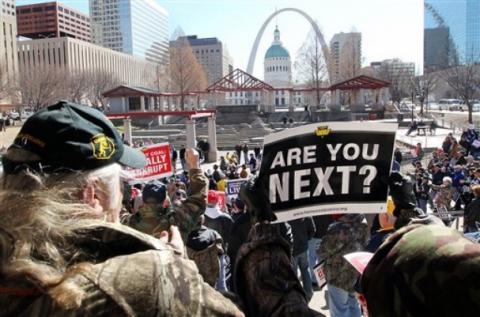 2,000 retired and active coal miners and their families protest in front of Peabody Energy headquarters. Miners' union leader called bankrupt Patriot Coal Corp.'s bid to cut retiree health care immoral, as it seeks millions for executive bonuses and fees, (AP Photo/St. Louis Post-Dispatch, Stephanie S. Cordle)
Remember the phrase "good union job"? In contrast to the contingent fragile world of retail, service and fast food, a good union job is the sort union coal miners have. At least that's what thousands of veteran union miners thought, until suddenly last summer, they discovered that just like some Walmart sub-contractee, a boss they 'd never worked for was trying to break their contract.
Contracts are the heart of "good union jobs." The work may not be glamorous, but the contract gives workers a fair shake. Through collective bargaining, they're able to cut a deal, and in the case of coal miners, that deal is a matter of life and death.  Talk to any miner's wife and she'll tell you she worries every minute he's underground, but once he hits the surface, and if he makes it to retirement, at least he and the family will have "Cadillac" coverage. That's what they've won, in exchange for spending their lives digging rock out of the underside of a mountain in the dark, so the rest of us can run our factories, or turn our lights on.
Living wages, basic safety protections, and guaranteed quality healthcare for life. That's the deal the union fought for, and after 120 years in existence, complete with coalfield wars from Colorado to Harlan County, that's the deal the venerable United Mineworkers of America was able to extract from American coal companies.
As union leaders explain in this informational video, the UMWA extracted decades of those contracts with Peabody Energy and Arch Coal. The companies signed, the miners worked, and the contracts, and the profits piled up, until we hit era of extreme corporate hubris, which is to say, the turn of this century.
At the same time that companies like Apple and Google were figuring out how to  avoid paying tax by moving to tiny exotic islands (or Ireland), and banks and mortgage companies were coming up with derivatives and bundled assets, big coal companies, like Peabody and Arch found that by spinning off smaller companies they could rearrange their responsibilities and their liabilities.  One of those smaller companies was Patriot Coal. In 2007 The Patriot Coal Corporation was created by Peabody and acquired all the company's union operations east of the Mississippi. By 2012, Patriot had acquired most of the union mines of Arch Coal too. Their sort of coal mining was in decline, but they sure had a lot of those retired miners' contracts -- and a lot of liability - for thousands of retirees, who'd never worked a day in their life for Patriot.
To no ones surprise but the miners' and their families,  in July 2012, Patriot Coal filed for bankruptcy and announced its intention to modify its collective bargaining agreements.  The company said it was responding to market declines and trying to survive. Just like Google and Apple, Peabody and Arch say everything they did was legal.  The union accused Peabody and Arch of intentionally setting up a shell to dump their union pensions. Now a federal judge in Patriot's hometown of St Louis has until May 29th to decide if Patriot's bankruptcy plan is valid.

Jim and Shirley Hall
photo: Paula Allen
Jim Hall is a retired union miner. Twenty-four years ago, when the Pittston Coal company tried to stop paying retiree health benefits, he and his wife along with thousands of other UMWA families went on strike on behalf of their fathers and uncles and the generation before them.  "I was working then. The struggle was about the retirees," said Hall last month.  "Now I'm retired and I know what it means to need good healthcare. I'll do anything the union asks me to."  "And so will I" said Shirley. The couple has already traveled out of state from their home in Castlewood VA, to join a Patriot protest.
"What's at stake at Patriot is the union," says Jan Patton, now approaching her 90s, a miner's widow in Clincho VA. "I know what I difference the union makes because I watched what my father and grandfather went through before they had one."

Jan and Ginger Patton
photo: Paula Allen
In 1989, thousands of miners, miners wives, church groups and community supporters lay down in the streets at the entrance to Pittston's mines to the block the coal trucks and world media paid attention. Rev Jim Lewis, former rector at St. John's Episcopal Church in Charleston was among those arrested then in a struggle which was ultimately mostly victorious.
This spring, their benefits on the chopping block once more, miners and their supporters have been lying down in the streets again, but this time in front of the federal court house in St. Louis. The protests are barely registering in the media.
Cecil Roberts, the President of the UMWA, who was a leader in the Pittston strike was one of a dozen protestors arrested in St. Louis in the latest peaceful protest Monday. Rev. Lewis was arrested in a protest late last month.
"In comparison to 1989, I looked over the crowd and saw people much older, weaker, in a weaker environment, economically and in terms of movements," said Lewis who was recently part of a fact finding mission by religious leaders which produced a report, "Schemes from the Board Room."
If the plan is approved, the report estimates that more than 23,000 retired miners and their families, will lose their benefits and that lifetime guarantee. The company's proposing a trust fund instead --  it'll start at $15 million and go up to a maximum of $300 million. That, says the United Mineworkers of America is miserably inadequate. It also sets a dangerous precedent.
What's happening in St Louis doesn't look like a coal-field war but the same things are at stake:  reciprocity, respect, fair play.  If the companies can break the UMWA, heaven help the fast food workers.
====
Laura Flanders/GRITtv
PO BOX 1565, NY 10013
http://GRITtv.org
Twitter: @GRITlaura
[Laura Flanders is the Executive Producer and host of The Laura Flanders Show, an online source for in-depth intelligent interviews with cutting-edge thinkers and doers. She was the founder and host of "GRITtv with  Laura Flanders" which appeared daily on Free Speech TV and on cable and public television stations across the US from 2008 to 2011. On Air America Radio, Flanders hosted The Laura Flanders Show and RadioNation. She is currently a contributing writer to The Nation magazine and a regular contributor to MSNBC. She has also appeared on shows from Real Time with Bill Maher to The O'Reilly Factor. Her books include  the New York Times best-seller, BUSHWOMEN: Tales of a Cynical Species (Verso, 2004) and Blue GRIT: True Democrats Take Back Politics from the Politicians (Penguin Press, 2007).  She tweets @GRITlaura.
Before joining Air America when it launched in March 2004, Laura hosted the award-winning "Your Call," Monday-Friday, on public radio, KALW, 91.7 fm in San Francisco. She was also founding director of the Women's Desk at the media watch group, FAIR and for more than ten years she produced and hosted CounterSpin, FAIR's nationally-syndicated radio program.
Among other awards, Flanders is the recipient of the 2013 Metro Labor Press Council's Communicator of the Year award for her coverage of labor issues, and in the same year, a Stonewall Award from the Stonewall Community Foundation for her leadership in the LGBTQ community.  She lives in NYC with her partner, choreographer Elizabeth Streb.]
[Thanks to the author for sending this to Portside.]