Fast food workers strike in Seattle - 7th city in past 8 weeks. Workers say their wages are stagnant and want a living wage of $15, more opportunities to advance, and the right to organize without retaliation. "Personally I'm on food stamps, my hours have been cut back," Burger King worker Andrew Thomas said. "Being here for a year and half. I haven't gotten a raise." 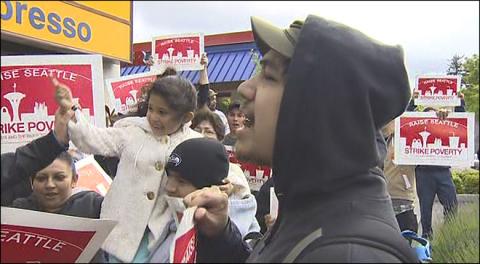 Fast food workers striking in Seattle to protest of low wages, KOMOnews.com
Fast Food Workers Striking in Seattle to Protest Low Wages
by KOMO staff and Kara Kostinich
May 30, 2013
KOMONews.com
Video of live coverage here
SEATTLE -- Fast food workers in Seattle started striking Wednesday night, causing at least two restaurants to close so far, in protest of low wages.
Striking workers caused a Ballard Taco Bell to close early Wednesday and night and a Lake City Burger King in the 14300 block of 15th Ave. N.E. was forced to close Thursday morning, organizers of the strikes said.
"Due to all employees walking out for the strike for poverty today. We are understaffed and unable to serve you at this time. Sincerest apologies - management," a sign outside the Lake City Burger King said.
The workers say their wages are stagnant and want a living wage of $15, more opportunities to advance, and the right to organize without retaliation.
"Personally I'm on food stamps, my hours have been cut back," Burger King worker Andrew Thomas said. "Being here for a year and half. I haven't gotten a raise."
Cody Codden has an associate's degree and is preparing to go back to school, but can only find employment at this Burger King.
"You get work where you can find it and you should also keep looking," he said. "I'm looking for a 40 week hour job, I'm trying to go to school, I'm trying to find something better."
Seattle Mayor Mike McGinn supported the striking fast food workers with several Twitter tweets.
"I support fast food workers' organizing effort because they deserve a living wage that can support their families. #strikepoverty," one of his tweets read.
"Too many fast food workers are being left behind even as Seattle's economy thrives....Seattle believes in shared prosperity for all of our workers, including those in the fast food industry," other tweets from the mayor said.
More walk-outs are planned throughout the day at Burger King, McDonald's, Subway, Arby's, and other national fast food chains across the city, said organizers who are calling the demand for workers' rights, "Strike Poverty and Raise Seattle."
The median hourly wage for food service workers including fast food workers, is $9.50 an hour in the Seattle metro area, according to U.S. Bureau of Labor Statistics.
About 33,000 people work in fast food in the Seattle metro area, according to Census figures.
Upcoming walkouts were scheduled at fast food outlets this morning including the University District Taco del Mar, several in the SoDo and Georgetown culminating at an Arby's there and several restaurants on Capitol Hill including Chipotle, Subway and Qdoba. Workers are scheduled to meet at East Pine and Broadway after 11:30 a.m.
At 4:30 p.m. a rally will be held at Denny Park followed by a march to nearby fast food restaurants, including McDonald's.
The strikes are supported by a group called Good Jobs Seattle, which in turn is supported by organizations such as Washington Community Action Network, Working Washington and OneAmerica.
According to organizers, Seattle is now joining strikes by fast food workers in other cities ranging from New York to Chicago, Detroit, St. Louis, and Milwaukee.

A Seattle Taco Bell shut down by the citywide
(Photo courtesy of GoodJobsSeattle.org)
Fast Food Workers Striking in Seattle
by Josh Eidelson
May 30, 2013
TheNation.com blog
Beginning at 10:30 pm Pacific Time Wednesday, workers at dozens of Seattle fast food locations began striking, launching the nation's seventh work stoppage by fast food employees in eight weeks. Organizers expect workers from chains including McDonald's, Burger King, Taco Bell, Subway, Arby's, Chipotle, Qdoba and Jack in the Box to participate in the walkout, which will last roughly twenty-four hours.
"I'm sick of seeing my co-workers and me essentially get pushed and pushed and barely be able to eat," Taco Bell employee Caroline Durocher told The Nation Wednesday. "And I think it's time that we pushed them back." Durocher said she's hopeful that both co-workers on her late night shift will walk off the job with her.
Like recent fast food strikers in New York, Chicago, Milwaukee, St. Louis and Detroit, the Seattle strikers are holding a one-day walkout to demand a raise to $15 per hour and the right to form a union without intimidation. Like those cities' strikes, Seattle's is supported by a coalition of labor and community groups; in each case, the Service Employees International Union has been involved in supporting the organizing efforts. The Seattle campaign, Good Jobs Seattle, is backed by groups including Working Washington, the Washington Community Action Network and OneAmerica.
The Seattle strike comes two weeks after New York's fast food workers campaign released a report alleging rampant wage theft in the industry, and hours after the Congressional Progressive Caucus announced plans for a nationwide tour focused on low wages and economic inequality. It also follows a day-long strike last week in Washington, DC, staged by federally-contracted workers - including fast food employees at federal buildings - demanding that President Obama take executive action to improve their working conditions.
Asked Wednesday about the previous strikes, a Burger King spokesperson e-mailed, "For decades, Burger King restaurants have provided an entry point into the workforce for millions of Americans, including many of the system's franchisees who began their careers working at local Burger King restaurants." Noting that nearly all of its restaurants are owned and operated by franchisees, the company added, "Burger King restaurants offer compensation and benefits that are consistent with the QSR [Quick-Service Restaurant] industry. Burger King Corp. does not make employment-related decisions for our franchisees." Taco Bell and McDonald's did not respond to requests for comment Wednesday afternoon.
"A lot of times we'll work `til 4 or 5 in the morning trying to get things done for corporate people to make money," said Durocher. "And we don't ever see any of that money." With a good raise, she told The Nation, "I'd be able to save money to get into my own place... I'd be able to eat something other than Taco Bell. I'd be able to go back to school."
The fast food strike wave represents organized labor's most dramatic challenge to the massive, fast-growing and virtually union-free industry. As I've written previously, fast food's low wages, precarious employment and emotional labor are increasingly representative of the larger economy. The shape of the strikes - single-day walkouts, by a minority of the workforce, with an emphasis on community support - represents an increasingly prevalent labor strategy for attempting to build worker organization, squeeze management and avert retaliation, in the face of legal and economic changes that have made strikes more risky and less effective. (While other cities' campaigns filed National Labor Relations Board prior to their strikes alleging law-breaking by management, as of Wednesday afternoon the Seattle campaign had not.)
Rather than training all their firepower on a single company, the fast food campaigns have chosen to target all the industry players at once. That strategy risks diluting resources and reducing the pressure on an individual CEO, but offers the chance to draw greater public engagement and perhaps to peel off whichever chain is most willing to make a deal. While fast food workers are often legally employed by franchisees, any realistic scenario for winning union recognition or a major pay hike would require convincing national CEOs that concessions would be less painful than further conflict. That remains a tall order.
Asked whether she was nervous about retaliation for going on strike, Durocher answered, "No, because it's worth it." She said she was "really excited" to strike after seeing other fast food workers do so on the East Coast and in the Midwest: "It's so empowering, and it reminds me that it's not just Seattle - it's the whole country that needs to change."
Update (11:45 am EST Thursday): According to the Good Jobs Seattle campaign, workers are now on strike at dozens of locations, and have forced shutdowns at three stores: A Taco Bell and a Burger King on 15th Avenue, and a Subway on Broadway (photo above).
Following a string of morning strike rallies, strikers plan to converge at 4:30 pm Pacific Time for a march from Seattle's Denny Park to a series of fast food stores.