The Workers Defense Project, a Union in Spirit

The Workers Defense Project, founded in 2002, has emerged as one of the nation's most creative organizations for immigrant workers. Its focus is the Texas construction industry, which employs more than 600,000 workers. It is one of 225 worker centers nationwide, aiding immigrant workers. Workers Centers show what is possible, and may help infuse new life into the labor movement. 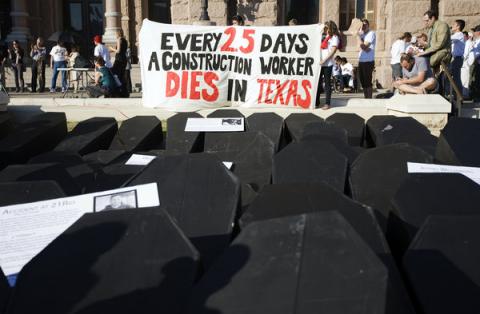 At a Workers Defense Project protest in 2011, top, at the Texas Capitol in Austin, mock coffins symbolized workers killed on the job., New York Times / Ricardo B. Brazziell/Austin American-Statesman, via Associated Press
Like most construction workers who come to see Patricia Zavala, the two dozen men who crowded into her office in Austin, Tex., one afternoon in March had a complaint.
The workers, most of them Honduran immigrants, had jobs applying stucco to the exterior of a 17-story luxury student residence. It was difficult, dangerous work, but that was to be expected. What upset them was that for the previous two weeks their crew leader had not paid them; each was owed about $1,000.
Ms. Zavala, the workplace justice coordinator at the Workers Defense Project, listened to their stories and then spent a month failing to persuade the contractors to pay the back wages. So Ms. Zavala, 27, a graduate of the University of California, Santa Barbara, and the daughter of a Peruvian immigrant, turned to what she calls the nuclear option: the workers filed a lien on the building site. That legal maneuver snarls any effort to make transactions on the property and sometimes causes banks and investors to freeze financing.
The lien, along with a threatened protest march, quickly got the attention of the dormitory's developer, American Campus Communities, and the general contractor, Harvey-Cleary Builders. Within hours, Harvey-Cleary arranged a meeting between the stucco contractor and the unpaid workers, and, presto, Harvey-Cleary and the contractor, Pillar Construction, agreed to pay the $24,767 owed to the workers.
"Liens are the very best tool workers have," said Cristina Tzintz£n, executive director of the Workers Defense Project. Instead of dealing with subcontractors, she said, "you're negotiating with the project owner and general contractor. They can no longer shift responsibility and say: `I paid the guy downriver. It's out of my hands.' "
The Workers Defense Project, founded in 2002, has emerged as one of the nation's most creative organizations for immigrant workers. Its focus is the Texas construction industry, which employs more than 600,000 workers, about half of whom, several studies suggest, are unauthorized immigrants.
Immigrant workers, especially those who are undocumented, are especially vulnerable to abuse by contractors. Each year, the Workers Defense Project, which has 2,000 dues-paying members, receives about 500 complaints from workers who say they were cheated out of overtime or denied a water break in Texas' scorching summer heat or stuck with huge hospital bills for an on-the-job injury.
The Workers Defense Project is one of 225 worker centers nationwide aiding many of the country's 22 million immigrant workers. The centers have sprouted up largely because labor unions have not organized in many fields where immigrants have gravitated, like restaurants, landscaping and driving taxis. And there is another reason: many immigrants feel that unions are hostile to them. Some union members say that immigrants, who are often willing to work for lower wages, are stealing their jobs.
"The Workers Defense Project is not like a union - it welcomes everyone," said Luis Rodriguez, a Mexican immigrant who sought the group's help after he lost a finger in a construction accident. "It is always willing to take in more people and help more people."
At a recent Workers Defense Project meeting - they are held every Tuesday night - the atmosphere was part pep rally, part educational session, part social hour. After a dinner of tacos, rice and beans, about 60 workers plotted strategy for a demonstration against the developer of a 1,000-room Marriott hotel. A skit mocking the developer drew raucous laughter. The energy and sense of solidarity were reminiscent of what America's labor unions had many decades ago, before they started to stumble and stagnate.
Worker centers, which are among the most vigorous champions of overhauling immigration laws, coalesce around issues or industries. For example, there is Domestic Workers United, which persuaded New York and Hawaii to enact a bill of rights for housekeepers and nannies, and the Coalition of Immokalee Workers, which has gotten most Florida tomato growers to adopt a workers' code of conduct and to increase pay by at least 20 percent. Young Workers United played an important role in persuading the San Francisco City Council to enact a paid-sick-days law and a minimum wage of $10.55 an hour. With labor unions losing members and influence, these centers are increasingly seen as an important alternative form of workplace advocacy, although no one expects them to be nearly as effective as unions in winning raises, pensions or paid vacations.
"Worker centers are filling a void by reaching out to a work force that is particularly hard to reach out to," said Victor Narro, a specialist on immigrant workers at the University of California, Los Angeles.
Jefferson Cowie, a labor historian at Cornell, said: "Worker centers are part of the broad scramble of how to improve things for workers outside the traditional union/collective bargaining context. They've become little laboratories of experimentation."

Manuel Ramirez, standing, led a meeting at the project office in Austin (Erich Schlegel for The New York Times)
As worker centers go, the Workers Defense Project in Austin has racked up an unusual number of successes. It has won more than $1 million in back pay over the last decade on behalf of workers alleging violations of minimum wage and overtime laws. A report it wrote on safety problems spurred the Occupational Safety and Health Administration to investigate 900 construction sites in Texas - leading to nearly $2 million in fines.
And, despite a liberal image, the group made common cause with law-abiding contractors to persuade the state's Republican-dominated legislature to approve a law that made wage theft - an employer's deliberate failure to pay wages due - a criminal offense. The Workers Defense Project has just 18 employees, and its executive director, Ms. Tzintz£n, 31, earns just $43,000 a year. But it managed to bring mighty Apple to the negotiating table. The group extracted a promise that construction workers on Apple's new Austin office complex would receive at least $12 an hour, not the more commonly paid $10 - as well as workers' compensation coverage.
The workers' compensation pledge was an important victory. The construction industry in Texas has a higher fatality rate than that in most other states, but Texas is the only one that does not require building contractors to provide workers' compensation to cover an injured worker's hospital bills and disability benefits.
"We like organizing here in Texas," Ms. Tzintz£n said. "Things can only go up because working conditions are so awful."
As soon as word got out in March 2012 that Apple was planning to build a $300 million operations center in Austin, the Workers Defense Project sprang into action. Gregorio Casar, the group's business liaison - his title might more fittingly be thorn-in-the-side - learned that Apple hoped to receive tax incentives in exchange for promising to create 3,600 full-time jobs with salaries averaging at least $63,000.
But Mr. Casar, a University of Virginia graduate who is the son of Mexican immigrants, assumed that Apple's construction contractors would pay much less than that. The typical wage for nonunion construction laborers in Texas is just $10 an hour - about $20,000 a year.
Relying on relationships that the Workers Defense Project had built over the years, Mr. Casar, 24, persuaded the Austin City Council to require Apple to hold talks with the group as a condition for $8.6 million in city tax incentives. (The group had previously persuaded the council to enact Texas' first ordinance requiring rest and water breaks for construction workers.)
In these discussions, Mr. Casar demanded that Apple's construction contractors pay at least $12 an hour, provide safety training and workers' compensation, and allow the group's representatives to go to the site to inspect working conditions.
"Like many companies, Apple resisted at first because they wanted total flexibility," Mr. Casar said.
So the group turned up the heat. On March 22, just before the council's hearing on Apple's tax incentives, 100 protesters demonstrated outside City Hall. Inside the council chambers, Jose Nieto, a demolition worker affiliated with the Workers Defense Project, testified about how he had once nearly bled to death when a large mirror he was removing from a hotel wall broke and sliced into his arm. His hospital bill, which included multiple operations, was more than $80,000. He had no workers' compensation to pay for the operations or support his family.
Mr. Nieto implored the council not to grant Apple the tax incentives unless it accepted the Workers Defense Project's demands. "It is in your power to prevent things like this from happening to other people," he told the council.
Several weeks of negotiations ensued. Apple - then under criticism for conditions at the Foxconn plants in China that build its products - agreed to almost all of the group's demands.
"Apple is a strong supporter of workers' rights around the world," Steve Dowling, an Apple spokesman, said recently. "We've had a productive dialogue with the Workers Defense Project since we first heard from them last year. We shared many of the group's goals."
Ms. Tzintz£n has an explanation for these victories. "We make it very hard for people to oppose us publicly," she said. "We know what we're asking for is the bare minimum, and we remind everybody of that."