Dispatches from the Culture Wars - Who Dunnit edition

The Kristol memo; We! Are! The 1%!; 7 Craziest Obamacare Conspiracy Theories; Climate, chemtrails and conspiracy; Liberalism in the (think) tank 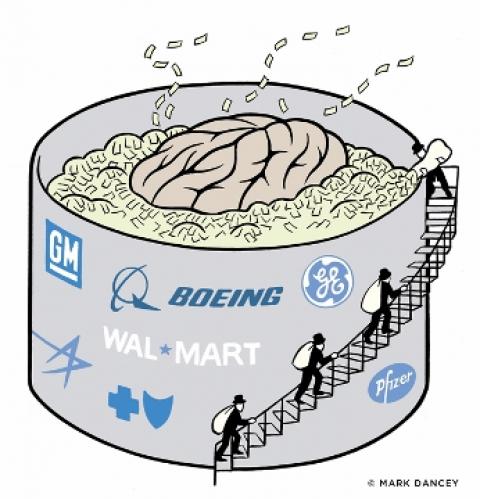 Stepping Back from the Heady Storm

Yes, there are many Republican partisans who've imbibed the hocum of death panels, skyrocketing costs and all the rest. But the real fear among Republican strategists is that reform will work and in so doing become an ideological and political defeat of immense proportions for the Conservative movement. It's edifying again to go back to the brilliant and notorious 'Kristol Memo' of 1993, an encapsulation not only of the massive defiance strategy against Health Care Reform but in many ways the initial manifesto of manufactured gridlock as a political strategy that now rules our national politics.

One of the largest components of the Affordable Care Act - the health exchanges from which Americans can buy discount health coverage - will go into effect on October 1. And that has right-wingers in conspiracy theory high gear. Here are seven conspiracy theories about the health care law, along with debunkings from the fact-check websites PolitiFact and Snopes.

Why do so many people accept a theory for which there is no scientific evidence while rejecting a serious and potentially catastrophic phenomenon that can be easily observed and for which overwhelming evidence has been building for decades?

To begin, climate change denial and chemtrails theories are often conspiracy-based. A study by researchers at the University of Western Australia found "endorsement of a cluster of conspiracy theories ... predicts rejection of climate science as well as the rejection of other scientific findings."

Many deniers see climate change as a massive plot or hoax perpetrated by the world's scientists and scientific institutions, governments, the United Nations, environmentalists and sinister forces to create a socialist world government or something.

"Social movements that explicitly defend the interests of the rich and the almost-rich have been a recurring feature of American politics," Isaac William Martin, a sociologist at the University of California, San Diego, reminds us in his new book, Rich People's Movements: Grassroots Campaigns to Untax the One Percent.

With meticulous research, Martin shows how the modern Tea Party grew from decades of efforts by American oligarchs to de-tax themselves. They relied on cranks, rogues, and a few scholars to polish the most effective ideological marketing pitches. Their goal was selling the notion that if the rich bear less of the burden of government, all of us will somehow end up better off. These pitches have worked best when some newly proposed government initiative - like President Barack Obama's Affordable Care Act - arrives to pose the threat of major policy change. They have depended on diverting attention from obvious questions, such as just how does a smaller tax bill for the Koch brothers benefit us?

By Ken Silverstein
The Baffler

To understand just how Thomas Friedman, Anne-Marie Slaughter, and Gail Collins have been repurposed as purveyors of bold new ideas, it helps to see how the world of liberal think tanks has been upended, ever so gently, by a steady onrush of corporate funding - and corporate-friendly policy agendas.