How Redistribution to the Rich Has Broken the Back of America

The middle class, once the backbone of a strong American society, has been broken, beaten down, pushed further and further toward poverty levels. Here are five well-documented ways that this has happened.

October 7, 2013 Paul Buchheit BuzzFlash
Printer friendly
How Redistribution to the Rich Has Broken the Back of America Published October 7, 2013 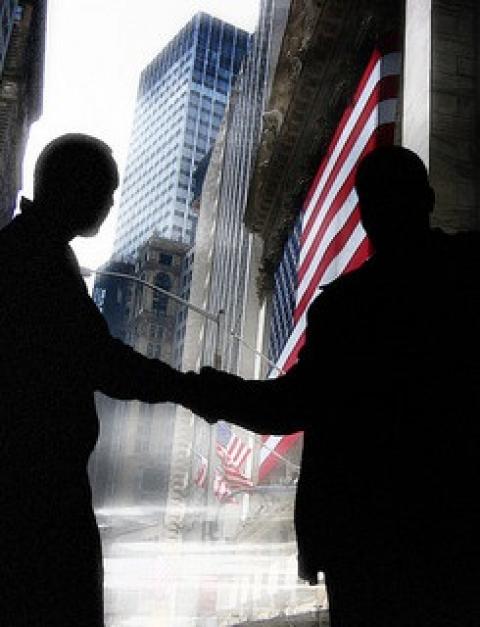 Conservative columnist Thomas Sowell recently declared, "The history of the 20th century is full of examples of countries that set out to redistribute wealth and ended up redistributing poverty."

Ironically for thinkers like him, the last 35 years have redistributed U.S. poverty by redistributing wealth to the rich. The middle class, once the backbone of a strong American society, has been broken, beaten down, pushed further and further toward poverty levels. Here are five well-documented ways that this has happened.

We are told that the richest 1% doubled its share of income in the past thirty years. But from 1980 to 2006, according to both IRS and CBO figures, they nearly TRIPLED their share of income -- and that's after-tax income.

After 2006, the recession set everyone back temporarily, but in the first two years of the recovery, the richest 1% captured an incomprehensible 121% of the income gains (others saw debt rise faster than income).

In 2009 the poorest 47% of America owned ZERO percent of the nation's wealth (their debt exceeded their assets).

Hard to believe it could get even worse. But because of the housing crisis and recession, the median family net worth dropped 40% between 2007 and 2010, while the richest Americans were regaining all their losses, and beginning an even steeper climb to the top.

Perhaps the biggest reason for this wealth redistribution is that the richest 10% own almost 90 percent of stocks excluding pensions. Since the recession, as the U.S. economy has "recovered," almost two-thirds of the gain was due to growth in the stock market.

3. The Redistribution of Productivity: Boosting Profits Rather Than Wages

From 2001 to 2011, total corporate profits more than doubled, to almost $2 trillion, while the corporate federal income tax rate was cut in half.

Incomes for 99% of Americans have declined since the recession, with the median household income dropping by 7.3 percent. Low-income jobs ($7.69 to $13.83 per hour) made up 1/5 of the jobs lost to the recession, but accounted for 3/5 of the jobs regained during the recovery.

4. Finance is Outrunning Society, and Taking the Money With Them

Americans once trusted the financial industry to safeguard their retirement money. But high tech has transformed high finance, at a much faster rate than the average investor can understand the changes.

Rolling Stone reports on the loss of $2.3 billion in pension money in Maine -- and the simultaneous billing of $2.1 billion by the hedge funds, private-equity funds and venture-capital funds. Another report tells of local funding crises caused by indecipherable "structured finance" deals sold by bankers with promises of big returns. In 2007 a hedge fund manager (John Paulson) made $3.7 billion by conspiring with Goldman Sachs to create packages of risky subprime mortgages, so that in anticipation of a housing crash he could use other people's money to bet against his personally designed sure-to-fail financial instruments.

The high-speed high-tech chicanery continues in the stock market, where programs can intercept 'buy' orders and in a few nanoseconds purchase the stock and then complete the 'buy' order for a few pennies more.

The bankers and hedgers and hustlers have made up new rules for making money, and our government representatives don't know what's going on, or don't care, or don't want to stop the financial games that ultimately generate campaign funds. Finance is quickly printing its own new money. In less than ten years, the world's wealth has approximately doubled, from $113 trillion to $223 trillion. Much of that is sheer speculation: the derivatives industry is worth over $1 quadrillion. But those speculative transactions get cashed in as real money.

It's a dizzying high-speed fantasyland that redistributes the real money of the middle class to the super-rich while inventing new forms of fees and bonuses along the way.

There are numerous ways the very rich have cajoled and coerced and connived their Congressional partners to redistribute money in their direction. Like the lower capital gains rate. An astonishing 75 percent of dividend and capital gain subsidies go to the richest 1%. That's still not enough for hedge fund managers, who call their income "carried interest" instead of "income" to keep their tax rate at the capital gains rate. And even this small amount may not be paid. Hedge fund managers with incomes in the billions can pay ZERO income tax by deferring their profits through their companies indefinitely.

Banks have arranged to get lower interest rates, saving them $83 billion per year.

The U.S. federal government spends $100 billion a year on corporate welfare, almost half for big agriculture and the fossil fuel industry.

Another $150 billion per year goes for excessive pharmaceutical expenditures, as the drug companies have lobbied for laws to keep cheaper medications out of the hands of Americans.

Better to Call It Pre-Distribution

The term 'pre-distribution' better represents, according to political scientist Jacob Hacker, "the way in which the market distributes its rewards in the first place." Unregulated free-market capitalism simply makes the rich richer. Even if they have to break the backs of productive middle-class Americans to get their way.

Paul Buchheit is a college teacher, a writer for progressive publications, and the founder and developer of social justice and educational websites (UsAgainstGreed.org, PayUpNow.org, RappingHistory.org).