This is a turning point for BART workers who are now on strike again. It's time for labor and community to come together to support them. 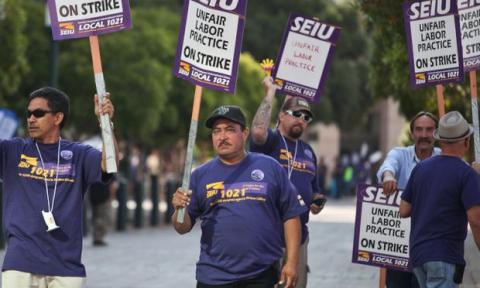 The San Francisco Bay Area is being hit with another transit strike after negotiations once again broke down between Bay Area Rapid Transit management and the unions that represent workers. The unions reported being close to agreement on pay and benefits, but could not agree on work rules:

“They want to fundamentally and significantly change the conditions under which we work,” said Roxanne Sanchez, president of the SEIU Local 1021, which along with Amalgamated Transit Union Local 1555, are the two biggest unions at BART.

Sanchez said the unions want BART managers to agree to arbitration on work rules. BART management has declined to do that, preferring negotiation.

Management is spinning furiously, trying to make this look like the unions' fault, but when one side is willing to go to a neutral third party for resolution and the other isn't ... well, you do the math.

The strike is expected to once again gridlock the entire area, hurting workers and businesses and causing a serious environmental impact as more people drive (and sit in traffic). There can be no doubt that these workers, who have not had a raise in years and have made significant concessions to help the BART system overcome a deficit, are enormously important to the area's economy. Yet in a replay of the story we see so often, management has demands for concessions and blame for the workers, rather than negotiating in good faith.

This is a turning point for BART workers who are now on strike again. It's time for labor and community to come together to support them.

After a marathon 28 hour bargaining session, BART unions thought they had a framework for a deal, including meeting BART's demands on healthcare and pension and an outline of a deal on wages. But BART management blew up negotiations by insisting workers sacrifice workplace rules that protect workers from abuses like sexual harassment.

Again and again, management has demonstrated their unwillingness to bargain and true agenda to force workers into striking. BART unions offered to settle outstanding issues by submitting them to binding arbitration. Management refused.

Now BART workers have been forced on strike. Let's stand with them--in actions today, Monday and for as long as it takes.

As the Chinese Progressive Association declares, "Even though many in SF and the United States are unemployed and most low wage workers are not in unions, we know we need to support the BART workers because they have a union, a stable and safe job. This has lifted thousands of immigrant and people of color families out of poverty. Even with BART wages, many can barely stay in the Bay Area. If they lose, we all will lose. This is a glimpse of a full-scale war on public sector workers and all workers. If they can take down good and stable public sector jobs, they can erode all jobs – even more." See CPA's statement for ways to cut through the distortions of corporate media and management and more reasons why community should back BART workers.