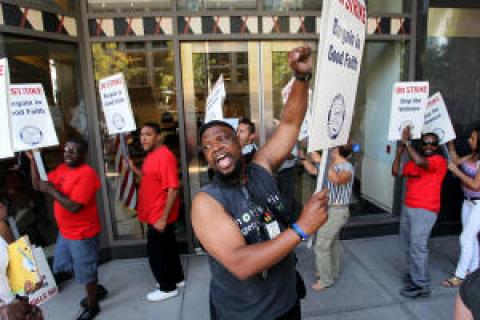 As BART workers walked picket lines last week, the Bay Area had a new reason to debate whether public strikes are a legitimate sign of working people's frustrations over shrinking pay and rights -- or the delusional tactics of a movement that's out of touch with economic reality.

The Great Recession left so many Americans jobless, underwater on their mortgages or just barely scraping by that many no longer identify with public workers whose still-strong wages and benefits are paid with tax dollars -- and whose contracts often are overseen by the same politicians that their unions bankroll. "If I can't have it, why I should I pay for it for them?" this reasoning goes -- a feeling reflected in public opinion polls.

"They have clearly not been paying attention to the California cities and other industries which have failed, and the pensions that were lost or the contributions by the employer that were reduced or eliminated entirely," said Sierra Reed, 26, of Oakland, noting that she gets only 1 percent annual raises as a policy and diplomacy assistant at a foreign consulate in San Francisco. "There are plenty of people looking for work that will happily take what they will not."

Yet others see striking public workers as the last defenders of what's left of the middle-class American dream -- wages that pay the bills and allow for modest savings, affordable health insurance that protects the family, a secure retirement. "If they can still win it, maybe there's still hope that I can, too," this reasoning goes.

However you view the debate, it's not going away.

BART trains are at least temporarily running again and a last-minute deal avoided an East Bay Regional Park District strike that could have stymied residents' Fourth of July plans. But Oakland city workers and AC Transit drivers could be on strike soon, and Hayward city workers, some San Jose teachers and others might be close behind.

As new laws let public-sector unions build membership from the 1960s through the 1980s and stay relatively strong since then, private-sector union membership has plummeted since the 1950s. The Bureau of Labor Statistics reports that union membership among all U.S. workers fell to 11.3 percent in 2012 -- the lowest level since 1916.

Yet public-sector workers had a union membership rate of 35.9 percent -- more than five times that of private-sector workers, at 6.6 percent. Since 2009, public workers have made up a majority of all union members. Gallup in August reported that 52 percent of Americans approve of unions, only slightly above an all-time low of 48 percent in 2009, compared with 65 percent in 1999 and 72 percent in 1936. By last year, 52 percent believed unions would grow weaker in the future, and 41 percent believed unions should have less influence than they have today.

Wages for most working people, meanwhile, have remained stagnant over the past several decades, while the top 1 percent of earners have gotten much, much richer. In recent years, private-sector raises often have been minimal or nonexistent. And more and more fixed-benefit pension plans have been replaced by 401(k) savings plans to which employers contribute less and less, as health care premiums have skyrocketed. As a result, many workers have little sympathy for BART workers who make an average of $78,000 including overtime per year, contribute nothing toward their retirement and pay a flat $92 monthly for health insurance, yet demand a 20.1 percent pay bump over three years.

"The voters' reservoir of sympathy for public-sector labor is running very low, and a lot of it is the perception ... that they live in a bubble, that they're not subject to the same competitive pressures that the private sector is," said Jon Coupal, president of the conservative Howard Jarvis Taxpayers Association. "These very public strikes that are hugely disruptive, I think, are just going to rub salt in an open wound." Then again, BART workers haven't seen a raise in five years and earn no Social Security benefits. And overall raises in the public sector have consistently declined in recent years while private-sector workers have seen raises bounce back after suffering much deeper hits during the depths of the recession.

Some workers in the private sector also see public unions as the only ones left with enough leverage to fight for the kind of pay and benefits that built the American middle class. Art Pulaski, executive secretary-treasurer of the California Labor Federation, said, "We want everybody to get a 21 percent increase in their wages." But even that, he noted, would bring American workers only to where they should've been in 1989, given their long-running wage stagnancy. "People would still be behind where they would've been if we had had a fair economy," he said.

Still, Pulaski acknowledged that when public employees strike, the work stoppage disproportionately affects other working people. A BART strike might be an inconvenience for rich people, he said, but it could keep low-income workers who have fewer transportation alternatives from the jobs that they need to survive. "It's a shame and it's an awful circumstance," he said. "And I think that's why these workers have not gone on strike for the last 16 years."

Terry Moe, a Stanford University political-science professor and Hoover Institution senior fellow who is researching the power of public-sector unions, said they're just like any other unions -- "in the business of protecting jobs and maintaining the material well-being of their members." Strikes, he said, are their most potent weapons. "If they never do it, then they don't have a threat," Moe said. "This is a bad time for them," he added.

"The economy is in the tank, there's no money, the pension problem is driving cities to the point of bankruptcy and creating serious budget problems for the states. So this is not a good bargaining environment." But don't mistake this for a last gasp, Moe said. "In another several years when the economic crisis has passed, they're not going to be so weak," he said. "They won't be making any concessions, and they'll be looking to get back what they'd lost."