Baseball may not be a game that handles change without crisis. But it is a game that makes saps of us all. 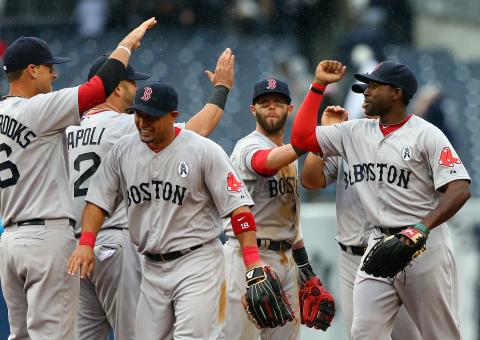 I grew up loathing any and all teams from Boston, yet, in the interests of honesty I have to write, as the cheers still rise from Fenway Park, that I cannot stop smiling. The best thing about baseball is that unlike any other sport, or frankly any other product of our amnesiac culture is that it connects us directly to the past. The Boston Red Sox won the World SeriesWednesday night, their third championship in the previous decade but their first title clinched in Boston since 1918. Think about that. Baseball was already the national pastime by 1918. The players were all lily-white but the rules, most of the equipment and the contours of the field were the same. The tennis and golf equipment of 1918 belongs in the Smithsonian. The NFL and NBA did not even exist in 1918. The nation was less interested in more sports leagues than getting through an era defined by Woodrow Wilson, the First World War, the Russian Revolution, and the Spanish Flu. Oh, and as for those Red Sox players of 1918, they were led by a young pitcher named Babe Ruth,

Among the confusion and cultural dissonance that defines so much of the study of history, baseball remains the kind of connective bond that somehow at least provides a compass for understanding the social language of the past. We believe that Walter Johnson could step out of an Iowa cornfield and compete in Fenway Park today. And if "Big Train" had a sore arm, we'd ask Satchel Paige to use his "hesitation pitch" and make quick work of these 21st century spawns of sabrmetrics.

Baseball may not be a game that handles change without crisis. But it is a game that makes saps of us all. Proof positive, I am sitting here with a big dopey smile on my face because the Red Sox were able to win in Boston and celebrate at Fenway. The kid in the Mets hat who still lives somewhere in my brain may be passed out in a depressed stupor mumbling about kicking my ass. Yet grown up me, who stopped wearing a Mets hat when I learned that their owner had allowed Bernie Madoff to loot the franchise, likes seeing this group of scraggly bearded doofuses dancing around in their baseball pajamas and likes seeing people on social media doing something rare and that's reckon with this 95 year gap and the passage of time. Boston or not, it is all kinds of awesome.

To be clear, I still don't give a damn about all that New England baseball-poetry-by-George-Will hooey. I do however give a damn about the fact that this was a team once defined aggressively by its whiteness. They held out for 12 years after Jackie Robinson's 1947 debut making them the last team in baseball to integrate. Now they are a team whose MVP is a larger than life Dominican who everyone calls Big Papi and their best pitcher, the man who struck out the last batter of the series is a damn unhittable Japanese dervish named Koji Uehara, with stuff filthier than that facial hair. And as for those beards, which crossed the line into either Hasidic minstrelsy or a public health hazard several weeks ago, as long as I don’t have to smell them, they’re awesome too. This team would have made Tom Yawkey, the team's old owner during the days of "whites only" faint and his general manager Joe Cronin, the man who ran a young Willie Mays off of his field, would not have been far behind. Thank you baseball. Thank you for reminding us about what thankfully has changed and what joyously has remained the same. The fact that they did this to rapturous cheers of the city of Boston is just something I'm going to have to live with.

Dave Zirin's most recent book, is the acclaimed Game Over: How Politics Has Turned the Sports World Upside Down (The New Press.)