The Republican War on Women: The Newly Invisible and Undeserving Poor

The U.S. Congress is fighting over how much to cut food assistance to needy families. Everyone knows that women and their children are the poorest people in America, but strangely, the faces of women have disappeared from the debate and have been absorbed into abstract “needy families.” 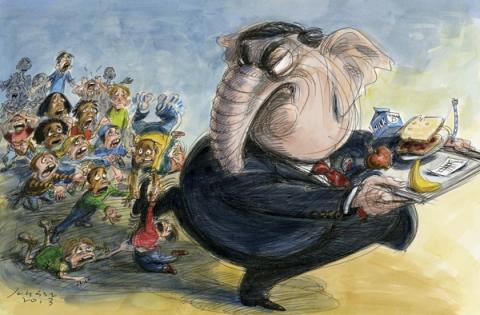 While the rest of the world debates America’s role in the Middle East or its use of drones in Pakistan and Afghanistan, the U.S. Congress is debating just how drastically it should cut food assistance to the 47 million Americans - one out of seven people -  who suffer from “food insecurity,” the popular euphemism for those who go hungry.

The U.S. Government began giving food stamps to the poor during the Great Depression.  Even when I was a student in the 1960’s, I received food stamps while unemployed during the summers.  That concern for the hungry, however, has evaporated. The Republicans - dominated by Tea Party policies - are transforming the United States into a far less compassionate and more mean-spirited society.

The need is great. Since the Great Recession of 2008, the food stamp programme - now called SNAP (Supplemental Nutrition Assistance Program), has doubled from $38 billion in 2008 to $78 billion in the last year. During 2012, 65 million Americans used SNAP for at least one a month, which means that one out of every five Americans became part of the swelling rolls of “needy families,” most of whom are women and children.

Democrats defend the new debit card program, which can only be used to purchase food, as feeding needy Americans at a time of high unemployment and great poverty. Republicans, for their part, argue that the programme is rife with fraud, that its recipients (who are mostly single mothers) are lazy and shiftless, and that we must make drastic cuts to reduce government spending. Their most Dickensian argument is that if you feed the poor, they won’t want to work.

But as the New York Times economic columnist Paul Krugman has repeatedly pointed out, welfare entitlements, including the food debit card, are not only good for families; they also good for the economy.  People who receive such help spend the money immediately. Single mother hold down multiple jobs at minimum wages to keep their family together. The debit card allows them to go shopping and to buy needed groceries. Such entitlements boost spending and the economy, rather than depleting it.

Despite these arguments, the cuts have already begun. On November 1, 2013, Congress cut nearly five billion dollars from SNAP and Republicans now want to cut another $40 billion dollars. The stalemate has resulted in the failure of Congress to pass the farm bill, which provides SNAP subsidies to farms, mostly of which are large agricultural corporations.

Meanwhile, poverty grows, the stock market zooms to new heights, the wealth of the 1% increases, and corporate executives continue to get tax exemptions for business entertainment expenses, which allow corporations to deduct 50% of these costs from their annual taxes.

In all this discussion, the real face of poverty - single mothers - has strangely disappeared. Welfare policy in America has always favored mothers and children. In a country that values self-sufficiency and glorifies individualism, Americans have viewed men - except war veterans - as capable of caring for themselves, or part of the undeserving poor. Women, by contrast, were always viewed as mothers with dependents, people to be cared for and protected precisely because they are vulnerable and raise the next generation.

As I read dozens of think tank and government reports, and newspaper stories however, I am surprised to notice that even strong opponents of the cuts describe SNAP’s recipients as children, teenagers, seniors or the disabled. Why have single mothers disappeared from such accounts about the poor?  There are plenty of “needy families,” “households,” and “poor Americans,” but the real face of poverty and the actual recipients of food assistance are single mothers, whose faces have been absorbed by the more abstract language of “poor Americans” and “needy households.”

Even the strongest opponents of these cuts don’t focus on women or mothers. Instead they publicize pinched-faced children - a better poster image - staring hungrily at food they cannot eat. Or, they discuss the public health impact these cuts may have on children. According to most reports, even from the Agriculture Department, “children and teenagers” make up almost half of the recipients of food assistance. But they don’t mention the mothers who receive this assistance in order to feed those children and teenagers. From the stories about food stamps, you’d think that only children, teenagers, the elderly and the disabled have gone hungry.

The words “women” or even “mothers” rarely appear. In a powerful column against the cuts, the liberal and compassionate  New York Times columnist Nicholas Kristof, for example, argued that “two-thirds of recipients are children, elderly or disabled” and warned his readers about the long-range impact of malnourished children. He, too, never mentioned women, who are the main adult recipients of the SNAP program and who feed those children, elderly or disabled. Nor did he point out that those who apply for such assistance are the mothers and women who seek to nourish these children. It’s as though women are simply vehicles - not persons - in the reproduction process of the human race.

Yet the reality tells a different story. In 2010, for example, 42 percent of single mothers relied on SNAP; and in rural areas, the rate often rose as high as one half of all single mothers. What’s missing from this picture - on both sides - is the real faces of hunger, which is not “needy” families, or “poor Americans", but single mothers with “food insecurity” for themselves and their families. According to the Center for Budget Priorities, women are twice as likely to use food stamps as anyone else in the population. They are the ones who apply for the SNAP debit card, go shopping, takes buses for hours to find discounted food supplies, and try to stretch their food to last throughout the month for their children, teenagers and, less often, husbands. They are the pregnant women with older children whose infants are born malnourished, and the “Americans” who, at the end of the month, make hasty runs to relatives, food banks and even join other dumpster divers.

When journalists do focus on the women who are recipients of food assistance, they discover a nightmare hiding in plain sight.  These women are either unemployed, under-employed or service workers who don’t earn enough to feed themselves and their families. By the end of the month, they and their children frequently often skip meals or eat one meal a day until the next month’s SNAP assistant arrives

So why have women disappeared from a fierce national debate over who deserves food assistance? I’m not actually sure. Perhaps it is because so many adult women, like men, now work in the labour force and are viewed as individuals who should take care of themselves. Perhaps it is because Republicans find women’s appetite, as opposed to that of children, an embarrassment, hinting of sexual desire. Perhaps it is because this is part of the Republican war on women’s reproductive freedom: a single mother with children is somehow guilty of bringing on her own poverty.

Whatever the reason, the rhetoric does not match the reality. Once in while, the media publishes or broadcasts a “human interest” story that gives poor women a face” “It is late October,” one reporter begins, “so Adrianne Flowers is out of money to buy food for her family. Feeding five kids is expensive, and the roughly $600 in food stamps she gets from the federal government never lasts the whole month. "I'm barely making it," said the 31-year-old Washington, D.C., resident and single mother.” End of story. On to weather and the sports.

For the most part, however, poor women remain invisible, even as the mothers who feed the children, teenagers, elderly and disable who live with them. They do not elicit compassion. If anything, they are ignored or regarded with contempt.

Whatever the reason, Americans are having a national debate about poor and needy Americans without addressing the very group whose poverty is the greatest. The result is that we are turning poor, single mothers, who are 85% of all single parents, into a newly invisible and undeserving group of recipients.

Republicans may view single mothers as sinful parasites who don’t deserve food assistance. But behind every hungry child, teenager and elderly person is a hungry mother who is exhausted from trying to keep her family together. Women who receive food assistance are neither invisible nor undeserving. They are working-class heroes who work hard -often at several minimal wage jobs - to keep their families nourished and together.

[Ruth Rosen, a journalist and historian, is professor emerita of history at the University of California, Davis and a visiting professor of public policy and history at UC Berkeley. For 11 years, she wrote op-ed columns for the Los Angeles Times, and from 2000-2004 she worked full-time as a political columnist and editorial page writer at the San Francisco Chronicle.]