In Memory of Dr. King: Stand Up for those Without Work

On the line are the lives of decent hardworking Americans, trying to cross over into the dignity of work but still caught in the barbwire of an historic global recession. The jobless rate for young African Americans (16-19 years old) was 35.5 percent in December. 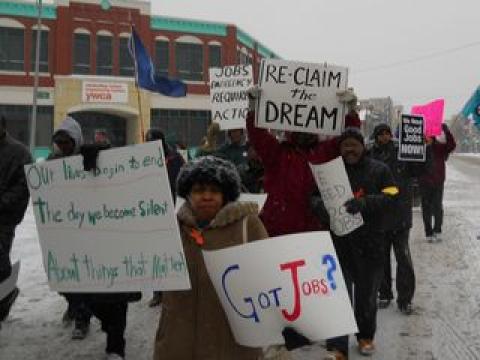 The December unemployment statistics have come and been pondered. The jobless rate declined from 7.0 percent to 6.7 percent over the month, the lowest it's been since President Obama took office. Some commentators took that to indicate significant progress and the White House eagerly touted the figures. However, most economists agreed that the decrease in the official percentage rate is mostly due to the fact that the number of people actually working and actively looking for work continues to shrink.

While 74,000 new jobs came on line in December a smaller percentage of workers over 16 years old have jobs than at any time in the last 30 years.

The unemployment rate for African American workers fell from 12.5 percent in November to 11.9 percent in December. Some media observers chalked this decease up to progress in the jobs picture for the black community. The real picture taken from the Labor Department report is quite different and alarming.

The percentage decline in the jobless rate is "almost entirely due to people leaving the labor force as the number of people reported employed in December only rose by 143,000, just enough to keep the employment-to-population ratio constant," observed Dean Baker, co-director of the Center for Economic and Policy Research. "Blacks disproportionately left the labor market, with the labor force participation rate for African Americans dropping by 0.3 percentage points to 60.2 percent, the lowest rate since December of 1977. The rate for African American men fell 0.7 pp to 65.6 percent, the lowest on record."

The jobless rate for young African Americans (16-19 years old) was 38.2 at the beginning of last year and fluctuated up and down a few points over the following months. It dipped from 35.7percent in November to 35.5 percent in December.

Shierholz continued, "For African American workers, the employment situation is significantly worse. The 2013 unemployment rate for blacks was 13.1 percent, far higher than the highest overall annual unemployment rate over the last 70 years. An estimated 19.6 percent of black workers (nearly one in five) were unemployed at some point in 2013. Furthermore, given unemployment projections for 2014, it is likely that 17.4 percent of black workers will be unemployed at some point this year. The labor market is improving extremely slowly for all major groups, but the employment situation of African Americans remains at something more akin to depression-level conditions."

The statistics released by the Labor Department this month were not bad news for everyone. Persistently high joblessness and the size of the "reserve army of the unemployed," (described by Karl Marx in 1867) have predictable results: low wages. "With the amount of slack in the labor market, we do not anticipate any substantial acceleration in wage growth for quite some time," said Ethan Harris, co-head of global economics research at Bank of America Merrill Lynch.

Average hourly earnings adjusted for inflation fell 0.3 percent last month to about where they were a year ago.

"I'm certainly hopeful that the December number will be good for African-Americans," Congressional Black Caucus Chairperson Marcia Fudge told BET.com. She said he hoped she could be more optimistic about the jobless rate in African-American and other communities of color. "In every single report, African-Americans have lagged behind everybody else. So I'm just hopeful that we don't fall any further behind than we already are. But I know that we need to do more, no matter what the numbers show, to target communities of color and high poverty to make sure we can get them back to work."

"More than 50 years after Dr. King and others marched on Washington for jobs and freedom, African-Americans remain disproportionately unemployed and impoverished," Rev. Raphael Warnock, senior pastor of Ebenezer Baptist Church in Atlanta told CNN January 10. He continued, "Yet the fact is the black unemployment rate will undoubtedly increase if extended unemployment insurance is cut off now, adding to the devastating impact that rampant unemployment has already had on the black community for decades. And given our nation's shifting demographics, that's bad for everybody.

"Congress' inaction to extend unemployment benefits to millions of struggling Americans is not only irresponsible policy, it is morally wrong, said Warnock. "Congress, the elected representatives of the people, must find its moral compass, push through this unending nightmare of political gridlock and do right by the people."

Contrary to the silly and obsessive partisan gamesmanship that currently paralyzes our politics, much more is at stake than the next election or some empty ideological argument. On the line are the lives of decent hardworking Americans, trying to cross over into the dignity of work but still caught in the barbwire of an historic global recession.

Faith leaders, particularly pastors in the African-American churches, "should speak up too, said Rev. Warnock. "Because black unemployment is twice that of whites and has been for as long as the Bureau of Labor Statistics has been keeping track by race, we have an obligation to honor our historic reason for being -- defending those on the margins of the margins.

As we celebrate the life of the most famous black pastor, Martin Luther King Jr., we should remember that the black church mission connects faith with justice and personal salvation with social transformation, and addresses personal piety and public policy for the well-being of the whole person and the whole community. It fights for the weak and sees the Gospel as "good news to the poor."

"If we really want to honor Dr. King and protect the American promise, we must demand that Congress do the right thing for American workers and the right thing for the American economy, said Rev. Warnock. "Do not shrink a struggling  economy, putting us all at risk. Rather, extend the safety net of unemployment insurance to those who cannot help but stimulate the economy by spending it immediately on the basics of food, gas and medicine, even as we debate the best prescription for long term economic health."

(1) raise the minimum wage at least to its inflation-adjusted value 40 years ago - which would be well over $10 an hour,

(2) extend unemployment benefits to the jobless,

(4) expand Medicaid to the near-poor,

(6) rehire all the teachers, social workers, police, and other public service employees who were laid off in the recession,

(7) exempt the first $20,000 of income from Social Security payroll taxes and make up the difference by removing the cap on income subject to the tax.

"One of the major political parties adamantly refuses to do any of this, and the other doesn't have the strength or backbone to make them," writes economist Reich, admonishing us to "Make a ruckus."

The problem is that there seems to be little evidence of much of a ruckus getting started. Liberal, labor and progressive organizations and media outlets do a persistently good job of exposing the unemployment crisis. Left groups frequently take note of the situation and then move on to other things. Meanwhile, more and more women and men move into the ranks of the long-term jobless and many young workers, especially those in people of color communities, find their ability to even enter the workforce limited. And, now over a million people have suddenly found themselves cut off from government assistance and facing the New Year wondering what ever happened to "hope."

[BlackCommentator.com Editorial Board member and Columnist Carl Bloice is a writer in San Francisco, a member of the National Coordinating Committee of the Committees of Correspondence for Democracy and Socialism and formerly worked for a healthcare union. Bloice is one of the moderators of Portside. Other Carl Bloice writing can be found at leftmargin.wordpress.com]