As burgeoning labor group and Franklin-based CHS grow, so do their differences. 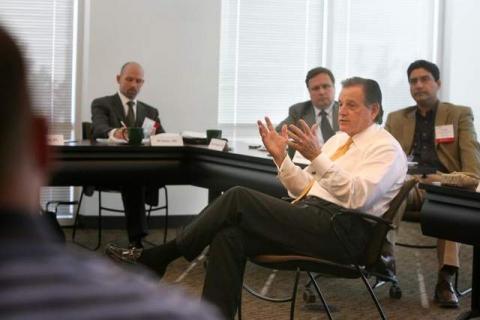 Wayne Smith, CEO of Franklin-based Community Health Systems, speaks to a group of physicians from around the country in November 2009. CHS now owns, leases or operates 206 hospitals across the U.S. — more than any other for-profit chain in the country., Jeanne Reasonover
The 185,000-member National Nurses United labor union last month claimed that management at two California hospitals owned by Franklin-based Community Health Systems wrongfully terminated nurses who also were union members and had been outspoken on labor issues.
In response to the accusation that the company fired nurses unfairly, CHS spokeswoman Tomi Galin said, “The hospitals terminated the employees for causes related to issues around patient care and safety.”
This latest confrontation between National Nurses United and Community Health Systems looks to be one piece of a larger fight.
CHS and the nurses union have grown more powerful in recent years. CHS recently closed a $7.6 billion purchase of Florida-based hospital chain Health Management Associates. It now owns, leases or operates 206 hospitals across the U.S. — more than any other for-profit chain in the country.
Most of the company’s workers do not belong to unions. Before the HMA merger, 8,000 of Community Health Systems’ 96,000 employees elected union representation.
National Nurses United also is gaining mass.
The California Nurses Association in 2009 joined forces with other labor groups including the Massachusetts Nurses Association and United American Nurses to form the largest professional nurses association in the country. The NNU is growing when national union membership is declining. According to the U.S. Bureau of Labor Statistics, 11.3 percent of wage and salary workers were union members in 2012, compared with 1983, when more than 20 percent of the workforce belonged to a union.
Demand for nurses spurs union growth
The NNU has gained such strength, in part, because national demand for nurses is growing. The Bureau of Labor Statistics predicts the health care industry will add 3.2 million new jobs between 2008 and 2018. Nurses are a pivotal part of the health care sector. The nursing workforce grew “substantially” in the 2000s, according to a 2010 report by the Department of Health and Human Services, which said that the country added 500,000 registered nurses within that time frame, an increase of 24.1 percent from the previous decade.
Relative to other nurses unions, the NNU is aggressive when it comes to gaining clout among a growing slice of the workforce.
“That’s part of the reason for their success,” said Paul Clark, a professor and head of Penn State University’s Labor Studies and Employment Relations department.
“They’re very militant, they’re very strong and they’re very effective,” he said. “They organized in California and were so successful that they started spreading across the country.”
One of the group’s major legal victories happened in 2004, when the group, then the California Nurses Association, backed a state law mandating minimum nurse-to-patient ratios. The bill passed, and the union is now advocating for a similar national law.
It also is confronting CHS on several fronts.
For example, it organized a group of protesters to rally outside of a January meeting of HMA shareholders who were voting on the CHS deal. The union’s goal was to block the merger, claiming that the quality of hospitals would decline should CHS take over. Still, HMA shareholders approved the merger and the Federal Trade Commission cleared it on Jan. 23. As for a decline in the hospitals’ operational quality, it’s difficult to compare, since, according to NNU Communications Director Charles Idelson, the group did not have representation at HMA-owned facilities.
Though the merger went through, the union has won a handful of court victories against CHS.
In 2013, three complaints the union reported to the National Labor Relations Board resulted in injunctions against CHS-owned hospitals.
For two of those injunctions, the court ruled that CHS must negotiate with union-affiliated nurses in good faith. In another case, the court required CHS to reinstate a nurse and union member whom management at a CHS-owned hospital had fired. The union claims the nurse was fired for her union activity. CHS representatives deny the claim.
Regarding these injunctions, Galin said: “These hospitals have complied with these orders, and numerous bargaining sessions with the (NNU) have taken place over the past several months at the California hospitals. The Ohio hospital, where the injunction was just issued, has proposed dates to commence bargaining.”
Not good for image
While these injunctions pose no financial harm to the company, which earns more than $13 billion in annual revenue, the image of a for-profit chain locked in combat with unionized nurses is one that CHS would probably like to avoid, Penn State’s Clark said.
“While most nurses unions — including the California Nurses — fight for better pay and benefits, nurses unions are a little unusual in that they fight just as hard for issues related to nurses’ abilities to provide good care for their patients,” he said. “Nurses are nothing if not patient advocates.”
CHS says it provides a safe environment for nurses to care for patients.
“Our overall employee satisfaction for 2013 is 85 percent,” Galin said, adding that “88 percent of employees surveyed said they are proud to be a part of the organization and 93 percent agreed that patients are treated as valued customers.”
National Nurses United, however, has pegged CHS as a problem operator and will continue to push against perceived violations of nurses’ rights.
“We don’t cut side deals with management the way that some organizations do,” Idelson said. “This organization’s perspective is that we’re an advocate for the public or the nurses but not for corporate employers.”
CHS’ conflict with the union involves two organizations with different incentives, both of which claim they aim to treat patients well. The real question is whether clashes such as this one will ultimately result in better patient care.
Reach Shelley DuBois at 615-259-8241 and on Twitter at @shelleydubois.