George Goehl and National People’s Action spent the last 6 years developing a new organizing strategy. The organization now commits itself to a vision of a “new economy”: democratic and public control of finance, and cooperative and alternative forms of business ownership. NPA also envisions giving workers real decision-making power within corporations and giving the public the right to revoke the charters of corporations that provide too little social value. 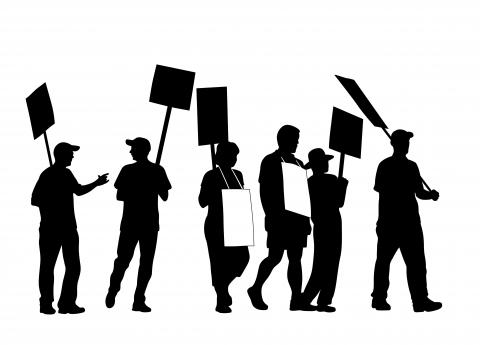 As a hungry young drifter who had only recently (and barely) finished high school in the late 1980s, George Goehl (pronounced “gale”) got by with a little help from a free soup kitchen in Bloomington, Ind. A few years later, that kitchen served as the launching pad for his dynamic career as a community organizer. For the past six years, as executive director of the community-organizing network National People’s Action (NPA), Goehl has spurred a rapid growth. More important, he is spearheading a dramatic transformation of NPA’s strategy and goals—while helping to unleash more of the progressive potential of the large and uniquely American community organizing movement.

Goehl’s first political awakening came after he had returned to the soup kitchen as a volunteer in 1990. One day, it hit him that many of the patrons from years earlier were still regulars: The kitchen, part of our country’s tattered safety net, had kept them alive, but it had not reduced poverty, generally or individually. He began discussing the root causes of poverty with the kitchen’s patrons. Then, with tips from a mentor he met at a tenants’ organizing conference, he transformed the talkfest into the Coalition of Low-Income and Homeless Citizens. His work caught the attention of Shel Trapp, an organizer and a disciple of Saul Alinsky, the founder of modern community organizing.

Trapp recruited Goehl to study the craft in Chicago’s hard-pressed West Side neighborhoods in 1996. Goehl dutifully learned the commandments of traditional Chicago-style community organizing: Don’t talk ideology, just issues. No electoral politics. Build organizations, not movements. No coalitions: Protect organizational turf. Focus on neighborhoods and on concrete, winnable goals. Goehl quickly recruited hundreds of new members to Blocks Together, then an allied organization of National People’s Action, his first association with the multi-state network of community groups founded in 1972 by Trapp and the brilliant neighborhood leader Gale Cincotta.

NPA won widespread admiration for its 1977 success in getting Congress to pass the Community Reinvestment Act, which prevented banks from engaging in the practice known as redlining: disinvesting in poorer, seemingly riskier neighborhoods. But Goehl grew frustrated with the limits to his community organizing work. He thought that NPA had become too preoccupied with enforcing its landmark legislative victory and had failed to press onward to bigger goals, such as breaking up the banks or further regulating the industry.

And Goehl grew frustrated, too, with Alinsky-style organizing. Community organizing was dominated by several large networks, each with its own training centers, styles and goals, which had accomplished a lot: helping members deal with local problems and sometimes tackling bigger issues such as homeownership, energy policies or healthcare. But Goehl, like many other critics, thought that these community organizations lacked the ambition, vision, strategy and full arsenal of political weapons needed to roll back decades of corporate conservative victories and to create a more democratic economy and government. One big flaw in traditional organizing was that it was “designed to win the best things possible for a landscape we had not created,” Goehl says.

Goehl left NPA in 2004 for a stint as an organizer for the Fair Immigration Reform Movement (FIRM). There, he had a second political awakening: “A lot of people came in [to immigrant rights organizing] with a political analysis first, then [learned] organizing,” Goehl says. “For me, my politics developed after my organizing skills. I would be in a room like this”—he gestures to the spartan basement of the NPA’s national headquarters in Chicago—“and almost all of the organizers were immigrants, and their ideas around movements, strategy and political analysis were so different from anything I’d experienced in the Chicago school of organizing— so much more expansive, broad and complicated.” At FIRM, Goehl began to understand the value of flexibility in adopting new tactics and strategies, as well as collaborating with different groups to build movements.

When Goehl returned to NPA six years ago as executive director, he found most of his staff and community leaders open to a bolder strategy. That ambition inspired new affiliations and new organizing, helping NPA’s membership leap to about 90,000 members in 30 groups across 14 states, he says. But Goehl doesn’t think growth alone will enable community groups to rival the networks built by the corporate Right. To win game-changing victories they also need more alliances (with progressive issue groups, unions and other community organizing networks, for example) and a stronger progressive infrastructure (more varied and potent communications strategies and funding sources, including more member donations to end overreliance on foundations).

At the same time, Goehl stresses that the NPA must retain what he sees as the soul of its tradition: “the willingness to challenge corporate power and both parties, [to take] direct action to transform power and transform the human spirit, and to organize from the bottom up.”

With these ideas in mind and with assistance from Richard Healey, a consultant with the nonprofit Grassroots Policy Project, Goehl and the NPA spent the last six years developing a new strategy that the group adopted at its April 2013 convention. The crux: The NPA is no longer satisfied with protesting the powerful and aims to help the powerless take the reins instead— through elections, and also through greater worker decision-making power in workplaces. And it is thinking not just in months or years, but in decades.

The organization now commits itself to a vision of a “new economy”: democratic and public control of finance, and cooperative and alternative forms of business ownership. Beyond using cooperatives to show how worker-run economic alternatives are viable, NPA also envisions giving workers real decision-making power within corporations and giving the public the right to revoke the charters of corporations that provide too little social value.

NPA wants to directly challenge the conservative ideas that limit the American political imagination, such as hyper-individualism, market fetishism and hostility not only to socialism and other alternatives to capitalism, but to government itself. It also emphasizes the need to eliminate the structural racism that impedes any strategy to address inequality. Although “NPA has always worked to advance racial justice,” Goehl explains, it must eradicate any barriers to leadership by people of color within NPA.

“If we fail to win the battle of big ideas, we fail,” Goehl says.

To spread these big ideas and pave the way for a new future, the group plans to advocate concrete structural reforms that shift power from corporations to people. These might include, for example, “democratizing money” by establishing state banks like North Dakota’s or reforming the rules of electoral politics—“people in, money out”—as some statewide affiliates are trying to do. The idea is that, as these structural reforms accumulate, they will lead to a transformation of society, ushering in a new social and economic egalitarianism. A major upcoming NPA campaign will focus on raising tax revenue for local, state and federal governments through a financial transaction tax. When anti-tax crusaders claim the country can’t afford higher taxes, Goehl’s rejoinder is, “We found the money, and it’s not in Grandma’s pension or our children’s classrooms, but on Wall Street.”

While traditional community organizations eschewed electoral politics—unless it was simply to confront an elected official—many have now ventured into direct electoral waters, even endorsing candidates and mobilizing voters for them (as the progressive coalition USAction does). The NPA has established a separate nonprofit 501(c)4 arm, called the National People's Action Campaign (NPAC), to engage in everything from legislative advocacy to registering voters, and even running candidates.

TakeAction Minnesota, an NPA affiliate with an active electoral politics arm, provides an example of how NPAC may operate. Like many progressive groups, NPAC hopes to be independent of the two big parties but has no plans to form a third party. Being politically independent, says Dan McGrath, executive director of TakeAction Minnesota, means that candidates for office must be accountable to grassroots members instead of party leaders. TakeAction also has been independently nurturing its own candidates to run in primaries or general elections. Ultimately, Goehl says, the Democratic Party will be “the field of struggle” for most of NPAC’s political candidates, since the Republican Party’s terrain is so far right.

TakeAction Minnesota won a big victory in 2012 when it helped defeat a supposedly slam-dunk referendum that would have required voters to show a photo identification card. This fall, a city council member and longtime TakeAction Minnesota activist, Betsy Hodges, was elected mayor of Minneapolis. Her campaign stressed the need for racial and ethnic equality, and used community organizing tactics to defeat former Hennepin County Commissioner Mark Andrew, the candidate favored by many Democratic Farmer Labor Party leaders (even though the party made no endorsement) and by most of the city’s labor unions (except SEIU). That split underscores why a leader in another network, who spoke off the record, thinks that NPA needs to learn how to work more closely with the labor movement to forge common strategies as early as possible.

The ambitious and long-range strategy of Goehl and NPA could greatly alter the progressive movement as a whole, both by adding heft to existing campaigns—for a financial transaction tax, for example—and by initiating new ones.

However, the NPA has its work cut out for it. NPA’s intent to shift power through a series of reforms is appealing, but it is often difficult to develop campaigns that meet all the ideal criteria of structural reform. The nation’s big corporations had a decades- long approach not only to changing policy but also to winning the “battle of big ideas,” in Goehl’s terms. It was certainly easier for corporations with great power to launch a 40-year campaign to regain what little they lost in the progressive reforms of the 1960s and the 1930s, than it will be for progressives to execute a long-term strategy to dethrone the corporations and other concentrations of power and money. But NPA’s work on such plans offers both a counterpoint to the short-term thinking that too often shapes the progressive agenda, and a template for how progressives can make greater gains—perhaps on the scale of the New Deal—as opportune moments arise, whether they are crises like the Great Recession (when many opportunities were missed) or the growing reaction now against extreme inequality.

“The biggest challenge is also the biggest opportunity,” Goehl says. “So many people—black, white, Latino, Asian—are being pushed down by the current economic order. If there was ever an opportunity for people to get on the same page and go after the real culprits, this is it.” Goehl hopes the organizational grandchildren of Alinsky will move from neighborhoods to national challenges. “Now community organizations not only can win policy campaigns,” he says. “They can change the country.”