The Apartheid of Children's Literature

Of 3,200 children's books published in 2013, just 93 were about black people, according to a study by the Cooperative Children's Book Center at the University of Wisconsin. 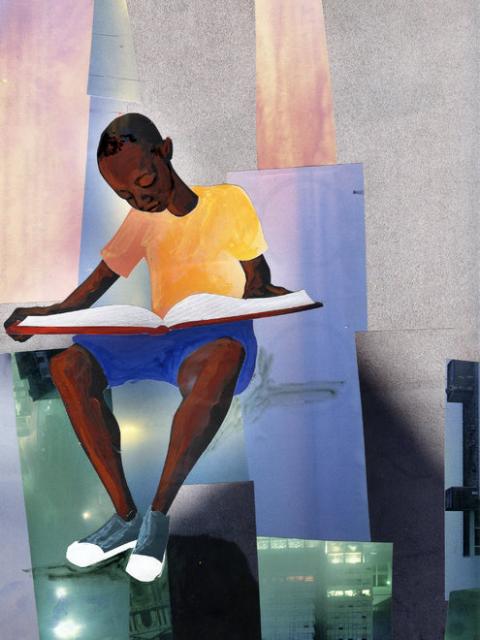 I'm talking with a boy. He's at that age when the edges of the man he will become are just starting to press against his baby-round face. He's got his first opinions and ideas and jokes, which are horrible, because there is nothing that boys his age love more than corny jokes. There is a whole industry of knock-knock-joke books for boys this age. Everything about him is gangly; his voice and his limbs fit awkwardly, like hand-me-downs. He's young enough that his smile is easy, and he is the kind of boy who finds reasons to smile in everything: the cracking of his voice, a fire-engine siren, the fact that a grown-up is talking to him and listening to what he says. When I talk with kids like this, our conversations always seem to go the same way:

"So you're telling me these are all the books published last year for kids?" they ask me. "That's a lot of books. That's more books than I could read in a year."

"And in all of those thousands of books, I'm just not in them?"

"Are there books about talking animals?"

"And superpowers? And the olden days when people dressed funny? And all the combinations of those things? Like talking animals with superpowers in magical futures ... but no me?"

I would like to have a proper enemy in this story - preferably a snide villain with a cape and a British accent and a posh cat or a ferret. With my unique history - two generations in the business of caring for kids with words and pictures - I would be the James Bond/Black Dynamite of children's literature and foil this nefarious conspiracy. But, unfortunately, this story is more truth than fiction, and the villain here is elusive.

The mission statements of major publishers are littered with intentions, with their commitments to diversity, to imagination, to multiculturalism, ostensibly to create opportunities for children to learn about and understand their importance in their respective worlds. During my years of making children's books, I've heard editors and publishers bemoan the dismal statistics, and promote this or that program that demonstrates their company's "commitment to diversity." With so much reassurance, it is hard to point fingers, but there are numbers and truths that stand in stark contrast to the reassurances. The business of children's literature enjoys ever more success, sparking multiple movie franchises and crossover readership, even as representations of young people of color are harder and harder to find.

This apartheid of literature - in which characters of color are limited to the townships of occasional historical books that concern themselves with the legacies of civil rights and slavery but are never given a pass card to traverse the lands of adventure, curiosity, imagination or personal growth - has two effects.

One is a gap in the much-written-about sense of self-love that comes from recognizing oneself in a text, from the understanding that your life and lives of people like you are worthy of being told, thought about, discussed and even celebrated. Academics and educators talk about self-esteem and self-worth when they think of books in this way, as mirrors that affirm readers' own identities. I believe that this is important, but I wonder if this idea is too adult and self-concerned, imagining young readers as legions of wicked queens asking magic mirrors to affirm that they are indeed "the fairest of them all."

The children I know, the ones I meet in school visits, in juvenile detention facilities like the Cheltenham Youth Facility in Maryland, in ritzy private schools in Connecticut, in cobbled-together learning centers like the Red Rose School in Kibera, Nairobi - these children are much more outward looking. They see books less as mirrors and more as maps. They are indeed searching for their place in the world, but they are also deciding where they want to go. They create, through the stories they're given, an atlas of their world, of their relationships to others, of their possible destinations.

We adults - parents, authors, illustrators and publishers - give them in each book a world of supposedly boundless imagination that can delineate the most ornate geographies, and yet too often today's books remain blind to the everyday reality of thousands of children. Children of color remain outside the boundaries of imagination. The cartography we create with this literature is flawed.

Perhaps this exclusivity, in which children of color are at best background characters, and more often than not absent, is in fact part of the imaginative aspect of these books. But what it means is that when kids today face the realities of our world, our global economies, our integrations and overlappings, they all do so without a proper map. They are navigating the streets and avenues of their lives with an inadequate, outdated chart, and we wonder why they feel lost. They are threatened by difference, and desperately try to wish the world into some more familiar form. As for children of color, they recognize the boundaries being imposed upon their imaginations, and are certain to imagine themselves well within the borders they are offered, to color themselves inside the lines.

At a public school in Southeast Washington, D.C., I ask a fifth grader what he wants to do with his life, what the map is that he has drawn for himself. He is talkative and smart, and his high-top fade adds a few extra inches to his height, so that he is almost as tall as his classmates, and far more stylish. He tells me that he will join the N.B.A., and use that money to buy a recording studio and record his first rap album. Looking at him, I think that these are not necessarily his dreams; they are just the dreams that have been offered him, the places he can go in the narrow geography that has been delineated for him, strung along in a surreal and improbable sequence.

As much as I hope that I'm wrong, that in several years the Brooklyn Nets sign a 5-foot-8 point guard with amazing flow, who raps and hoops in the same arenas, I think it's necessary to provide for boys and girls like him a more expansive landscape upon which to dream.

"Who would stand in the way of such a thing?" I've asked this question of industry folks, of booksellers, of my father, who's been fighting this battle since before I picked up my first words. The closest I can get to the orchestrator of the plot - my villain with his ferret - is The Market. Which I think is what they all point to because The Market is so comfortably intangible that no one is worried I will go knocking down any doors. The Market, I am told, just doesn't demand this kind of book, doesn't want book covers to look this or that way, and so the representative from (insert major bookselling company here) has asked that we have only text on the book cover because white kids won't buy a book with a black kid on the cover - or so The Market says, despite millions of music albums that are sold in just that way.

I remember my first encounter with The Market when I was a kid. My father once wrote a story about Dr. Cosmos, a talking chimpanzee who wore a sequined turban, and some kids from Harlem who were matching pets to people by their astrological signs. I remember Pop coming home disappointed after he was told that the story would not be published, because astrology, the occult, witchcraft and the like would not sell - or so The Market had dictated. You could draw a map of the places around the country where they said such a book would languish on the shelves and even incur protests and boycotts.

This injunction against the occult in children's literature was presented as an unwritten rule for quite some time. That is, until a number of years later, when a certain wizard came along, and vampires, witches, werewolves and Greek gods, and all manner of magical beings soon followed. Perhaps the wizard and all his supernatural kin were able to elude the dictates of The Market because they had magic wands and powers. Or perhaps the imagination of publishers, parents, teachers, editors, librarians and book buyers, these people who care so much for children and literature and believe in good stories told well, in cartographies that have no blind spots, was much more important, in the end, than that unwritten rule put forth by The Market, that backward segregated map that has led us to this dismal place.

So now to do my part - because I can draw a map as well as anybody. I'm talking with a girl. She's at that age where the edges of the woman she will become are just starting to press against her baby-round face, and I will make a fantastic world, a cartography of all the places a girl like her can go, and put it in a book. The rest of the work lies in the imagination of everyone else along the way, the publishers, librarians, teachers, parents, and all of us, to put that book in her hands.

[Christopher Myers is an author and illustrator of books for children and young adults, including "Harlem" and other collaborations with his father.]