Most people know Charlie Chaplin, whose 125th birthday was April 16, as a giant figure in the history of film. Chaplin's films were as funny as they were deeply revelatory of the human condition. His raucous cinematic assault on fascism, discussed here, helps enrich our understanding about what made this clown one of our most sublime and important artists. 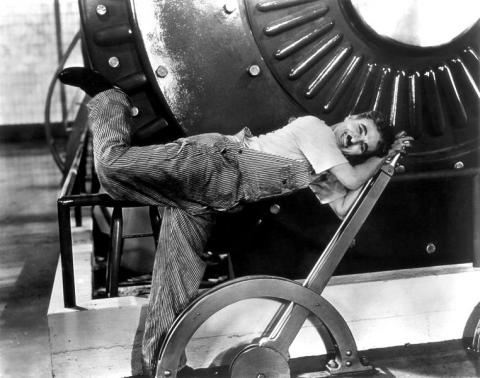 The Tramp working on the giant machine in the most famous scene from Modern Times., Wikimedia Commons

While the actor is best known for his slapstick silent movies featuring the well-meaning vagabond, Chaplin's progressive legacy is less familiar to folks these days, even though his first all-talking film features what is perhaps cinema's greatest political speech to date.

"Soldiers, don't give yourselves to brutes, men who despise you and enslave you, who regiment your lives, tell you what to do, what to think and what to feel, who drill you, diet you, treat you as cattle, as cannon fodder," he roared in the 1940 film "The Great Dictator." "Don't give yourselves to these unnatural men, machine men, with machine minds and machine hearts! You are not machines. You are not cattle. You are men! You have the love of humanity in your hearts! You don't hate. Only the unloved hate. Soldiers, don't fight for slavery, fight for liberty!"

That performance lives on even today thanks to the viral nature of social media. A re-edited version of Chaplin's speech in "The Great Dictator" went on to score over 13 million viewers on YouTube in 2011, under the title "The Greatest Speech Ever Made."

Watch: The Greatest Speech Ever Made 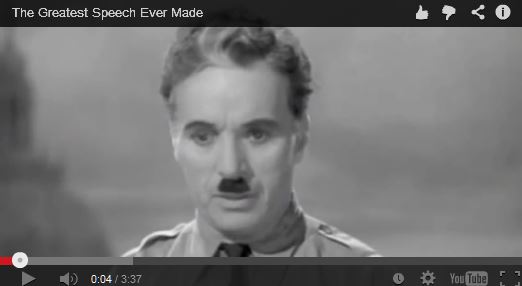 Compelling as that may be, the true weight of Chaplin's progressive legacy seems to have been forgotten in popular Hollywood lore. He is instead best associated with cane-twirling comedic antics, and little else.

However, "The Great Dictator" marked the end of Chaplin's Tramp. In that film, he plays a dual role: Adenoid Hynkel, the tyrant of Tomania, and a humble Jewish barber victimized by the rise of fascism. While this undertaking may not sound controversial today, it made huge waves in 1940 because Chaplin broke two taboos with one cinematic stone, taking on Adolf Hitler directly and portraying a Jewish protagonist on the silver screen.

The satirical masterpiece is full of hilarious scenes ridiculing fascism, inter-cut with the increasingly desperate plight of the Jews, including the Barber's sweetheart Hannah, played by Paulette Goddard. "The Great Dictator" concludes with Hynkel invading what's supposed to be Austria, but the Jewish Barber, who resembles Hynkel (Chaplin used to quip, "Hitler stole my mustache!"), is mistaken for the dictator and asked to address the masses at a Nuremberg-type rally. That's when Chaplin's little Jewish character delivers his impassioned cinematic sermon on the mount.

By using the power of movie mockery, Chaplin showed that Hollywood could cut the fascist behemoths down to size. It's impossible to grasp the full impact of "The Great Dictator," which noted film critic Bosley Crowther called "perhaps the most significant film ever produced." It ultimately scored five Oscar nominations, including Best Picture and Best Actor.

Although Chaplin was not a Jew, his wife was, and so was his half-brother Sydney. By association, and largely due to Chaplin's portrayal of a Jewish protagonist, the rightwingers of his day savagely attacked him with anti-Semetic rhetoric. Chaplin, however, did not bother to correct them. By not denying he was Jewish, Chaplin publicly conferred the status of the most popular star in the world at the time upon the planet's most hyper-oppressed minority, right in the midst of the Nazis Party's genocidal "final solution."

But "The Great Dictator" was not Chaplin's first foray into the political issues of his day. While Chaplin never again wore the cane-twirling, mustachioed character's trademark baggy pants, tight coat, over-sized shoes and small derby hat in front of a camera, it was the Tramp that made his stunning achievement in "The Great Dictator" possible. It almost seems hard to believe that the Tramp's first appearance was a whole century ago, in Mack Sennett's short film "Kid Auto Races at Venice." 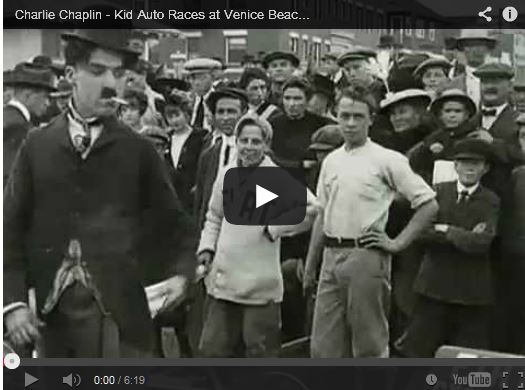 Although initially a bumbling vagabond prone to slapstick comedy, Chaplin's Tramp evolved through the years into a symbol of the underdog. Theatergoers could relate to this everyman's plight in silent movies like 1917's "The Immigrant," wherein the Tramp crosses the Atlantic in a boat bound for a new life in America. Chaplin made that very same journey in his younger years, fleeing the extreme poverty of England.

As the character grew and changed, Chaplin's Tramp often clashed with police and other authority figures to make a point about the most pressing social issues of the day. In 1921's heartbreaking "The Kid," for instance -- which drew water from Chaplin's troubled childhood -- he battles government officials who try to prevent him from raising an orphaned child played by Jackie Coogan, an actor best known for his depiction of "Uncle Fester" in "The Addams Family."

By 1936 and the release of "Modern Times," Chaplin's cane-twirling everyman rose to the status of a true proletarian, depicting an oppressed factory worker who is literally swallowed by assembly line machinery and fired, only to fall in love with a homeless waif. Together, the beleaguered couple struggle to survive during the Great Depression, giving a darkly comedic depiction of the abhorrent conditions working people faced in those days. 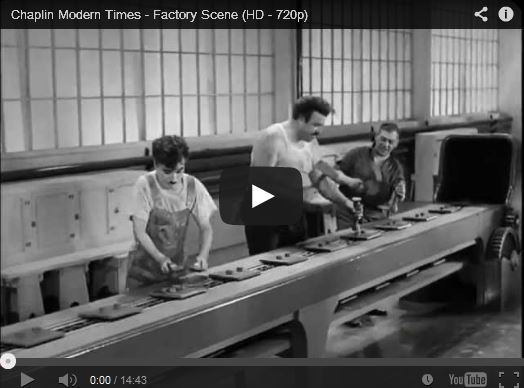 Chaplin's portrayal of the Jewish Barber in "The Great Dictator" is the apotheosis of the Little Tramp as an emblem of ordinary people. Although he retired his derby hat and big shoes in his few remaining films, Chaplin never stopped speaking out against injustice. He paid the price for this advocacy, too. So potent was his advocacy for the poor and oppressed that many rightwingers truly believed Chaplin was a communist, although he was not. As a result, Chaplin was relentlessly red-baited in the press, particularly after campaigning with the American Committee for Russian War Relief, which sought to help the Soviets during World War II.

By 1947 and the release of "Monsieur Verdoux," Chaplin's social commentary really began to sear conservatives. He was picketed by the Catholic Legion of Decency for playing a serial wife murderer who compares himself to world leaders. "As a mass killer, I am an amateur by comparison," he declared. 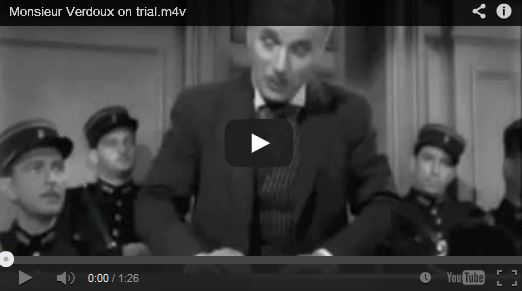 That same year, Chaplin was subpoenaed to testify before the House Un-American Activities Committee (HUAC), a precursor to the red-scare McCarthyism that dominated the 1950s. He was ultimately denied reentry to the U.S. in 1952 after attending the London premiere of "Limelight" -- a film that depicts a vaudevillian who loses his audience.

Chaplin ultimately settled in the neutral, democratic nation of Switzerland, where he directed two more feature films: 1957's "A King in New York," which took on McCarthyism, and his much-overlooked swan song, 1967's "A Countess from Hong Kong."

In "A King in New York," Chaplin's son Michael is forced to inform on his parents' allegedly un-American activities, and Chaplin himself is ultimately called before the HUAC. He scatters the committee's members in hilarious fashion by spraying them in their faces with a firehose. His final film, "A Countess from Hong Kong," features the great Marlon Brando giving up and walking away from his political ambitions to woo a down-on-her-luck Sophia Loren. "I'd rather be happy than be president," Brando declares.

Chaplin returned to the U.S. just once more after being blacklisted by Hollywood during the McCarthy-era, accepting an honorary Academy Award in 1972. He lived out the remainder of his life in Vevey, Switzerland, where Chaplin raised a large family with Eugene O'Neill's daughter Oona in his emeritus years, a woman he loved very dearly. Unlike the tyrant he spoofed in "The Great Dictator," Chaplin lived on to the ripe old age of 88.

While he may be gone, Chaplin's legacy lives on even today. Next year, his home above Lake Geneva will be converted to a museum, and later this month, Chaplin's only known novella, titled "Footlights," will finally see the light of day.

Despite the progressive activism many popular actors engage in these days, Hollywood will never have another star like Charlie Chaplin. He was a titan of the cinema, and a true hero to oppressed people everywhere. His influence is sorely missed.

[Ed Rampell is The Progressive's man in Hollywood and author of "The Hawaii Movie and Television Book," available now.]