Popular Movements Toward Socialism: Their Unity and Diversity

Samir Amin writes "the movement toward socialism" is a new stage in the decades old struggle of humankind for a more just and equitable society, since the time that Karl Marx and Friedrich Engels first wrote the Communist Manifesto in 1848. Introduction by the editors of Monthly Review on attempt to bring together a variety of global struggles under the rubric of the "movement toward socialism," 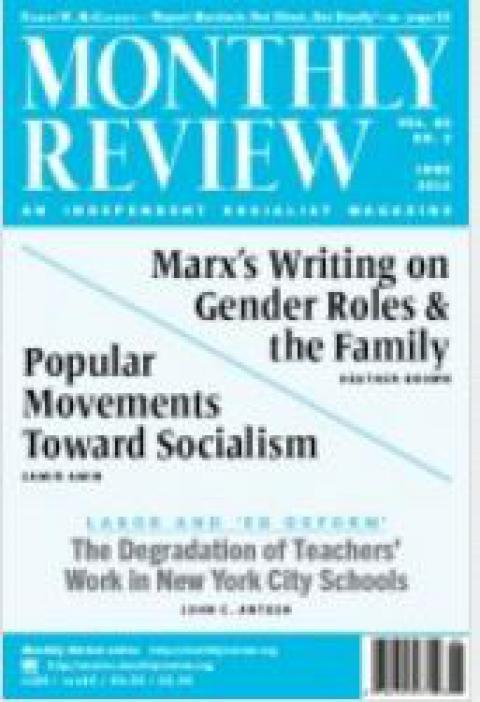 Samir Amin's Review of the Month - "Popular Movements Toward Socialism - in the June 2014 issue of Monthly Review., Monthly Review

Samir Amin's Review of the Month in this issue, "Popular Movements Toward Socialism," offers a masterful analysis of struggles all over the world in the era of what he calls "generalized-monopoly capitalism." The most important theoretical innovation in his article, in our opinion, is his attempt to bring together a variety of global struggles under the rubric of the "movement toward socialism," borrowing the terminology from the current practice of a number of South American parties: in Bolivia, Chile, and elsewhere. Movements that fall under this mantle, Amin suggests, may include those that seek to transcend capitalism, as well as others for which the object is more ambiguously a radical upending of labor-capital relations.

In terms of the Latin American parties who are consciously organized around the "movement toward socialism," he tells us, this generally signifies a shift away from the traditional strategy of Communist parties of seizing the state as a whole and nationalizing the economy. Instead they are engaged in the more patient building up of the political, economic, and social conditions that will allow a real advance toward socialism.

Amin is quite clear that such popular movements toward socialism are not social-democratic movements dedicated to operating within capitalism, but on a kinder, gentler basis. Rather the movements toward socialism are dedicated to radical social change but are confronted with circumstances that hinder the achievement of socialist transformation in the present, and require a strategic reorientation toward a long revolution. Indeed, this characterizes the general nature of socialist struggles today.

To our knowledge, the first clear development of the "movement toward socialism" concept within the Marxian tradition can be attributed to William Morris, as leader of the Socialist League (an organization that included in its leadership Eleanor Marx, and which had Frederick Engels as a supporter). For Morris, in both those cases where subjective conditions of revolution existed but objective conditions were lacking (as in the fourteenth-century Peasant Revolt in England), and in those where objective conditions were present but subjective conditions absent (as in late-nineteenth-century Britain), it was necessary to develop a longer-run revolutionary strategy that emphasized the "movement towards socialism." As he stated in 1888:

It is not our business merely to wait on circumstances; but to do our best to put forward the movement towards Socialism, which is at least as much part of the essence of the epoch as the necessities of capitalism are. Whatever is gained in convincing people that Socialism is right always, and inevitable at last, and that capitalism in spite of all its present power is merely a noxious obstruction between the world and happiness, will not be lost again, though it may be obscured for a time, even if a new period sets in of prosperity by leaps and bounds. (William Morris, Journalism [Bristol: Thoemmes Press, 1996], 440-41)

Morris was referring here to the possibility that capitalism might be able to revive itself, overcoming its economic stagnation at that time by means of imperialist expansion, particularly the carving up of Africa and other parts of the global periphery - an imperialism which the Socialist League strenuously opposed.

Morris was engaged in a two-front war, trying to steer the Socialist League clear of both the opportunism of some parliamentary socialists and the Blanquist insurrectionism of the cruder anarchist groups of his day. To build socialism, he argued, meant an extended process of organizing, educating, altering base institutions, engaging in strategic class actions, and putting forward a new vision of life rooted in the wellsprings of history - all of which were essential if the working class were to be able to carry out the collective struggle to reconstruct the entire basis of society. The development of the machine industries, he contended in 1890 in his critique of The Fabian Essays in Socialism (the elitist, mechanistic socialism of George Bernard Shaw, Sidney Webb, and others), may contribute to "the movement toward Socialism," but they are not its "essential condition," nor for that matter was the instrumentality of the state sufficient; socialism thus could not be achieved by purely mechanical means (William Morris, Political Writings [Bristol: Thoemmes Press, 1994], 460). His overall view of socialist transition was developed most powerfully in the famous chapter, "How the Change Came," in his utopian romance, News from Nowhere.

The Movement Toward Socialism

The following reflections deal with a permanent and fundamental challenge that has confronted, and continues to confront, all popular movements struggling against capitalism. By this I mean both those of movements whose explicit radical aim is to abolish the system based on private proprietorship over the modern means of production (capital) in order to replace it with a system based on workers' social proprietorship, and those of movements which, without going so far, involve mobilization aimed at real and significant transformation of the relations between labor ("employed by capital") and capital ("which employs the workers"). Both sorts of movements can contribute, in varying degree, to calling capitalism into question; but they also might merely create the illusion of movement in that direction, although in fact only forcing capital to make the transformations it would need to co-opt a given set of working-class demands. We are well aware that it is not always easy to draw the boundary between efficacy and impotence in regard to the strategies resorted to by these movements, no more so than to determine whether their strategic aims are clashing with their tactical situation.

Taken as a whole, many of these movements can be termed "movements toward socialism." I borrow this phrase from the terminology introduced during recent decades by some South American parties (Chilean, Bolivian, and others). These parties have given up the traditional aim of Communist parties ("take and hold power to build socialism"), substituting for it the apparently more modest aim of patiently constructing social and political conditions which allow an advance toward socialism. The difference derives from the fact that the building of socialism as proposed by those Communist parties stemmed from a preconceived definition of socialism, derived from the Soviet experience, which can be summed up in two terms: nationalization and state planning. Those parties choosing the label "movement toward socialism" leave as an open question the specification of the methods to be used in socializing the management of a modern economy.

Some, but not all, of these organizations and parties that portray themselves as socialist, or even communist, claim to be the heirs of Marx and even sometimes of the versions of Marxism inherited from Sovietism and/or Maoism.

In fact the triumph of capitalism since the industrial revolution, and its globalization through imperialist expansion, have simultaneously created the conditions for the projected emergence of a higher universal socialist/communist form of civilization. Many streams came together in this invention. Engels, and Lenin after him, gave a well-known classification of its Marxist variant: English classical political economy, French utopian socialism, and German Hegelian philosophy. But this classification simplifies the reality and leaves aside many pre-and post-Marxian contributions.

Of course, Marx's contribution to formulating the socialist/communist project was the critical breakthrough in its elaboration. Marx's thought, in fact, was elaborated on the basis of a rigorous scientific critical analysis of capitalism taking into account all aspects of its historical reality. This had not been the case with previous socialist formulations or later ones that disregarded Marx. The formulation of capitalism's own law of value; the specification of the long-run tendencies of capital accumulation and of their contradictions; the analysis of the relationship between class struggles and international conflicts and likewise of the transformations in methods for managing accumulation and governance; and analysis of the alienated forms of social consciousness - these together define the thoughts of Marx that initiated the unfolding of historic Marxisms, especially those of the Second and Third Internationals, of Sovietism and of Maoism.

[Samir Amin is director of the Third World Forum in Dakar, Senegal. His books published by Monthly Review Press include The Liberal Virus, The World We Wish to See, The Law of Worldwide Value and, most recently, The Implosion of Contemporary Capitalism. This article was translated from the French by Shane Mage.]

Buy this issue of Monthly Review