A majority of union members today now have ties to a government entity, at the federal, state or local levels. Roughly 1-in-3 public-sector workers is a union member, compared with about 1-in-15 for the private-sector workforce. The typical union worker now is more likely to be an educator, office worker or food or service industry employee rather than a construction worker, autoworker, electrician or mechanic. Far more women than men are in unions. 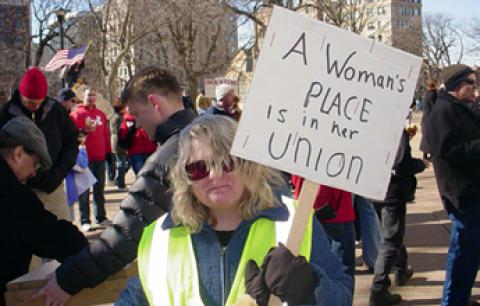 ,
Washington— Unions representing government workers are expanding while organized labor has been shedding private-sector members over the past half-century.
A majority of union members today now have ties to a government entity, at the federal, state or local levels.
Roughly 1-in-3 public-sector workers is a union member, compared with about 1-in-15 for the private-sector workforce, according to the Bureau of Labor Statistics. Overall, 11.3 percent of wage and salaried workers in the United States are unionized, down from a peak of 35 percent during the mid-1950s in the strong post-World War II recovery.
The typical union worker now is more likely to be an educator, office worker or food or service industry employee rather than a construction worker, autoworker, electrician or mechanic. Far more women than men are in unions.
Until four years ago, the unionization rate was far higher in the private sector than in the public sector. Now the roles are reversed.
But it’s been a bumpy road for public unions in some Republican-governed states.
In 2011, Gov. Scott Walker, R-Wis., forcefully took on public-sector unions soon after he was elected. He got enacted a bill effectively ending collective bargaining for most public workers in the state. He withstood huge labor demonstrations at the state Capitol and then became the first governor in U.S. history to defeat a recall attempt. The law has been challenged in court, and continues to be. But its main thrust has been upheld.
A sign of the decline of traditional labor unions came in May when the United Auto Workers raised its membership dues for the first time in 27 years to help offset declining membership. Also, the defeat in February of the UAW’s effort to unionize workers at Volkswagen’s Chattanooga, Tennessee, plant was a setback to labor.
Michigan Membership Falls
The percentage of Michigan workers in a union fell slightly in 2013 as the state adopted a right-to-work law that makes union membership optional. Membership has fallen most sharply in the private sector, where only 6.7 percent of workers belong to unions. By contrast, 35.3 percent of public-sector workers are union members.
Total union membership in Michigan fell from 16.6 percent in 2012 to 16.3 percent last year. The number of union workers actually rose from 629,000 in 2012 to 633,000 in 2013, but the overall workforce in the state rose by 114,000 to 3.9 million.
This year, unions have faced several challenges.
In a blow to public sector unions, the Supreme Court ruled last week that thousands of health care workers in Illinois who are paid by the state cannot be required to pay fees that help cover a union’s cost of collective bargaining.
The justices said the practice violates the First Amendment rights of nonmembers who disagree with union stances.
The ruling was narrowly drawn, but it could reverberate through the universe of unions that represent government workers. The case involved home-care workers for disabled people who are paid with Medicaid funds administered by the state.
Also in June, a California judge declared unconstitutional the state’s teacher tenure, dismissal and layoff laws. The judge ordered a stay of the decision, pending an appeal by the state and teachers union.
“The basic structure of the labor union movement has changed, reflecting changes in the economy,” said Ross Baker, a political science professor at Rutgers University. “Manufacturing is a diminishing segment of the economy. Also, a lot of the manufacturing that’s being done today is being done nonunion.”
Union members continue to be a powerful political force in politics, and Baker said he didn’t see the role of unions diminishing. “I just think the colors of the collars are changing,” Baker said.
In 2013, 14.5 million workers belonged to a union, about the same as the year before. In 1983, the first year for which comparable figures are available, there were 17.7 million union workers.
The largest union is the National Education Association, with 3.2 million members. It represents public school teachers, administrators and students preparing to become teachers.
Next is the 2.1-million Service Employees International Union. About half its members work in the public sector.
The American Federation of State County and Municipal Employees has 1.6 million, followed by the American Federation of Teachers with 1.5 million and the International Brotherhood of Teamsters with 1.4 million.
There are 1.3 million members in the United Food and Commercial Workers International Union.
A 2013 Gallup poll showed that 54 percent of Americans said they approved of labor unions, down from the all-time high of 75 percent in both 1953 and 1957.
'Diminishing Role'
“Labor unions play a diminishing role in the private sector, but they still claim a large share of the public sector workforce,” says Chris Edwards, director of tax studies at the libertarian, free-market Cato Institute.
“Public sector unions are important to examine because they have a major influence on government policies through their vigorous lobbying efforts.”
Since 2000, factories have shed more than 5 million jobs. Five states — Virginia, North Carolina, South Carolina Georgia and Texas — ban collective bargaining in the public sector.
The Detroit News contributed.
Subscribe to Portside