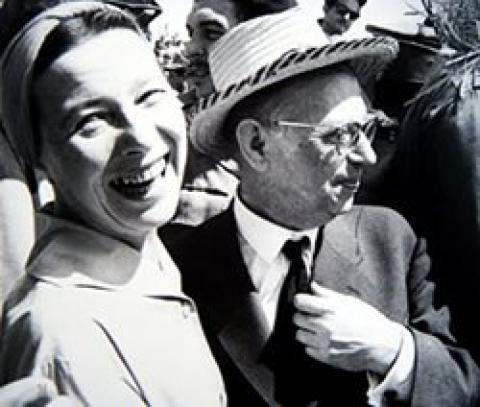 When people recount the lives of Simone de Beauvoir and Jean-Paul Sartre, hanging out in boats with Fidel Castro and getting photobombed by Che Guevara seem to rarely make the cut.

In 1960, during the afterglow of the Cuban revolution, the famous feminist philosophers took a trip with her long-time companion Sartre to Havana. They were part of a larger flock of leftist intellectuals who were invited to Cuba to attend cultural congresses. When they arrived in February, they met with Che Guevara and talked for hours, the biography "Che" recounts.

Sartre reported on his visit in 16 articles to the French newspaper France-Soir entitled "Storm Over Sugar." The photos were taken by Cuban photographer Alberto Korda. Korda is often known for his iconic photo of Che that has since become the basis for the image plastered on t-shirts, buttons and posters. Incidentally, that image shares the same reel of film as many images featuring Sartre and de Beauvoir in Havana.


Study: Eviction Rates for Black Women on Par With Incarcerations for Black Men

According to the study, in any given year, approximately 16,000 adults and children are evicted in Milwaukee from approximately 6,000 housing units-that equates to 16 households evicted every day.  These startling statistics account only for court-ordered evictions and do not even touch on coercive tactics like paying unwanted tenants to vacate, housing condemnations and landlord foreclosures.

It offers a deep analysis of how evictions sets in motion a chain reaction that exasperates the well-being of already struggling, poor families. The study shows those who are cast out from their homes are disproportionately women from black and Hispanic neighborhoods. According to the study, "Poor black men are locked up while poor black women are locked out."

A South African company has built a drone designed to shower pepper spray on unruly crowds and says it has begun supplying units to an international mining company.

Desert Wolf claims it wants to help in "preventing another Marikana" - a reference to a protest in August 2012 at which 34 striking mineworkers were shot and killed during clashes with the police. But the "Skunk Riot Control Copter" was condemned by labour activists as "absolutely outrageous" and compared with deadly US military drones in Pakistan.

Current aviation rules in South African prevent the drones being deployed but they hope the legislation can be changed.  Rehad Desai, spokesperson for the Marikana Support Campaign and director of a documentary film, Miners Shot Down, said:

Rabbi Zalman Schachter-Shalomi, the Father of the Jewish Renewal Movement, Has Died at age 89

A maverick rabbi who started out in the Chabad-Lubavitch movement, Schachter-Shalomi transitioned over time toward a New Age, neo-Chasidic approach, gaining a substantial following on his own but also influencing other Jewish denominations.  His nontraditional approaches to Jewish spirituality, including services marked by ecstatic prayer, drumming and dancing, eventually morphed into the Jewish Renewal movement.

The movement he started had its origins in the 1960s, when Schachter-Shalomi began instituting meditation and dance during prayer services. He sought to fuse the mystical traditions of his Lubavitch background with the sensibilities of the modern world in an effort to revitalize a synagogue practice he found stultifying.  He eventually broke with Chabad, founding the P'nai Or Religious Fellowship in 1962 and a havurah - a lay-led congregation with no central leader - in Sommerville, Mass., in 1968.

Schachter-Shalomi led prayers in English set to popular tunes, translated Hasidic texts on mysticism into English, promoted ecologically friendly kashrut and encouraged Jews to create their own colorful tallitot, or prayer shawls.  His last teaching post was at Naropa University, a Buddhist-inspired Colorado institution that is now home to Schachter-Shalomi's archives.

Stephen Gaskin, Hippie Who Founded an Enduring Commune, Dies at 79

Stephen Gaskin, a Marine combat veteran and hippie guru who in 1971 led around 300 followers in a caravan of psychedelically painted school buses from San Francisco to Tennessee to start the Farm, a commune that has outlived most of its countercultural counterparts while spreading good works from Guatemala to the South Bronx, died on Tuesday at his home on the commune, in Summertown, Tenn. He was 79.

By Mr. Gaskin's account, the Farm sprang in part from spiritual revelations he had experienced while using LSD, the details of which he described to thousands of disciples, who gathered in halls around San Francisco to hear his meditations on Buddhism, Jesus and whatever else entered his mind.

The Farm, which grew to 1,500 members at its peak in 1979 and has about 200 today, has outlived almost all of them. (It now includes a retirement community.) It departed from most of its counterparts by embracing an entrepreneurial spirit: It created a book-publishing business, marketed pickles and sorghum syrup under the Old Beatnik label, and even dealt in hand-held Geiger counters to measure radiation leaks at nuclear power plants.

It also spurned insularity for outreach. Answering Mr. Gaskin's call to "change the world," Farmies, as they called themselves, built 1,200 houses for the victims of a 1976 earthquake in Guatemala, set up volunteer ambulance services in the South Bronx and on an Indian reservation in upstate New York, and started a school lunch program in Belize and an agricultural training program in Liberia. They were among the earliest volunteers to arrive in New Orleans after Hurricane Katrina.

In 1980, Plenty International, a charitable organization Mr. Gaskin started, was awarded one of the first Right Livelihood Awards. Sometimes called the alternative Nobel Prize, the award is presented by the Swedish Parliament to those who have demonstrated # # #practical and exemplary solutions to the most urgent challenges facing the world today."

If you listen to traditional media channels, you may be surprised to learn that soccer is actually a pretty big deal in the United States. Take for instance, Stephen Dubner's usually engaging and informative Freakonomics radio, who trotted out a tired canard about how unpopular soccer is in the United States. The story starts with the ludicrous notion that the World Cup is unpopular because it isn't American football.

I believe this is known as a "straw man" argument. Soccer is not as popular as American football? Nothing is as popular as American football! The 24.3. million people tuned in to the final of the 2010 FIFA World Cup (a 41 percent increase over the 2006 cup, by the Way) is comparable to Game 7 of the 2013 NBA finals which captured 26 million viewers and more than the final game of the 2013 World Series which captured 19.2 million viewers. By contrast, it is much greater than the 8.2 million that watched the last game of the 2013 NHL Stanley Cup Finals. By Dubner's ludicrous standard, no sport is popular in the United States because it isn't American football.

This is why a more interesting conversation about soccer in the United States has shifted from "soccer isn't popular" to "soccer is only popular every four years." Political Scientist Andrei Markovitz talks of the Olypianization of soccer, Americans tune in to the big event (World Cup) every four years and ignore the sport in the interim (kinda like American politics... sorry couldn't resist). But even that isn't true...the landscape is shifting rapidly, only it's a little hard to tell because soccer is so fragmented.