Ungrateful Ants: A Response to Chelsea Manning's Strategy to Leave `Self Contained' Enclaves for IS to Rule

A response to Chelsea Manning's strategy to leave `self contained' enclaves for IS to rule - it is a crude, self righteous, inhuman lack of consideration for the populations involved, on the ground, and for what they want for themselves. (Response to original piece in The Guardian and re-posted on Portside.) 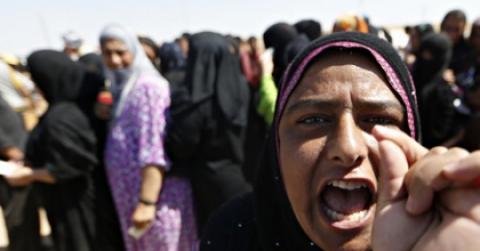 Whether or not one believes a US/European military intervention against the Islamic State is a strategy that is likely to fail,

one thing should scare the hell out of anyone reading Manning's cold blooded opinion on US best strategy against the IS, as exposed in The Guardian and further circulated by Portside : it is the crude, self righteous, inhuman lack of consideration for the populations involved, on the ground, and for what they want for themselves. http://portside.org/2014-09-19/another-western-war-wont-end-isis-terror

According to Manning :  the only way to defeat Isis is to allow the group to set up its own contained "failed `state'" where over time its fire would "die out on its own".

Interesting. And who lives inside this `self contained', `clearly demarcated territory' ?

Ants, I guess ? Not humans, for sure, in Manning's views .

Soldier Manning does not seem to care at all about the fate of those sub-humans callously left at the hands of armed fundamentalists who repeatedly claim ethnic cleansing, forced conversions, rape under the guise of muta'a marriages, beheading of untermensch/kafir ( as they label all those who dissent) , etc..as part of their Islamic duties.

How crude, Soldier Manning ! As long as only these insects - and not Americans - are suffering and dying in horrible conditions, who cares ?

And for how long would Soldier Manning leave us hostage, for the good of the rest of humanity ? An indeterminate period of time., as `Isis would gradually become unpopular'.

How `gradually', Soldier Manning ? When fascists come to power, history shows, they hold on to it, in quite undemocratic ways . How long should we be sacrificed to - supposedly - global interests ? 50 years ?: like the Spaniards left to rot under Franco, to save the world from war ?
A life time for a human, let alone for an ant.

Clean-handed Manning is not the first and only one to cynically suggest that - for the sake of white America's soul - concerned populations should be left to experience fascism till they themselves gather the strength to revolt and overturn it. Many, over the years, on the far-left and among pacifists and human rights do-gooders, voiced the same opinion in the name of anti imperialism.

My response to them is simple: do not speak for us, do not decide for us that we should live under fascism, sweep the floor at your door step first (stop your countries from selling arms to these fundamentalist movements and regimes, for a start), before attempting to clean ours - 'for our good'.

Algeria in the nineties, when its people were fighting day after day to prevent the country to become a `failed state' and one of these `self contained' enclaves advocated by Manning, within which GIA (Islamic Armed Groups) and the like ( FIS, AIS, FIDA, etc.) would rule , counted 200 000 victims. Against the global trend that urged them to bend their heads to fundamentalist armed groups, Algerian people, many women among them, - despite being abandoned by all those who should have been their allies -, decided they would rather die fighting.

However, there were, in that time too, American voices to suggest that, after all, FIS (Islamic Salvation Front) and GIA were not that bad insofar as they would `not threaten US' economic interests' in the region. It was written squarely in a report by the Rand Corporation**.

The report added that, of course, `in the process', `human rights will be trampled' and `women's rights would be severely curtailed under sharia', but `these were Algeria's internal affairs' and the US should not interfere.
Does it not echo Soldier Manning's pious position, today ?

Things have not changed so much in three decades - or even in eight decades , if one goes back to the Munich agreements.

Be it in the name of pacifism, or human rights and humanitarian values, or anti imperialism, the Pontius Pilate of the day still wash their hands of the situations they themselves - or the governments they elected to act in their name - created for us to live in, through their policies of unconditional support to extreme religious-rights (as a way to indirectly eradicate progressive and left forces), through their arms selling, and through military attacks on regimes that did not suit their foreign policy in the region.

The Frankenstein monster the US and others helped create has long escaped their hands. How to bring it back under control is certainly not an easy question and cannot be answered by one country alone, not even by 'the West' alone. It is now a global question that requires a global answer, while more and more people throughout Asia and Africa are fully aware of the danger the likes of IS represent for them.

First and foremost, it is for those directly concerned, endangered, already under the boot of the green-fascists - not for Soldier Manning- , to tell the world how they want the monster to be contained, and also - clearly - how they do not want the situation to be dealt with. Although a US/Europe military intervention may not be what they are looking forward to, i doubt that they fancy the alternative as posed by Manning and others: being abandoned, unarmed, to their own forces, facing green-fascists armed to their teeth by the very same US and European powers.

But one thing is for sure: to cowardly hide away from growing global extreme-right forces working under the guise of religion, i.e. the new forms that fascism takes today, will not spare the whole world from having to face the un-ending ambition of these movements.

And to openly, cynically, abandon some populations deemed less important (or less human?) to keep the monster fed and temporarily satisfied, is both a short term view and a shame.

Ants have become quite ungrateful these days .

[Marieme Helie Lucas is an Algerian sociologist, founder and former International Coordinator of the 'Women Living Under Muslim Laws' international solidarity network. Marieme is also the founder of 'Secularism Is A Women's Issue' ]