Rahm Emanuel is vulnerable. True, he cleared the snow in the winter, the Chicago equivalent of making the trains run on time. But beyond that, his neoliberal policies have made him a lot of enemies. The ramifications of an Emanuel defeat go beyond Chicago. He has been central to the Democratic Party's rightward swing since the Clinton years. The potential for a Lewis victory is as yet unclear. The election is just five months away - she has yet to declare her candidacy. 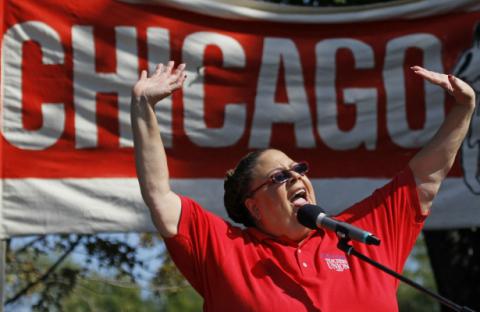 On August 5, at a Young Chicago Authors event, Mayor Rahm Emanuel read the late Maya Angelou's "Still I Rise." A poem so explicitly written in the voice of a black woman ("Does my sexiness upset you? / Does it come as a surprise / That I dance like I've got diamonds / At the meeting of my thighs?") must have sounded odd coming from his lips.

And yet politically, if not aesthetically, the choice made perfect sense. For as the mayor was channeling one black woman, he was desperately trying to neutralize the challenge of another. A poll a few weeks earlier had given Chicago Teachers Union leader Karen Lewis a nine - point lead if she ran against him for mayor; another poll a week after the reading gave her a four - point lead - narrower, but still beyond the margin of error.

Lewis has long been Emanuel's nemesis. She led a successful teachers strike in 2012 and vigorously opposed his decision to close more than fifty schools in black and low - income neighborhoods. There is no love lost between them. When she fought him over lengthening the school day, he told her: "Fuck you, Lewis!"; the week before the strike, Lewis called him a "liar and a bully." Now they could be facing off for the one job that Emanuel - previously Obama's White House chief of staff - said "could have pried me away from the president's side."

It's not difficult to see why Emanuel is vulnerable. True, he cleared the snow in the winter, the Chicago equivalent of making the trains run on time. But beyond that, his neoliberal policies have made him a lot of enemies.

His problems go beyond policy to personality. Put bluntly, people don't like him. Abrasive, divisive and arrogant, he seems to have brought the worst of Washington to a city that has come to prefer a more consensual - if occasionally crooked - style of leadership. Chicagoans felt they had ownership of the last mayor, Richard Daley, and that, for all his flaws, he was devoted to them. He had no pretensions beyond the city. There is a sense that Emanuel sees City Hall as a steppingstone to something bigger and better - even if it's not clear what. "Daley.knew the streets, he knew the drivers of the garbage trucks, he knew the tree trimmers, he knew their parents," an official told Kari Lydersen for her book Mayor 1%. "Rahm has no clue who the drivers are, and he doesn't care.. But you ask him who the head of the Chicago Mercantile Exchange is, and he'll have him on speed dial." Polls suggest that Emanuel is unpopular with every ethnic group, particularly African - Americans. His approval ratings are down to 35 percent; his disapprovals are above 50. Lewis, meanwhile, is popular among union households, African - Americans and the young.

The ramifications of an Emanuel defeat go beyond Chicago. He has been central to the Democratic Party's rightward swing since the Clinton years. He played a key role in getting NAFTA passed as well as the crime bill, which was largely responsible for the exponential increase in black prisoners during the 1990s. The Democratic establishment could not ignore the demise of one of their own in Obama's backyard.

But the potential for a Lewis victory is as yet unclear. The election is just five months away, and though Lewis's supporters are collecting signatures - and she's put $40,000 of her own money into a campaign fund and is touring neighborhoods holding public conversations about the future of the city - she has yet to declare her candidacy.

Given the degree to which the electoral system is blatantly rigged in favor of the rich, there are two reasons the left might yet invest in her campaign. The first is to galvanize people into the kind of social movement that can shift the balance of forces in the long term. When Jesse Jackson ran in 1984, for example, he reversed a twenty - year decline in black voter participation; his run in 1988 forced the party to agree to abandon winner - take - all primaries in favor of proportional representation. He lost both times. But he changed the Democratic Party, to enduring effect. Without proportional representation, Obama would not have been the nominee in 2008.

The second is to win office in order to pursue a transformative agenda. Transformative is, of course, relative to the moment and contingent on the possibilities. To qualify as such, the victor must undertake the kind of irreversible change that leaves the polity fundamentally different from when he or she took it over. This was the agenda of Chokwe Lumumba, mayor of Jackson, Mississippi, until his untimely death earlier this year. "Our revolution," he said, "is for the better idea; it's not just for the change in colors."

The second is not possible without the first. Without support from a social movement, there is only so much any person can do. Strong arguments and good intentions carry little weight against vested interests unless they are buttressed by pressure from below.

Lewis has the record and the politics to mount a serious challenge on these terms. In so doing, she would enable Chicago to follow New York, Boston, Pittsburgh, Seattle and many other cities in their pursuit of a more progressive agenda than Democrats are pursuing nationally. But time is running out, and we have yet to hear what she'll stand for. She needs intense, broad and deep popular support to challenge negative ads through social networks and to match the immensity of Emanuel's funding. In short, she needs the left to invest in her to counter the millions the wealthy will invest in Emanuel. That takes time to cultivate.

"You never want a serious crisis to go to waste," Emanuel said shortly after being named chief of staff in Obama's first term. "This crisis [the economic meltdown] provides the opportunity for us to do things that you could not do before." Lewis is, in no small part, responsible for the crisis in Emanuel's mayoralty. She should not let this opportunity go to waste.

[Gary Younge, the Alfred Knobler Journalism Fellow at The Nation Institute, is the New York correspondent for the Guardian and the author of The Speech: The Story Behind Dr Martin Luther King Jr.'s Dream (Haymarket). His previous books include Who Are We - And Should it Matter in the 21st Century? (Nation Books), Stranger in a Strange Land: Travels in the Disunited States (New Press), and No Place Like Home: A Black Briton's Journey Through the Deep South (Mississippi).]