After the pity party's through, let's get organized. There was one exception to the dearth of Democratic leaders who championed populist proposals. Sen. Elizabeth Warren crisscrossed the country attempting to galvanize the electorate in key Senate races. One thing has not changed: "The stock market and gross domestic product keep going up, while families are getting squeezed hard by an economy that isn't working for them." Now is the time for Warren or Bernie Sanders. 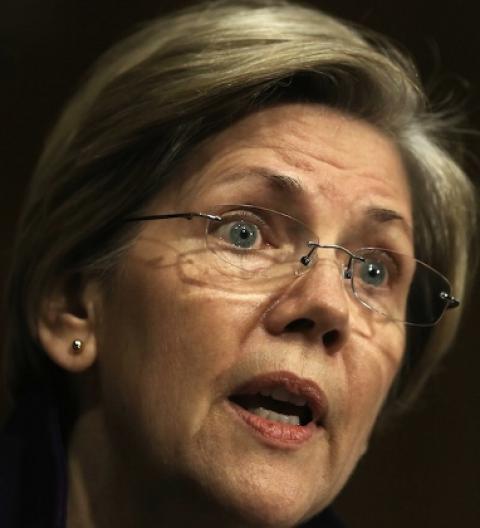 The Lesson from the Midterms: Elizabeth Warren Should Run in 2016

If Warren decides to throw her hat into the ring, she will have to do so sometime in early 2015 in order to have a realistic chance of securing the nomination.

As we sit down to the post-midterm banquet of blame, a number of items stand out on the menu.

First there is the traditional fare: The party that holds the White House often loses midterm elections-in this case, the Democrats staged a repeat of their 2010 performance.

Still, money talks, particularly when it comes to elections. According to the Center for Responsive Politics, congressional candidates who spent more than their opponents won 94.2 percent of the time, while in the Senate, where a handful of well-financed Dems were defeated, that figure stood at 81.8 percent.

Or the despairing partisan can order that old staple: Traditional Democratic voting blocs fail to vote in midterm elections.

This year that was certainly true of voters under 30, Latino voters and African American voters, who represented 19, 13 and 10 percent of the electorate in 2012, but only 13, 12 and 8 percent in 2014. If those who turned out then had turned out now, the results would have looked different. That is supported by an October survey by Democracy Corps, which asked those who voted in 2012 who they would vote for today. A hypothetical Democratic presidential candidate beat their Republican counterpart by 4 percentage points.

As it is, the GOP now controls the Senate (and thereby all appointments to the federal judiciary) because Democratic voters failed to turn out in sufficient numbers yesterday, while the most faithful Republican segment of the electorate-those who are older, white or male-had no such problem. (The Republicans also won the ballots of 38 percent of voters who identified as members of union households-or 6 percent of the total 2014 electorate. This indicates that organized labor could do a better job of political education.)

What motivated those who did vote? According to the exit polls, 45 percent of those polled cited "the economy" as their chief concern. Yet, with few exceptions, elected Democratic Party leaders shied away from making populist appeals-appeals that might have inspired people to get out and vote their pocketbooks. As In These Times Senior Editor David Moberg has reported, according to a recent Hart Research Associates poll, given a choice between a Republican who promised to "grow the economy" and a Democrat who supported creating "an economy that works for everyone, not just the wealthy few," swing voters picked the Democrat by 22 points.

There was one exception to this dearth of Democratic leaders who championed populist proposals. Sen. Elizabeth Warren (D-Massachusetts) crisscrossed the country attempting to galvanize the electorate in key Senate races.

So one can end the pity party with just deserts for corporate Democrats: Warren seems to be considering a challenge to Wall Street Democrat Hillary Clinton for the party's 2016 nomination. In October, People magazine asked Warren if she was "on board with a run for the White House?" Instead of her previous "No," Warren replied, "I don't think so." Then she equivocated, "If there's any lesson I've learned in the last five years, it's, `Don't be so sure about what lies ahead.' There are amazing doors that could open."

Erica Sagrans is heartened by this change of tune. Sagrans is the campaign manager for Ready for Warren, a group that describes itself as "progressives ready to support someone who isn't afraid to take on powerful interests like the Wall Street banks that crashed our economy."

"More need to take Warren's lead and be honest and fearless about standing up for their beliefs and convictions in the way that she does," Sagrans says. "She is the kind of Democrat that the Democrats have been yearning for. And Warren is motivating to lots of other kinds of people as well. I was in Iowa at Tom Harkin's annual steak fry and people in Hillary Clinton t-shirts came up to us and said, `I love Elizabeth Warren. She is amazing.' "

Warren has the additional advantage of not being a professional politician. Following the 2008 financial collapse, she was propelled into politics by the enthusiasm of people who saw in her a straight-talking critic of a failed banking system and a defender of working families. Unlike Clinton, she has not cozied up to Wall Street money or lived much of her adult life in Washington.

Sagrans says that if Warren decides to throw her hat into the ring, she will have to do so sometime in early 2015 in order to have a realistic chance of securing the nomination.

Warren isn't the only plain-speaking populist eyeing a run for the White House. Bernie Sanders, the independent socialist senator from Vermont, is also considering declaring himself a candidate for the Democratic nomination. Sagrans sees no problem with that: "It would great to have it be a competitive race with a lot of different people and ideas in the mix."

After all, coronations have no place in a healthy republic-nor does rule by an elected oligarchy, which is where, with the 2014 midterms, America seems to be headed.

It's Time to Work on America's Agenda

There have been terrible, horrible, no good, very bad Election Days for Democrats before - and Republicans have had a few of those, too. Such days are always followed by plenty of pronouncements about what just changed and what's going to be different going forward.

But for all the talk of change in Washington and in states where one party is taking over from another, one thing has not changed: The stock market and gross domestic product keep going up, while families are getting squeezed hard by an economy that isn't working for them.

The solution to this isn't a basket of quickly passed laws designed to prove Congress can do something - anything. The solution isn't for the president to cut deals - any deals - just to show he can do business. The solution requires an honest recognition of the kind of changes needed if families are going to get a shot at building a secure future.

It's not about big government or small government. It's not the size of government that worries people; rather it's deep-down concern over who government works for. People are ready to work, ready to do their part, ready to fight for their futures and their kids' futures, but they see a government that bows and scrapes for big corporations, big banks, big oil companies and big political donors - and they know this government does not work for them.

Americans understand that building a prosperous future isn't free. They want us to invest carefully and prudently, sharply aware that Congress spends the people's money. They want us to make investments that will pay off in their lives, investments in the roads and power grids that make it easier for businesses to create good jobs here in America, investments in medical and scientific research that spur new discoveries and economic growth, and investments in educating our children so they can build a future for themselves and their children.

Before leaders in Congress and the president get caught up in proving they can pass some new laws, everyone should take a skeptical look at whom those new laws will serve. At this very minute, lobbyists and lawyers are lining up by the thousands to push for new laws - laws that will help their rich and powerful clients get richer and more powerful. Hoping to catch a wave of dealmaking, these lobbyists and lawyers - and their well-heeled clients - are looking for the chance to rig the game just a little more.

But the lobbyists' agenda is not America's agenda. Americans are deeply suspicious of trade deals negotiated in secret, with chief executives invited into the room while the workers whose jobs are on the line are locked outside. They have been burned enough times on tax deals that carefully protect the tender fannies of billionaires and big oil and other big political donors, while working families just get hammered. They are appalled by Wall Street banks that got taxpayer bailouts and now whine that the laws are too tough, even as they rake in billions in profits. If cutting deals means helping big corporations, Wall Street banks and the already-powerful, that isn't a victory for the American people - it's just another round of the same old rigged game.

Yes, we need action. But action must be focused in the right place: on ending tax laws riddled with loopholes that favor giant corporations, on breaking up the financial institutions that continue to threaten our economy, and on giving people struggling with high-interest student loans the same chance to refinance their debt that every Wall Street corporation enjoys. There's no shortage of work that Congress can do, but the agenda shouldn't be drawn up by a bunch of corporate lobbyists and lawyers.

Change is hard, especially when the playing field is already tilted so far in favor of those with money and influence. But this government belongs to the American people, and it's time to work on America's agenda. America is ready - and Congress should be ready, too.

[Elizabeth Warren, a Democrat, represents Massachusetts in the Senate.]