Rep. John Conyers wanted to block U.S. funding to neo-Nazis in Ukraine. But the Anti-Defamation League (ADL) and the Simon Wiesenthal Center refused to help. 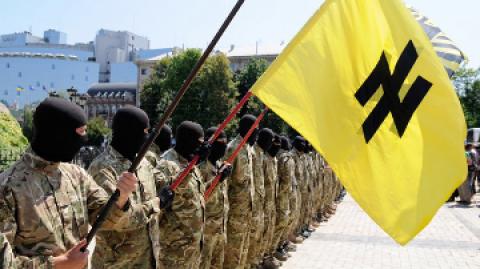 Azov battalion soldiers take an oath of allegiance to Ukraine in Kiev's Sophia Square before being sent to the Donbass region. Amnesty International reports, at least one of Kiev's volunteer battalions has been committing war crimes...,http://www.democraticunderground.com

AlterNet has learned that an amendment to the 2015 National Defense Authorization Act (NDAA) that would have forbidden US assistance, training and weapons to neo-Nazis and other extremists in Ukraine was kept out of the final bill by the Republican-led House Rules Committee. Introduced by Democratic Representative John Conyers, the amendment was intended to help tamp down on violent confrontations between Ukrainian forces and Russian separatists. (Full text of the amendment embedded at the end of this article).

A USA Today/Pew poll conducted in April while the NDAA was being debated found that Americans opposed by more than 2 to 1 providing the Ukrainian government with arms or other forms of military assistance.

If passed, Conyers' amendment would have explicitly barred those found to have offered "praise or glorification of Nazism or its collaborators, including through the use of white supremacist, neo-Nazi, or other similar symbols" from receiving any form of support from the US Department of Defense.

The amendment was presented by congressional staffers to lobbyists from Anti-Defamation League (ADL) and the Simon Wiesenthal Center, two of the country's largest established Jewish pressure groups. Despite their stated mission to combat anti-Semitism and violent extremism, the ADL and Wiesenthal Center refused to support Jeffries and Conyers' proposal.

According to Democratic sources in Congress, staffers from the ADL's Washington office and the Simon Wiesenthal Center rejected the amendment on the grounds that right-wing Ukrainian parties like Svoboda with documented records of racist extremism had "moderated their rhetoric." An ADL lobbyist insisted that "the focus should be on Russia," while the Wiesenthal Center pointed to meetings between far-right political leaders in Ukraine and the Israeli embassy as evidence that groups like Svoboda and Right Sector had shed their extremism.

The ADL's Washington office and the Simon Wiesenthal Center did not respond to numerous requests by email and telephone for comment.

Earlier this year, the ADL's outgoing National Director Abraham Foxman noted Svoboda's "history of anti-Semitism and platform of ethnic nationalism" in a press release demanding the party renounce its past glorification of Stepan Bandera, a World War Two-era Nazi collaborator who has become a symbol of Ukrainian nationalism.

When the Ukrainian parliament failed to pass a bill this October honoring Bandera's Ukrainian Rebel Army, about 8000 supporters of Svoboda and the extremist Right Sector marched on the building, attacking riot police with homemade weapons while waving Banderist flags and Svoboda banners. The violent backlash was a reminder that the legend of Bandera would not die any time soon, and that Foxman's admonitions had fallen on deaf ears.

Svobodoa's leader, Oleh Tyahnybok, once called for the liberation of his country from the "Muscovite-Jewish mafia." In 2010, following the conviction of the Nazi death camp guard John Demjanjuk for his supporting role in the death of nearly 30,000 people at the Sobibor camp, Tyahnybok flew to Germany to praise him as a hero who was "fighting for truth."

Since the Euromaidan revolution, however, Svoboda has fought to rehabilitate its image. This has meant meeting with Israeli Ambassador to Ukraine Reuven Din El and appealing to shared national values. "I would like to ask Israelis to also respect our patriotic feelings," Tyahnybok has remarked. "Probably each party in the [Israeli] Knesset is nationalist. With God's help, let it be this way for us too."

Right Sector, the radical right-wing movement that battled riot police during the latter stages of the Euromaidan uprising, earned plaudits from the ADL's Foxman when its leader arranged his own meeting with Din El. "[Right Sector leader] Dmitry Yarosh stressed that Right Sector will oppose all [racist] phenomena, especially anti-Semitism, with all legitimate means," the Israeli embassy declared.

The results of this month's Ukrainian parliamentary elections were widely portrayed as a setback for the ultra-nationalist right-wing, with Svoboda taking around 6 percent of the vote while Yarosh's Right Sector failed to qualify for seats. The outcome cheered the American Jewish Committee, which declared that "Jews in most of Ukraine are heartened by the election results and even optimistic about the country's future."

But the dismal showing by the traditional ultra-nationalist parties was hardly evidence of a diminished right-wing. With President Petro Poroshenko leading the nationalists' dream war in the East, Svoboda and Right Sector lost the protest vote they had commanded during the heady years of insurrection. As Anton Shekhovtsov, an expert on Europe's radical right, explained, "in 2012, Svoboda was also considered almost the only `patriotic' party, but now all democratic parties are patriotic, so Svoboda has lost its `monopoly' on patriotism."

During the national election campaign, Ukraine's leading party, the People's Front of neoliberal Prime Minister Arseniy Yatsenyuk, was honeycombed with far-right militants. Andrei Parubiy, the co-founder of the neo-Nazi-inspired Social National Party and former chief of the Maidan defense committees, was among the extremists who won seats on the People's Front ticket.

Besides Parubiy, the People's Front included Andriy Biletsky, leader of the Azov militia, an overtly neo-Nazi fighting force that has been on the front lines of the battle against Russian separatists in eastern Ukraine. Azov deputy commander Vadym Troyan joined him on the party's electoral list, rounding out a peculiar mix of khaki shirt clad fascists and buttoned-down neo-liberals.

Unlike Svoboda, these figures do not even feign moderation. "The historic mission of our nation in this critical moment is to lead the White Races of the world in a final crusade for their survival," Biletsky recently wrote. "A crusade against the Semite-led Untermenschen."

Azov fighters are united by their nostalgia for Nazi Germany and embrace of open fascism. Sporting swastika tattoos, the battalion "flies a neo-Nazi symbol resembling a Swastika as its flag," the New York Times' Andrew Kramer recently reported.

With the government in a state of flux, Azov is filling the void in the East. As Ukrainian parliamentarian Gregory Nemira complained to reporter Anna Nemtsova in September, "The president still has not appointed a chief of staff for the armed forces. He has not admitted we are in a state of war, preferring to throw the battalions like Azov into the most dangerous combat zones, where authorities would not have the courage to send regular troops."

Azov is precisely the sort of neo-Nazi organization that Conyers' NDAA amendment would have deprived of US assistance. But when the congressman sought help from the ADL and the Wiesenthal Center in moving the proposal forward, he was rebuked. The amendment died a quiet death and Azov's American supply line remains intact. 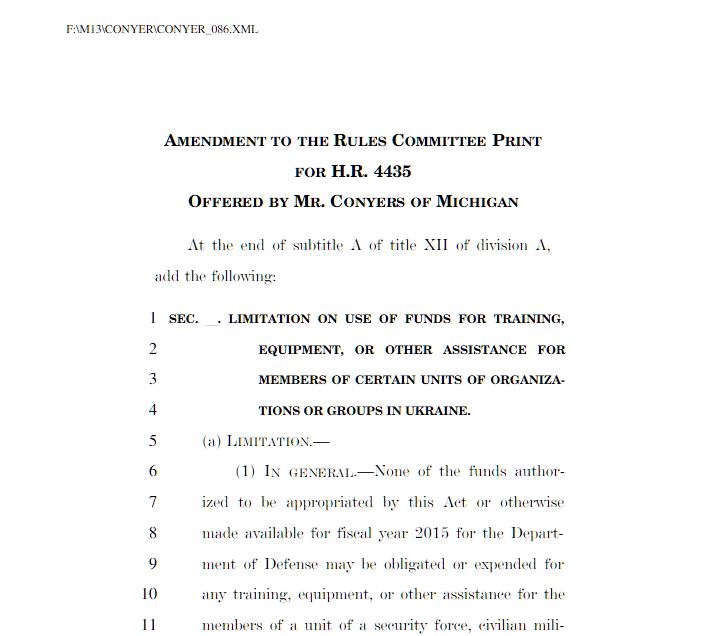 [Max Blumenthal is a senior writer for AlterNet, and the author of Goliath and Republican Gomorrah. Find him on Twitter at @MaxBlumenthal.]