It's a Wonderful Life, Comrade - Hollywood Movie Investigated by FBI, with Help from Ayn Rand

Ayn Rand helped the FBI investigate whether `It's a Wonderful Life' was commie propaganda. When the movie first came out, it fell under suspicion from the FBI and the House Un-American Activities Committee (HUAC) as Communist propaganda, part of the Red Scare that soon would lead to the blacklist and witch hunt that destroyed the careers of many talented screen and television writers, directors and actors. 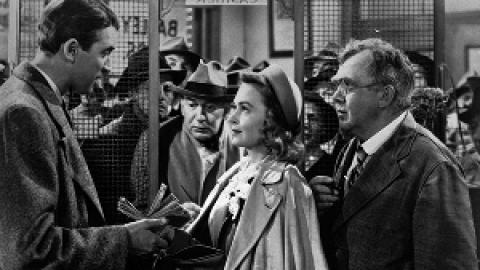 A number of years ago, I was telling a longtime city dweller friend of mine yet another story about the small, upstate New York town in which I grew up.

Simultaneously baffled and captivated, he said, "I think you were born and raised in Bedford Falls," the fictional burg at the center of Frank Capra's classic Christmas movie, "It's a Wonderful Life."

Well, I wasn't. Actually, I grew up about 27 miles west of there. Its real name is Seneca Falls, NY - yes, the same place that's also the birthplace of the women's suffrage movement. While not absolutely certain, there's a compelling body of circumstantial evidence that Capra had the town in mind when he created his cinematic version of Bedford Falls. The steel bridge over the canal, for example, like the one from which the hero George Bailey contemplates jumping in a suicide attempt, only to dive in to save his guardian angel, Clarence. The old Victorian homes, the design of town streets, a large Italian population, mentions of nearby cities Rochester, Buffalo and Elmira are just a few of the other similarities. There's even the perhaps apocryphal tale of Frank Capra finding inspiration after stopping in Seneca Falls for a haircut on his way to visit an aunt.

Enough coincidences abound that Seneca Falls now holds a yearly "It's a Wonderful Life" festival, and although it may not draw as many visitors as the nearby Women's Rights National Historical Park, there's also an "It's a Wonderful Life" museum. Whatever the ultimate truth, there's no denying that the movie is a storybook evocation of bygone small town America, places like Seneca Falls and my own hometown, right down to the underside of greed and malice that often lurks just around the corner from the film's compassion and wholesome neighborliness. As for Frank Capra, as he prepared to make the movie, he told the Los Angeles Times, "There are just two things that are important. One is to strengthen the individual's belief in himself, and the other, even more important right now, is to combat a modern trend toward atheism."

Which makes it all the crazier that when the movie first came out, it fell under suspicion from the FBI and the House Un-American Activities Committee (HUAC) as Communist propaganda, part of the Red Scare that soon would lead to the blacklist and witch hunt that destroyed the careers of many talented screen and television writers, directors and actors.

Screenplay credits on "It's a Wonderful Life" went to Frances Goodrich and her husband Albert Hackett, Capra and Jo Swerling, although a number of others took turns at different times, including Clifford Odets, Dalton Trumbo and Marc Connelly - not an unusual situation in Hollywood.  But a 1947 FBI memorandum, part of a 13,533-page document, "Communist Infiltration of the Motion Picture Industry," first went after the writers Goodrich and Hackett:

"According to Informants [REDACTED] in this picture the screen credits again fail to reflect the Communist support given to the screen writer. According to [REDACTED] the writers Frances Goodrick [sic] and Albert Hackett were very close to known Communists and on one occasion in the recent past while these two writers were doing a picture for Metro-Goldwyn-Mayer, Goodrick [sic] and Hackett practically lived with known Communists and were observed eating luncheon daily with such Communists as Lester Cole, screen writer, and Earl Robinson, screen writer. Both of these individuals are identified in Section I of this memorandum as Communists."

The memo goes on to cast doubt on the movie's storyline, in which Jimmy Stewart's George Bailey and his struggling savings and loan fight on behalf of the good people of Bedford Falls against the avarice and power of banker and slumlord Henry Potter, played by Lionel Barrymore:

"With regard to the picture `It's A Wonderful Life', [REDACTED] stated in substance that the film represented a rather obvious attempt to discredit bankers by casting Lionel Barrymore as a `scrooge-type' so that he would be the most hated man in the picture. This, according to these sources, is a common trick used by Communists.

This was part of an FBI evaluation of several Hollywood movies - others included "The Best Years of Our Lives" (which beat "It's a Wonderful Life" at the Oscars for Best Picture and Best Director), "Pride of the Marines," and Abbott and Costello in "Buck Privates Come Home."

Wait - it gets nuttier.  According to the media archival website Aphelis,  "Among the group who produced the analytical tools that were used by the FBI in its analysis of `It's a Wonderful Life' was Ayn Rand."

"Abbott and Costello Meet Ayn Rand" - what a comedy horror picture that would have made, scarier and funnier than their encounters with Frankenstein or the Wolfman. Rand's group told the FBI:

"The purpose of the Communists in Hollywood is not the production of political movies openly advocating Communism. Their purpose is to corrupt non-political movies - by introducing small, casual bits of propaganda into innocent stories and to make people absorb the basic principles of Collectivism by indirection and implication. Few people would take Communism straight, but a constant stream of hints, lines, touches and suggestions battering the public from the screen will act like drops of water that split a rock if continued long enough. The rock that they are trying to split is Americanism."

But redemption of an odd sort came for "It's a Wonderful Life" at the infamous October 1947 House Un-American Activities Committee hearings. Just days before the appearance there of the Hollywood 10 - writers (and one director) who refused to testify and subsequently went to prison - a parade of "friendly witnesses" (including Ayn Rand, Gary Cooper, Ronald Reagan and Walt Disney) came before the committee to insinuate and weave dark tales of Communist infiltration and subversion in the movie business. One of them was a former Communist and screenwriter named John Charles Moffitt. Aphelis reports:

"When asked by HUAC Chief Investigator Robert E. Stripling if Hollywood is in the habit of portraying bankers as villainous characters, Moffitt takes the opportunity to try to clear the reputation of Frank Capra's movie `It's A Wonderful Life:' he tries to argue that the film isn't, in fact a Communist movie."

MR. STRIPLING. The term "heavy" has been used here as a designation of the part in which the person is a villain. Would you say that the banker has been often cast as a heavy, or consistently cast as a heavy, in pictures in Hollywood?

MR. MOFFITT. Yes, sir. I think that due to Communist pressure he is overfrequently cast as a heavy. By that I do not mean that I think no picture should ever show a villainous banker. In fact, I would right now like to defend one picture that I think has been unjustly accused of communism. That picture is Frank Capra's "It's a Wonderful Life." The banker in that picture, played by Lionel Barrymore, was most certainly what we call a "dog heavy" in the business. He was a snarling, unsympathetic character. But the hero and his father, played by James Stewart and Samuel S. Hines, were businessmen, in the building and loan business, and they were shown as using money as a benevolent influence.

At this point, there was a bit of commotion in the hearing room.

THE CHAIRMAN. Just a minute. Come away. Everybody sit down. Will all you people who are standing up please sit down? And the photographers.

THE CHAIRMAN. Go ahead.

MR. MOFFITT. Well, to summarize, I think Mr. Capra's picture, though it had a banker as villain, could not be properly called a Communist picture. It showed that the power of money can be used oppressively and it can be used benevolently. I think that picture was unjustly accused of Communism.

Since then, the movie has been more than redeemed as it slowly became a sentimental and beloved holiday perennial. And if anything, its portrayal of a villainous banker has been vindicated a thousand fold as in the last seven years we've seen fraudulent mortgages and subsequent foreclosures, bankers unrepentant after an unprecedented taxpayer bailout and unpunished after a mindboggling spree of bad calls, profligacy and corkscrew investments that raked in billions while others suffered the consequences. 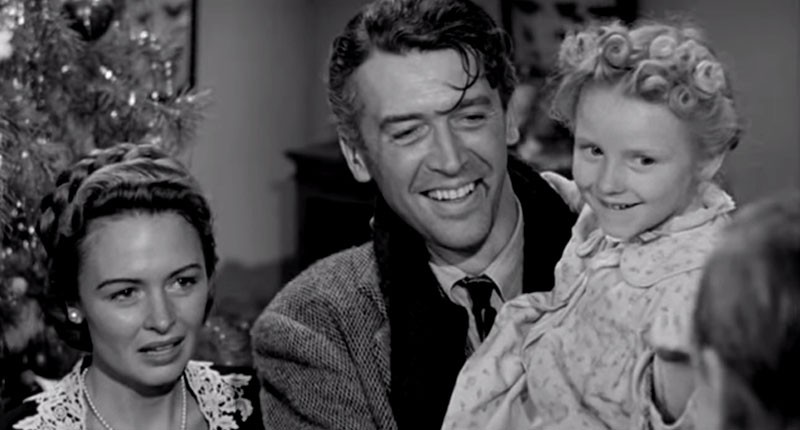 James Stewart and Donna Reed appear in the 1946 movie 'It's A Wonderful Life'
photo credit: RawStory

It's a wonderful life, alright, but not if you're homeless or unemployed tonight, not if your kids are hungry and you can't pay for heat. There are still a lot of Mr. Potters in the world. We know who you are and we'll keep calling you out. God rest ye merry, gentlemen.

[Michael Winship is the Emmy Award-winning senior writer of Moyers & Company and BillMoyers.com, and a senior writing fellow at the policy and advocacy group Demos.]