The Justice Department will issue findings Wednesday that accuse the police department in Ferguson, Mo., of racial bias. “If the report of the Department of Justice findings are accurate, then it will confirm what Michael Brown’s family has believed all along, and that is that the tragic killing of their unarmed teenage son was part of a systemic pattern of policing of African American citizens in Ferguson,” said Benjamin Crump, the attorney for Brown’s family. 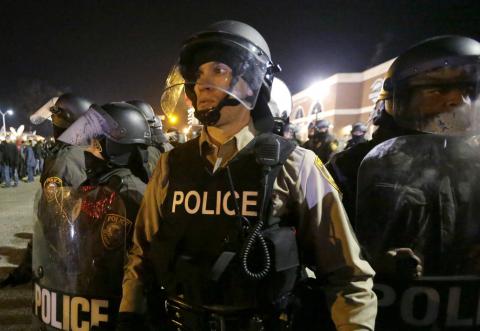 In this Nov. 25, 2014 photo, police watch the street as protesters gather outside the Ferguson Police Department., Charlie Riedel/AP

The Justice Department will issue findings Wednesday that accuse the police department in Ferguson, Mo., of racial bias and routinely violating the constitutional rights of black citizens by stopping drivers without reasonable suspicion, making arrests without probable cause and using excessive force, officials said.

Federal officials opened their civil rights investigation into the Ferguson police department after the uproar in the St. Louis suburb and across the country over the fatal shooting in August of Michael Brown, an unarmed black teenager, by Darren Wilson, a white Ferguson police officer. A grand jury in St. Louis declined to indict Wilson in November.

Outgoing Attorney General Eric H. Holder Jr. said last fall that the need for “wholesale change” in the Ferguson police department was “pretty clear.” In remarks two weeks ago, he said he was “confident that people will be satisfied with the results that we announce.”

In hundreds of interviews and in a broad review of more than 35,000 pages of Ferguson police records and other documents, Justice Department officials found that although African Americans make up 67 percent of the population in Ferguson, they accounted for 93 percent of all arrests between 2012 and 2014.

“If the report of the Department of Justice findings are accurate, then it will confirm what Michael Brown’s family has believed all along, and that is that the tragic killing of their unarmed teenage son was part of a systemic pattern of policing of African American citizens in Ferguson,” said Benjamin Crump, the attorney for Brown’s family.

The findings come as Justice Department officials negotiate a settlement with the police department to change its practices. If they are unable to reach an agreement, the Justice Department could bring a lawsuit, as it has done against law enforcement agencies in other jurisdictions in recent years. A U.S. official said that Ferguson officials have been cooperating.

As part of its findings, the Justice Department concluded that African Americans accounted for 85 percent of all people stopped by Ferguson police officers and 90 percent of all citations issued.

The Justice Department also plans to release evidence this week of racial bias found in e-mails written by Ferguson police and municipal court officials. A November 2008 e-mail, for instance, stated that President Obama could not be president for very long because “what black man holds a steady job for four years.”

The Justice Department did not identify who wrote this and other racist e-mails and to whom they were sent. Officials at the department spoke on the condition of anonymity to discuss the review and its findings before Wednesday’s release.

The review concludes that racial bias and a focus on generating revenue over public safety have a profound effect on Ferguson police and court practices and routinely violate the Constitution and federal law.

“This is not the full report, and we need to be careful not to rush to judgment as we saw in August,” said Jeff Roorda, a former Missouri state representative and a spokesman for the St. Louis Police Officers Association. “We owe it, not just to law enforcement, but to Michael Brown, Tamir Rice and Eric Garner to figure out what’s really going on here so it can be addressed. Reaching conclusions from statistics about traffic stops I don’t think draws the whole picture.”

The Justice review also found a pattern or practice of Ferguson police using unreasonable force against citizens. In 88 percent of the cases in which the department used force, it was against African Americans.

In Ferguson court cases, African Americans are 68 percent less likely than others to have their cases dismissed by a municipal judge, according to the Justice review. In 2013, African Americans accounted for 92 percent of cases in which an arrest warrant was issued.

Justice investigators also reviewed types of arrests and the treatment of detainees in the city jail by Ferguson police officers.They found that from April to September 2014, 95 percent of people held longer than two days were black. The police department also overwhelmingly charges African Americans with certain petty offenses, the investigation concluded.

The shooting of Brown on a Ferguson street on Aug. 9 set off days of often violent clashes between demonstrators and police in the streets of Ferguson.

Elected officials, protest organizers and community leaders renewed calls Tuesday for Ferguson Police Chief Thomas Jackson to resign — some adding that the department should be disbanded — and said the Justice Department probe should have gone further by investigating other municipal police forces in the area.

“I would speculate that the same pattern and practices of Ferguson exist in every other department in St. Louis County,” said Adolphus Pruitt, the president of the St. Louis NAACP, which has filed racial discrimination complaints against county police.

He added, “It’s time for the Ferguson police department to disappear.”

Justice Department investigators spent about 100 days in Ferguson, observing police and court practices, including four sessions of the Ferguson Municipal Court. They conducted an analysis of police data on stops, searches and arrests, as well as data collected by the court, and met with neighborhood associations and advocacy groups. The investigators also interviewed city, police and court officials, including the Ferguson police chief and his command staff.

In the past five years, the Justice Department’s civil rights division has opened more than 20 investigations of police departments, more than twice as many as were opened in the previous five.

The department has entered into 15 agreements with law enforcement agencies, including consent decrees with nine of them, including the New Orleans and Albuquerque police departments.